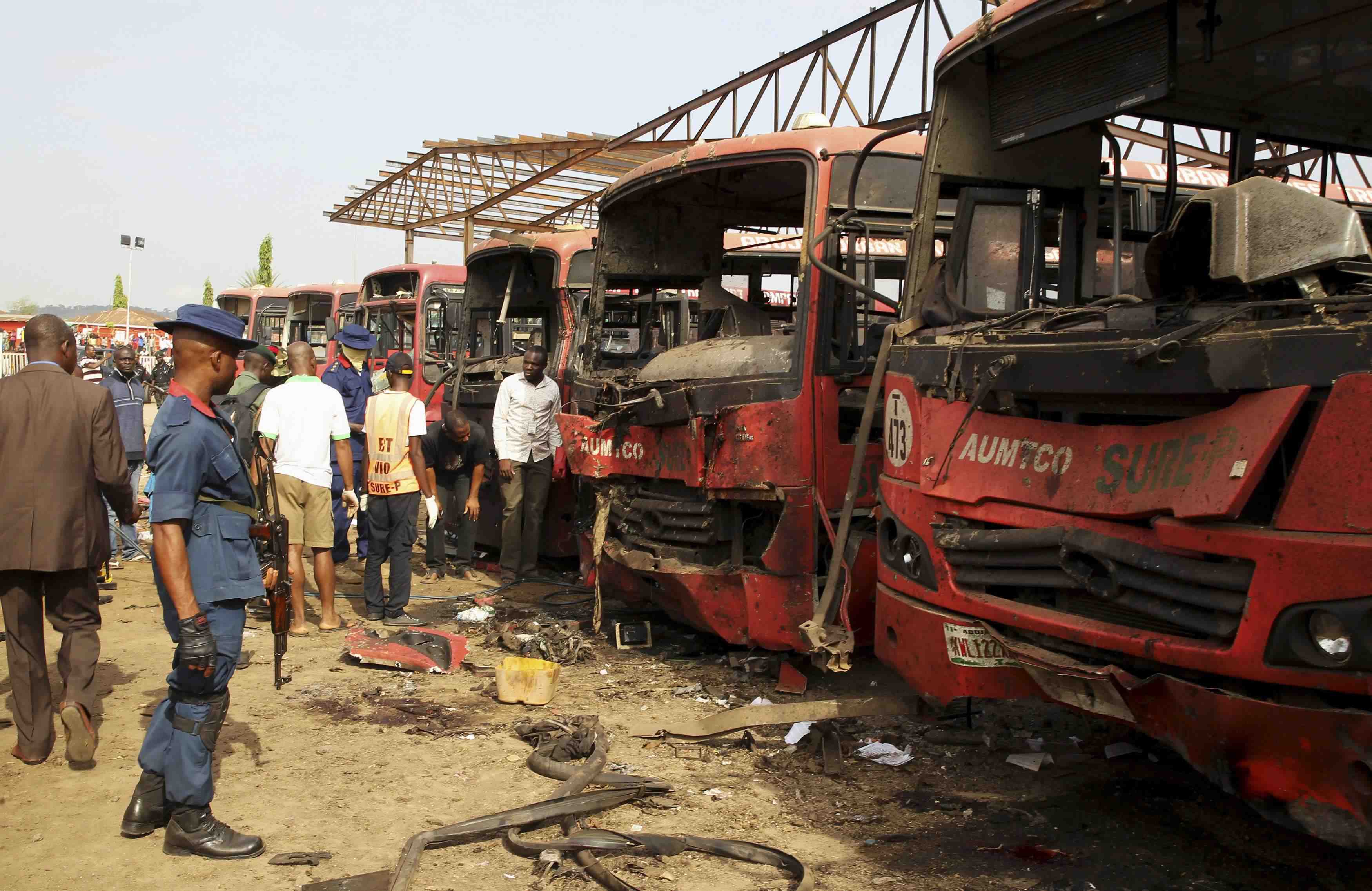 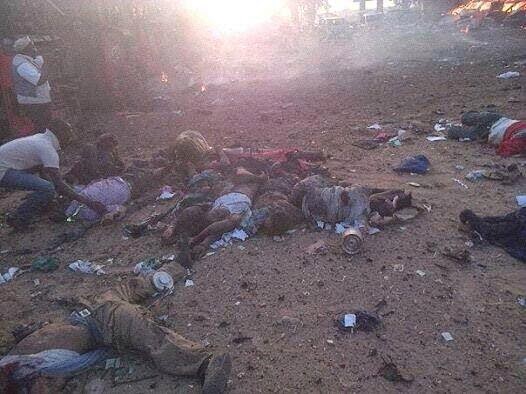 By Isaac Abrak and Camillus Eboh

ABUJA (Reuters) – A bomb at a crowded bus station on the outskirts of Abuja killed at least 35 people during rush hour on Monday morning, witnesses said, the first such attack near the Nigerian capital for two years.

Body parts and blood were strewn across the station and an unruly crowd of several hundred onlookers were roaming around with security forces unable to keep them away.

“I was waiting to get on a bus when I heard a deafening explosion then saw smoke. People were running around in panic,” said Mimi Daniels, who works in Abuja.

A Reuters cameraman saw 20 bodies at the station near Nyanyan bridge, about 8 km (5 miles) south of Abuja. A second Reuters correspondent saw at least 15 bodies separately loaded into waiting ambulances.

“More than two buses carrying workers were cut up by the blast,” witness Kingsley Ajimobi said. “I saw many people in the bus dead, and many were injured.”

Police and the military did not immediately respond to requests for comment.

There was no immediate claim of responsibility but suspicion is likely to fall on Islamist militant group Boko Haram, which has waged an increasingly bloody insurgency in the northeast.

Suspected Islamist militants killed at least 60 people in an attack on a village in northeast Nigeria late last week. Eight people were killed in a separate attack at a teacher training college. [ID:nL6N0N50W6]

The Islamists, who want to carve an Islamic state out of Nigeria, have in the past year mostly concentrated their onslaught in the northeast, where their insurgency started.

There had been no attacks near the capital since suicide car bombers targeted the offices of Nigerian newspaper This Day in Abuja and the northern city of Kadunain April 2012.

Security forces at the time said that was because a Boko Haram cell in neighbouring Niger state had been broken up.

A Christmas Day bombing of a church in Madalla, on the outskirts of Abuja, killed 37 people in 2011, although the main suspect in that attack is now behind bars.Boko Haram also claimed responsibility for a bomb attack on the United Nations’ Nigeria headquarters that killed 24 people on Aug. 26, 2011.

Boko Haram, which in the Hausa language of largely Muslim northern Nigeria means “Western education is sinful”, is loosely modelled on the Taliban movement inAfghanistan, and has forged ties with al-Qaeda-linked militants in the Sahara.

From the Associated Press:

An explosion blasted through a busy commuter bus station on the outskirts of Nigeria’s capital, Abuja, before 7 a.m. (0600 GMT) Monday as hundreds of people were traveling to work.

The blast ripped a hole 4 feet deep (1.2 meters) in the ground of Nyanya Motor Park about 16 kilometers (10 miles) from the city center and destroyed more than 30 vehicles, causing secondary explosions as their fuel tanks ignited and burned.

There was no official comment or an immediate claim for Monday’s explosion though bus stations are a favored target of Nigeria’s Islamic extremists.

The Islamic extremists have been threatening to attack the capital, in the middle of the country and hundreds of miles from its traditional base in the northeast, where it has killed nearly 1,500 people this year.

The Boko Haram terrorist network last attacked the capital in 2011 when it claimed a suicide bombing by two explosives-laden cars that drove into the lobby of the United Nations office building in Abuja. It killed at least 21 people and wounded 60.

The militants are blamed for attacks in northeast Nigeria that have killed more than 50 people in the past five days, including eight teachers living at a boarding school that had been closed because of frequent attacks on schools in which hundreds of students have died.

Boko Haram – the nickname means “Western education is forbidden” – has been attacking schools, villages, market places and military barracks and checkpoints this year in increasingly frequent and deadly attacks. Its mission is to force an Islamic state on Nigeria, Africa’s most populous nation of some 170 million people divided almost equally between Muslims living mainly in the north and Christians in the south.

The military has claimed that it has the extremists on the run with near-daily air bombardments and ground assaults on hideouts in forests and mountain caves along the border with Cameroon. – SAPA-AP