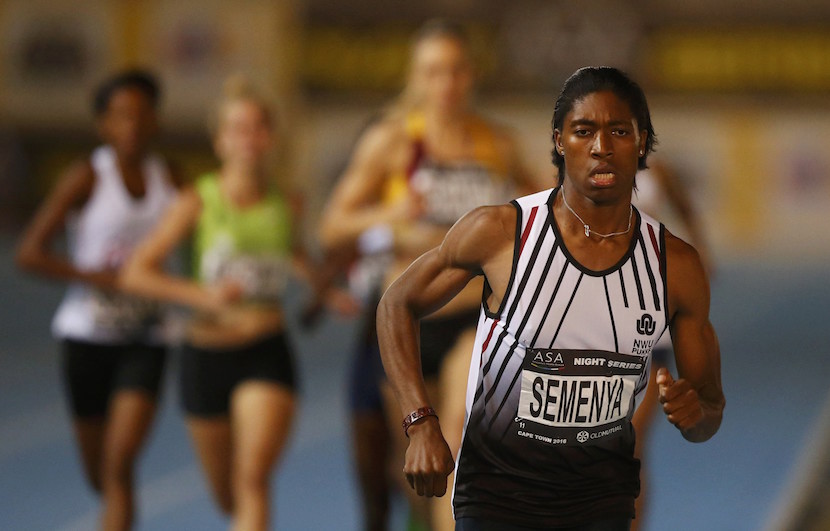 African athletics star Caster Semenya‘s participation in the Olympic Games has caused a stir in some circles. Some believe she might have too much male hormone testosterone circulating around her body to participate with the women. But as Silvia Camporesi, a bioethics expert, asks: there are so many other biological features that provide an advantage for sports stars, so where do you draw the line? She has a point. Earlier this week, the international media was awash with details on how US swimmer Michael Phelps manages to beat off the opposition. The Sun, for example, emphasised Phelps‘ disproportionately large wingspan and bucket-like hands and feet that help propel the swimmer through the water. The Telegraph described the most decorated Olympian of all time as a “bio-mechanical freak of nature”, with an ability to “hyper-extend his joints”. In addition, said the publication, Phelps has been “scientifically proven” to generate relatively little lactic acid, a chemical that makes most of us feel tired after a strenuous bout of exercise. Phelps’ biological variations are not regulated by sporting authorities, so why should Semenya’s? An interesting debate that is sure to hot up if the African runner wins gold on Wednesday, as many expect. – Jackie Cameron

The Court of Arbitration for Sport’s suspension of regulations on hyperandrogenism – a medical condition that causes an excessive amount of testosterone in the body – cleared the track for Indian sprinter Dutee Chand and other female athletes, including South Africa’s Caster Semenya, to compete at the Rio Olympics this year. Semenya is the favourite to win gold in the 800 metre final on August 21, and perhaps even break the world record.

In anticipation of her victory, the controversy around her supposed “unfair advantage” in competition has already started. South-African sport scientist Ross Tucker – who disagreed with the court ruling – also suggested that a good performance by Semenya or Chand, who challenged the International Association of Athletics Federations (IAAF) after they introduced the regulations, provides the IAAF with a reason to go back to the court and say “here you go – here’s your evidence”. Indeed, Semenya’s participation at Rio has been referred to as a “ticking timebomb”.

But even if testosterone did confer an athletic advantage, this advantage would not be unfair. This is because setting a limit on hyperandrogenism and singling it out from other biological variations that may confer an advantage is – at best – an inconsistent policy. There are plenty of other variations – biological and genetic alike – that are not regulated by the IAAF and, even though advantageous for athletic performance, are not considered unfair for competition.

More than 200 genetic variations have been identified that provide an advantage in elite sport. They affect a variety of functions including blood flow to muscles, muscle structure, oxygen transport, lactate turnover, and energy production. Endurance athletes in particular have been shown to have mitochondrial variations that increase aerobic capacity and endurance. An increasing number of performance-enhancing polymorphisms (genetic variations found at an increased frequency only in elite athletes and that make them who they are) are identified by sports geneticists.

Why pick on hyperandrogenism?

So then why is hyperandrogenism singled out as a biological variation that makes competition unfair? It is singled out because it challenges our deeply entrenched social beliefs about women in sport in a way that other variations do not.

And what we see when we look at these women’s bodies is used as a visual trigger for testing. The “infamous” Ferriman and Gallwey Hirsutism scoring sheet developed in 1961 was included in the appendices of the IAAF regulations to “visually score athletes” who may then be targeted for testing (these documents have since been taken off the IAAF website following the CAS ruling but can be accessed here).

Last year, the Court of Arbitration for Sport requested that the IAAF demonstrate a “correlation” between levels of testosterone in female athletes and competitive advantage. The panel explicitly stated that the IAAF assumption (that increased testosterone confers an advantage) “may well be proved valid” but sufficient evidence had not yet been providedto show the correlation. Currently, the “onus of proof remains” on the IAAF.

But the court’s decision should have instead been that there is no level playing field in sport. Olympic athletes are way out at the tail ends of the Gaussian curve of normal species functioning because of all kinds of genetic and biological variations that, together with character traits such as mental toughness, make them who they are: elite athletes. That’s why they’re there, competing, and we’re here, writing and reading about them.

Is it wrong that Michael Phelps has lungs twice the size of "a normal person", or hyper mobile ankles? Exactly! #Caster4Gold #CasterSemenya

Under IAAF regulations, women such as Semenya and Chand would have been forced to take androgen suppressive therapy – in the absence of a medical condition – something that Chand refused to do, saying “I am who I am”. Thousands of women are affected by hyperandrogenism, which does not pose an immediate threat to health, as medical evidence shows. Androgen suppressive therapy is therefore unnecessary and could create health problems instead. The call for suppression therapy is medical imperialism and a direct consequence of the male hegemony that dominates sports. Combined with the myth of a level playing field in elite sport, they reinforce each other in the search for a mythical master molecule that neatly divides the two sexes.

The fact remains that female athletes who do not conform to the norms imposed by society, and who significantly outperform their female peers, are challenged under the guise of biological or genetic abnormalities that bestow an unfair advantage.

Sport is political. Sport reflects our society. We see this all the time, with the doping scandal and the inability of the IOC to punish the state that had been sponsoring doping. This decision about hyperandrogenism is about women in sports and women outside sports. Semenya’s case would never have happened if she had not run so damn fast.

Our society is still afraid of women who run too fast, who speak too loud, who are too good, who can be president. This is what this is about. Let’s not be bamboozled by discussions of fairness in sport. There is no level playing field in sport. These Olympics will be a test and a reflection of the state – and the health – of our society. Are we ready? Semenya is. Chand is. Go Caster. Go Dutee. Go and break that glass ceiling, and that world record.