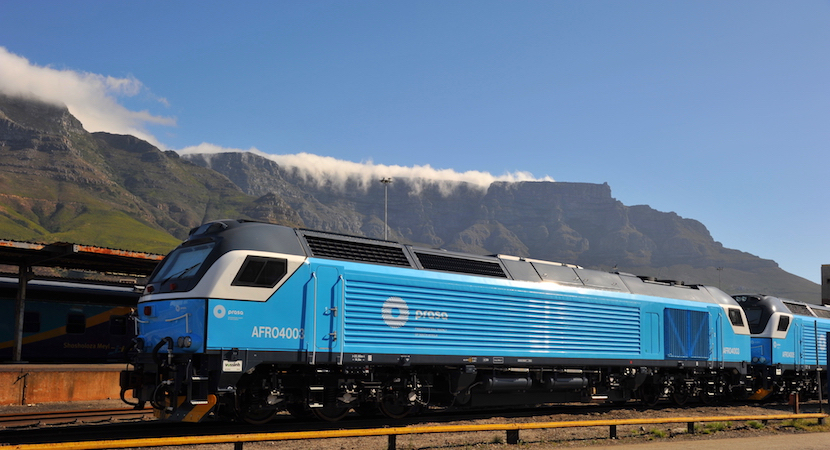 CAPE TOWN — The bang with which the PRASA board ended its tenure yesterday, contrasted with the whimpers of its impugned former CEO, Lucky Montana, plus the two Transport Ministers it accuses of dereliction of duty, epitomises Zuptoid SOE capture. Outlining steps taken to safeguard PRASA’s future and its compliance with Advocate Thuli Madonsela’s recommendations in her “Derailed” report, Popo Molefe, the outgoing board chairman, exposes chaotic, ham-handed political corruption and interference.  PRASA’s R2.6bn deal with Swifambo Rail Leasing, the now-bankrupt company awarded a contract to commission 4,000 rail locomotives too tall for our rail network, was declared unlawful. The board is also taking steps to force law enforcement agencies to act against wrongdoers – countering a politically-induced paralysis prolonging every aspect of SA corruption. Then, the most telling blow; both the incumbent and previous transport ministers, (Dipuo Peters and Joe Maswanganyi), interfered with the board, tried to dissolve/undermine it and stop internal corruption probes. Court rebukes didn’t deter them. The board had ‘lost all confidence’ in the independence/ability of Maswanganyi to fulfil his statutory mandate. Yesterday, R8.22m worth of agreements between former PRASA consultant/CFO, Fenton Gastin and his now-besieged pal, Montana were declared legally invalid. And one wonders why Montana harks nostalgically back to Sfiso Buthelezi’s days as PRASA chairman? The very man Treasury concluded should be criminally charged? ‘Nuff said. – Chris Bateman

The outgoing Board of PRASA has successfully completed its tenure, during which significant strides were made, in accordance with the recommendations of the erstwhile Public Protector in her report entitled “Derailed”, to address long-standing corruption and governance issues at PRASA.

To this end, the Board instituted and completed significant investigations at PRASA and, consequently, embarked on litigation to unwind unlawful and corrupt transactions. The Board’s efforts have been vindicated most recently by the judgment of Francis J in PRASA v Swifambo Rail Leasing (Pty) Ltd, in terms of which PRASA succeeded in setting aside an unlawful contract amounting to approximately R2.6 billion. The Board has also taken steps to compel the law enforcement agencies, including the National Prosecuting Authority and the Directorate for Priority Crime Investigation, to act against the wrongdoers.

The Board’s successes have been achieved despite the interference and undermining of its activities by the Minister of Transport. The Board overcame the erstwhile Minister of Transport’s irrational and unlawful attempt to remove the Board in March 2017, successfully instituting urgent proceedings to obtain an order from the High Court reinstating the Board, whose members have been unlawfully removed by the erstwhile Minister. The current Minister of Transport has, however, continued to attempt to thwart the operations of PRASA and prejudice its attempts to address “Derailed”. In this regard, the Board notes that:

As such, the departing Board does not believe that the Minister has PRASA’s best interests, and the interests of the public, at heart. The Board has thus sent detailed written submissions to the President, the Speaker of the National Assembly and the Public Protector in order to highlight its concerns and express its lack of confidence in the independence and ability of the Minister to fulfil his statutory mandate.

The Board hopes that its concerns will be noted and that urgent steps taken to address these concerns. Failure to do so may mean that PRASA’s mandate and critical work will be imperilled, and the Board’s function in fighting corruption and maladministration fatally compromised.

Cape Town – Former chief financial officer and consultant at the Passenger Rail Agency of SA (Prasa) Fenton Gastin must pay back R8.22m to the agency, the high court in Pretoria has ordered.

The court declared certain agreements of employment and consultancy between Gastin and former Prasa group CEO Lucky Montana unlawful, invalid, void from the start and of no force and effect.

Prasa applied to have a contract for professional services regarding finance and strategic advice concluded on September 30 2014 between Montana and Gastin declared unlawful and invalid.

Prasa asked for Gastin to pay back R8.2m relating to certain contracts. The amount included about R3.4m as part of a “mutual separation” agreement between Montana and Gastin dated July 16 2013, and about R4.9m in payments made to Gastin in terms of a consultancy agreement of September 30 2014.

In an affidavit to substantiate the application on behalf of Prasa, Sipho Sithole, group chief strategy officer of the rail agency, explained that Gastin is a former Prasa employee.

According to Sithole, the history of Gastin’s employment at Prasa demonstrated that he and Montana maintained a relationship with the purpose of defrauding the rail agency.

JUST IN: OUTA is concerned that the PRASA investigation and prosecution is taking far too long to come to fruition. pic.twitter.com/xCrr9jNe9Q

No board resolution to approve appointment

“After a diligent search no board resolution was found approving this appointment,” said Sithole.

A clause in the contract stated Prasa would compensate Gastin a six-month payout if his employment of group chief risk officer was terminated.

Sithole states, however, that by becoming chief financial officer, Gastin’s remunaration increased from R2m to R3m per year.

“There was no legal basis for (Prasa) to compensate (Gastin) on the basis that his appointment as the group CFP had terminated his permanent employment,” stated Sithole.

In his view, the payment of the compensation was a “deliberate ploy” by Montana and Gastin to pay the latter monies not legally due to him.

Later in his affidavit, Sithole said “it is wholly inexplicable that an employee’s contract of employment could be terminated on the basis that the trust relationship between the employer and employee had irrevocably broken down, only to have the same relationship restored on the very day of termination, moreover at an increased remuneration and for an indefinite period.

“It is my submission that this was simply a further attempt to defraud (Prasa)”.

Minutes of a board meeting in November 2014 reflect that Montana advised the board that Gastin had retired.

“In doing so Montana clearly misled the new board…as (Gastin) was already contracted as a consultant of Prasa from September 30 2014,” stated Sithole.

The consultancy agreement was for five years with a guaranteed minimum commitment of R19.44m – payable regardless of whether services were actually rendered.

Sithole stated that in his view the appointment of Gastin was unlawfully made and that the consultancy contract was concluded in a “clandestine manner”.

Sithole also pointed out in his affidavit that in a report by the Public Protector in August 2015 she refers to numerous irregularities at Prasa and directed the organisation to investigate the matters.

“I can confirm that (Prasa) has taken steps as directed by the Public Protector,” stated Sithole.