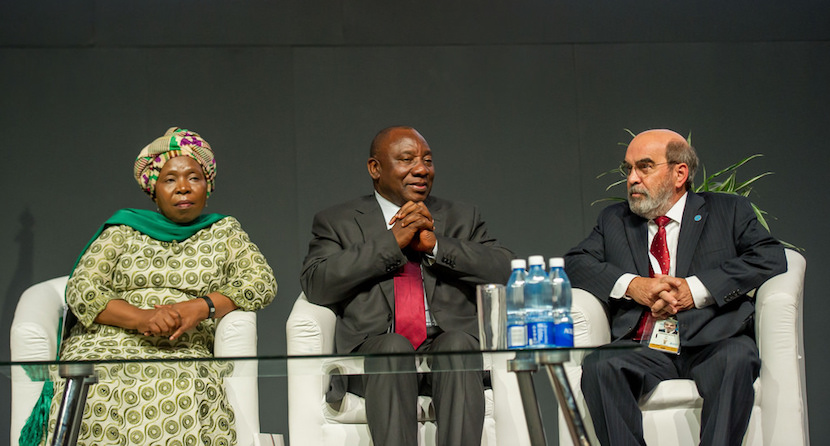 JOHANNESBURG — The race to succeed Jacob Zuma as ANC president has, so far, been dominated by two front-runners: Cyril Ramaphosa and Nkosazana Dlamini-Zuma. Both politicians have hogged headlines with reformists rooting for Ramaphosa while traditionalists have been seen to back Dlamini-Zuma. But in this piece, the sharp pen of Errol Horwitz dismisses both ‘candidates’ as being unfit to govern. Of course, the situation is changing rapidly regarding this much-anticipated leadership race. It may be the case in the end that neither Ramaphosa nor Dlamini-Zuma will, in fact, walk away with the top prize. Horwitz doesn’t mention one remote factor. That is, there is an outsider, Zweli Mkhize, who is positioning himself as a unifier, and he’s on the rise. It’s not over until the fat lady sings… – Gareth van Zyl

Cyril Ramaphosa and Nkosazana Dlamini-Zuma are the frontrunners in a race to replace Jacob Zuma as leader of the ANC, and ultimately as South Africa’s president.

Until recently it was expected that Dlamini-Zuma would succeed her ex-husband, Jacob Zuma. However, a recent High Court ruling declaring the 2015 KwaZulu-Natal ANC party conference void changed the dynamics of the ANC’s upcoming elective conference. The ruling has meaningfully energized Ramaphosa’s campaign as the ANC’s next leader.

No matter who wins the race the question remains: who best will serve the interests of all South Africans? The answer is a simple one: Neither of them. So what are the issues that militate against supporting these two front-runners. Significantly the following:

Let’s begin with Ramaphosa, an experienced politician – affable, politically savvy and disarming. He generally makes a good impression –  not difficult when compared to his ANC comrades.

He is uber rich, and would have no interest in feathering his nest – anathema to those comrades accustomed to feeding at the public trough. This, however, does not necessarily mean South Africa can correct its course under Ramaphosa’s leadership. Far from it, because there is another side to Ramaphosa that forestalls giving him the keys to the kingdom.

Whatever the outcome, the December ANC leadership deciding conference will end many a political career. This will be the most ruthless one.

For years Ramaphosa refused to dust off his moral compass. His blind loyalty to the ANC collective was absolute. His silence following multiple incidents of corruption and looting of state resources by his ANC comrades was deafening. The fact that he did not speak out is indicative of symptoms of moral deficit disorder wrapped-up in a reservoir of political expediency and opportunism.

In a perfect parliamentary system a ruling political party chooses its leader within a framework focusing on the long-term good of the country – this means a leader vested with statesmanship as opposed to being a political hack. As a prerequisite to statesmanship the qualities of integrity, responsibility, accountability, conscience and character are essential.

Such qualities do not, however, matter in the ANC’s paradigm for replacing Zuma. The dynamic is simply a power struggle between competing factions. All that matters is factional self-interest between those who support Ramaphosa, and those who oppose him.

Ramaphosa, the well-connected billionaire politician does not need the trappings of the state to enrich himself. He has already acquired his riches from being a major beneficiary of gratuitous empowerment deals. He is beholden to his party for his wealth, and until recently refused, in the name of party loyalty, to distance himself from Zuma and his misdeeds. Until he threw his hat into the ring, he blindly supported and defended Zuma by dishing up rhetoric over reality, laced with side-stepping infuriating generalities. When recently confronted by the opposition to bring the likes of Faith Muthambi to account to parliament, Ramaphosa’s political impotence was glaringly evident when he plaintively responded that he was “just the deputy president” – meaning his role was simply one of a ceremonial nature devoid of substance.

As the ANC government’s loyal PR man, Ramaphosa has no qualms engaging in prevaricatory hyperbole. For example, in his 2016 Christmas message to the nation, Ramaphosa “thanked South Africans for making the country a better place for all”.

Millions of South Africans would unquestionably disagree that it is “a better place for all”. Ramaphosa is, however, correct in one respect: it is undoubtedly a far better place for him and his politically connected friends, while more than 30 million South Africans, based on conservative estimates, live in poverty, and in a permanent state of despair and hopelessness.

His Christmas message was replete with sanitised sound bites filled with platitudes and generalisations. Consider his reference to… “Significant efforts to address the challenges facing the country – like poverty, unemployment and inequality”. It made a good sound bite especially in dishing up rhetoric over reality – a tactic designed to evade addressing specifics as to “significant efforts”, because in reality, there were no such  “significant” efforts that could be attributed to his party.

As deputy president, Ramaphosa routinely employs sound bite speech. Consider again his unresponsive answers to parliamentary member extemporaneous questions. He will tangentially respond to the question, and then engage in vague generalization. In doing so, the person posing the question is either intimidated, confused, or frustrated, and backs down.

Ramaphosa’s lack of political will and independence decidedly raises serious questions about his ability to govern effectively. To add to the mix is a paradoxical tension between Ramaphosa’s intelligence and his judgment. Regrettably his intelligence does fail to equate with good judgment.

One merely has to recall his deafening silence in the wake of Nenegate by allowing political expediency to envelop his judgment. To put it bluntly: Ramaphosa is not his own man – he has been consumed by years of ANC relentless collectivism, fed by a generous helping of self-interest and the belief that his ascension to leader of the ANC and the country, after Zuma’s exit, was assured.

So much for Ramaphosa’s  best-laid plans when the Zuma faction turned on him, and opted to support Dlamini-Zuma as Zuma’s successor. It was only after the Zuma faction opted for Dlamini-Zuma that Ramaphosa found his cajones. Until then he failed dismally to speak out in parliament and elsewhere on Gupta leaked emails, corruption, or state capture, servile and feckless as a potted plant.

Now to Dlamini-Zuma, an imperious, uncharismatic and incoherent politician, whose political past establishes that in her world political aspirations override the welfare of people. This was evident at the AU where her performance as the AU’s commission chair was far less than flattering – in fact for many it was high time to say “goodbye and good riddance”.

According to one German media outlet she neglected crisis upon crisis from the Ebola epidemic that claimed many lives, to civil wars, and the deaths of African migrants trying to cross the Mediterranean to Europe. As one prominent Nigerian human rights activist put it: Dlamini-Zuma “didn’t know Africa and only cared about her ambitions back home. She just didn’t care about Africans”.

Without a United ANC, will not have economic emancipation. Leaders who want 2 be in leadership must commit to uniting tripartite alliance..

Nearer to home, one cannot forget Dlamini- Zuma’s role in the Sarafina scandal, her denialism with respect to the HIV/AIDS pandemic, and promoting a quack remedy, a toxic industrial solvent, for the treatment of HIV/AIDS. One wonders if Dlamini-Zuma and her political ally Thabo Mbeki ever felt a single ounce of remorse for their role in needlessly blocking AZT trials, and refusing to distribute antiretrovirals through the public health system to South Africans infected with the AIDS/HIV virus, with nothing to look forward to in life, other than waiting for a call from the Grim Reaper.

Inasmuch as Dlamini-Zuma’s campaign speeches provide a window into her thinking one thing is clear: conceptually her thinking is limited to a noun, a verb, and ending in ‘radical economic transformation’ or ‘land distribution’. Slogans that the ANC Women’s and Youth League endorse in their unconditional support for Dlamini-Zuma. The fact that she cannot coherently articulate RET is of no consequence. All that matters to her camp followers is a Dlamini-Zuma victory at the elective conference to ensure uninterrupted feeding at the public trough.

There are wild card candidates who have entered the race, but they lack the support to challenge the two front-runners. So, South Africa is in a take it or leave it situation. In either case the country will remain a nation deeply divided with little prospect for real positive change in the foreseeable future.