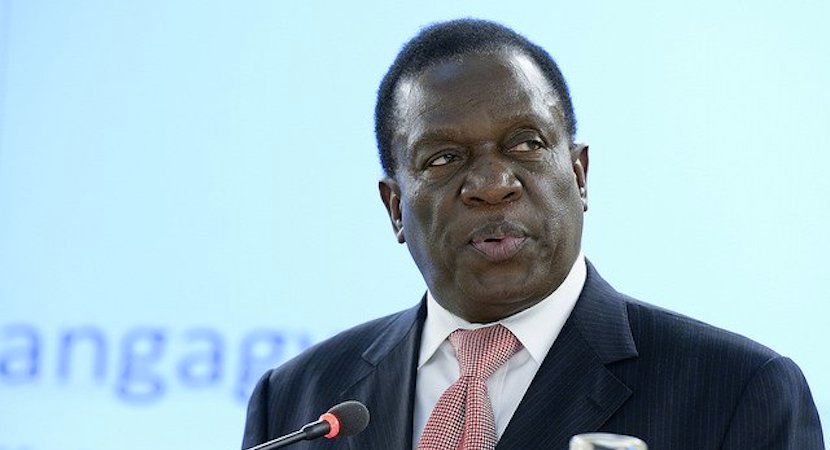 JOHANNESBURG — Zimbabwe’s heated political climate has gone up a notch today as the country’s former Vice President, Emmerson Mnangagwa, issued a stern warning to President Robert Mugabe. A clearly angry Mnangagwa – who was fired by Mugabe just weeks ago – has advised Mugabe to leave office or risk “suffering humiliation”. It’s a threat that shouldn’t be taken lightly, especially as Mnangagwa has the nickname ‘crocodile’ in Zimbabwean circles. Mnangagwa does have a controversial past of having carried out Zanu-PF’s dirty work, making his statement ominous. On the other hand, it also appears as if Mnangagwa is talking up fixing the economy once Mugabe is gone. Could Mnangagwa become the leader that Zimbabwe needs or another tyrant once Mugabe eventually departs? – Gareth van Zyl

My attention has been drawn to the Press Statement issued by the Commander of the Zimbabwe Defence Forces, General Constantino Guveya Chiwenga. I can confirm that President Robert Gabriel Mugabe made contact with me and invited me to return home for a discussion on the current political events in the nation. I told the President that I would not return home now until I am satisfied of my personal security, because of the manner and treatment given to me upon being fired. Given the events that followed my dismissal on Monday 6th November 2017 at 4.00pm, my security details assigned to me and at my residency were immediately withdrawn. This was contrary to all the protocols that have exited in Zimbabwe to former State Vice Presidents of the Republic of Zimbabwe. Security personnel, who are friendly to me, warned me that plans were underfoot to eliminate me once arrested and taken to a police station. It was in my security interest to leave the country immediately.

To me the voice of the people is the voice of God and their lack of trust and confidence in the leadership of President Mugabe has been expressed. Several groups including students, general workers, opposition party members, vendors, religious organizations and ordinary citizens led by our war veterans, our party members in Zanu PF, civic society, and all races of colour and creed in Zimbabwe clearly demonstrated without violence their insatiable desire to have the resignation of His Excellency, Cde Robert Gabriel Mugabe. This was done on the following dates:

The people of Zimbabwe have spoken with one voice and it is my appeal to President Mugabe that he should take heed of this clarion call by the people of Zimbabwe to resign so that the country can move forward and preserve his legacy. The ZDF Intervention through the Motto code named “OPERATION RESTORE LEGACY” is aimed at preserving the ethos of our struggle against British Colonialism which was led by the late Dr. J M N Nkomo, Cde Robert Mugabe and many others.

Sadly people have little patience for niceties and dignified exists . I am worried. #Zimbabwe

This fight included a struggle for social and economic empowerment which is all but lost now due to reasons clearly stated in the Impeachment Call by Zanu Pf Members of Parliament. The legacy or our struggle to unite the land with the people and the people with their land championed by our war  veterans and our people defended by the gallant fighters of the Defence Forces, Civil Servants, The Judiciary and our Government can be saved if His Excellency choses to do the right thing. His Excellency, Cde Robert Gabriel Mugabe has always said that if the people don’t want him he will leave office, now that they have spoken he must now ACCEPT the will of the people and resign. President Mugabe in his televised State of the Nation Address admitted to a number of a latent disregard to the interest of the people and dereliction of duty, surely after making such an admission common sense dictates that it should have been followed by an apology and immediate resignation to save the legacy of our struggle.

Why does Mnangagwa not feel safe to go back to Zim? Isn't he in the military's good books? #Zimbabwe

As promised in my last communication I will be returning home as soon as the right conditions for security and stability prevail. I look forward to returning home soon and to join in the struggle for the economic revival of our country which is so endowed with Agriculture, Industrial and Commerce, and Mining Opportunities and with a rich human resource bedrock to support our endeavours. My desire is to join all Zimbabweans in a NEW ERA where corruption, incompetency, dereliction of duty and laziness, social and cultural decadency is not tolerated. In that new Zimbabwe it is important for everyone to join hands so that we rebuild this nation to its full glory, this is not a job for Zanu PF alone but for all people of Zimbabwe.

In my conversation with the president I told him that there are two options, that is (a) to cooperate in the current negotiations with comrades from the defence forces for a peaceful resolution of this crisis, which would result in the preservation of his legacy. (b) that if he continues to dig in, in defiance of the will of the people, he might suffer humiliation because definitely the will of the people will prevail against one person. He requested me to come to State House, and l replied that l was out of the country, and that he had already removed my status as the vice president of the country, as such I had no status, however, l can only come at the invitation of my colleagues in the party and of the defence forces, when they feel that my security is guaranteed.

I am aware that parliament intends to impeach the president. Parliament is the ultimate expression of the will of the people outside an election and in my view is expressing national sentiment by implementing the Impeachment Proceedings therefore talks between myself and the President cannot supercede the expression and fundamental rights of fellow Zimbabweans. l am aware that the nation at large has been protesting against the incumbent and I believe they have a right to protest in terms of our constitution. I am also aware that the party has passed resolutions in terms of the party constitution. They have a right to do so. I will not stand in the way of the people and my party. I will go along with the wishes of my party and general population.

In conclusion, the destiny of our country is in the hands of our people and His Excellency must heed the call of the people to resign.