CAPE TOWN — Majority shareholder of the Mail and Guardian and a beacon of management non-interference in editorial affairs, Trevor Ncube, has pulled out of the financially struggling newspaper after stalwart efforts to go digital on a continental scale failed. He’s consolidating his media interests back in Zimbabwe in an ironic reversal of his historic newspaper ownership diversification. This speaks eloquently to his renewed faith in his homeland’s prospects. The M&G however, he backs to succeed under its’ new management, owning up to some mistakes he says he made in creating an all-Africa digital platform. His op-ed in the latest M&G speaks to Ncube’s corporate honesty and journalistic integrity as he negotiates the tricky politico-economic travails of the region – and does what he deems best for his consolidated future. Meanwhile, the M&G continues to disrupt the corrupt local status quo and prompt political change. As he observes, you couldn’t script the current scenarios. (This piece appeared on the Daily Maverick and is republished here with permission.) – Chris Bateman 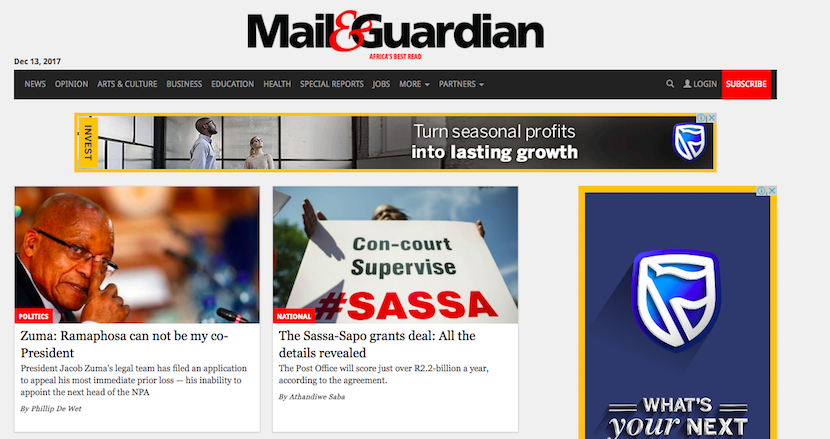 In September 2001, I was approached by the late Govin Reddy, at a function in Cape Town, who told me that the Mail & Guardian was for sale. I had known Govin from the time he spent in Zimbabwe in exile.

I had recently acquired full control of Zimind Publishers who owned two titles in Zimbabwe, namely the Zimbabwe Independent business weekly and the Sunday newspaper, The Standard.

This approach by Govin was an opportunity to spread my wings and diversify my risk. Within Zimbabwe, the economic and political situation was deteriorating and an investment in South Africa made sense.

In August 2002, after months of negotiations, I concluded a deal with the Guardian Newspapers UK, to acquire majority control of the Mail & Guardian.

In March 2002, shortly before my acquisition the company reported a loss of R15-million, and as I commenced my time at this institution, I came face to face with the reality of the fractious environment that prevailed internally, which had led to the Guardian divesting. The company was in dire need of a recapitalisation strategy, and together with Hoosain Karjieker, I set a plan in motion.

My motto then and now was: The Editorial Independence of the Mail & Guardian could only be guaranteed by the organisation’s ability to operate as a commercially viable entity. In short, this meant that I would never interfere with the duties of our journalists and editors.

We enjoyed many good years together with the MDIF, and when the initial facility was paid up, we received further funding to re-acquire our shareholding in M&G Online from the Naspers group. It could be argued that perhaps we overpaid Naspers to regain control of this important asset – the asset had been disposed of hastily before my time, and we negotiated with our backs against the wall.

The turmoil in the global media industry would, however, soon affect us too.

From 2009 onwards, we noticed a softening in print advertising revenues, and dwindling circulation. The world was going digital. And so we plotted a new path forward.

Armed with our full shareholding in M&G Online, unlocked from the shackles of the onerous shareholders agreement with Naspers, we embarked on an ambitious digital strategy – perhaps too ambitious in retrospect – that resulted in further losses to our bottom line.

I take full responsibility for the mistakes we made. And I know too that we were not alone in making these mistakes. Around the world media organisations everywhere are searching for the perfect solution for a commercially viable digital media publication.

Every publisher I know can relate to our own experiences – they too have embarked on digital paths that seemed so promising yet generally ended in failure.

This was the fate of our strategy to create a Pan-African platform that focused on telling the African story from an African perspective. Remember the extent to which the Africa Rising euphoria seemed to confirm this as a logical strategy.

Sadly the reality was somewhat different and we incurred losses from the M&G Africa venture. This was to have a knock on effect on the Mail & Guardian that, coupled with declining revenues in our core market, tested our ability to function effectively.

I have always believed that the M&G should remain a pillar of the South African democracy, and it should exist well beyond any single individual or shareholder.

Regrettably – much as I would have loved to – I am no longer in a position to invest in the M&G.

My partner of 14 years, the Media Development Investment Fund (MDIF), under the leadership of Harlan Mandel have put forward a compelling plan that will ensure the survival of the M&G well into the future. As part of this deal MDIF will be exiting from my media interests in Zimbabwe namely Alpha Media Holdings (AMH).

My Press Statement on changes in ownership of Alpha Media Holdings (Zimbabwe) and M&G Media(SA)
👇🏿 pic.twitter.com/pnwThZIkXo

Ownership of the M&G is equivalent to carrying a baton that gets passed on from generation to generation with just this underlying principle: Editorial independence is sacrosanct. I have often said my role over the past 15 years has been more of a custodian of a great South African asset than an owner.

When l took over the M&G its circulation was around 38,000 copies a week. The readership of the M&G was to peak at an all-time record of over 58,000 copies a week. In the time that I owned this important institution, I have had the pleasure of hiring and working with some of the most outstanding editors. In many ways, the M&G has prepared them for leadership in media.

Looking back on the decade and a half that I was at the helm of the M&G, I can say without a doubt that this august newspaper broke many of the stories that at the time seemed against the spirit of the rainbow nation. But as we now know with the State Capture series of stories, the M&G was brave enough to report on the stories that should have warned all of us not to assume that a pretty Constitution was enough of a safeguard against greed and corruption.

I would like to thank all those who have supported my vision and to acknowledge and celebrate those who have been a part of this institution during my tenure. A big thank you to the entire M&G board and to Peter Vundla who chaired the board with firmness and gentle wisdom.

I have known Hoosain Karjieker for more than 15 years and I am pleased that he has been chosen as the BEE partner of the M&G as it charts a new path.

Change is what keeps us media people awake at night. I am glad that the end of my stewardship of the M&G coincides with changing fortunes in my beloved homeland of Zimbabwe. You couldn’t script this kind of scenario. Thank you to everyone who has been part of this incredible journey.