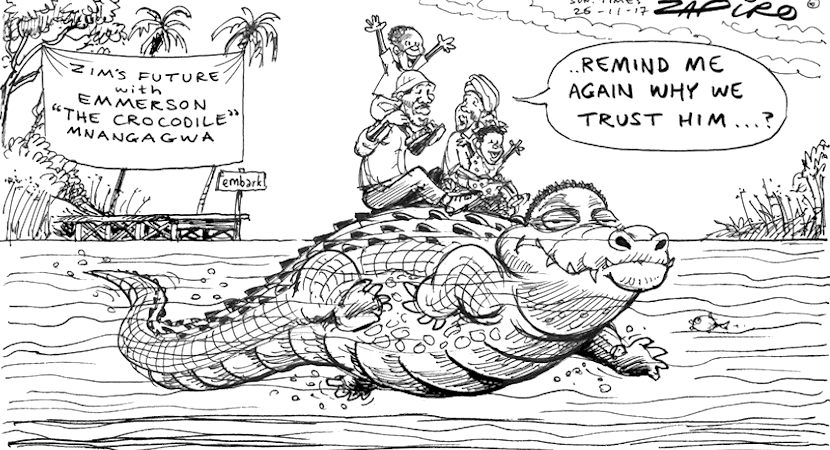 EDINBURGH — Life in Zimbabwe remains tough, with a small rich clique getting up the noses of most working age adults – nearly all of whom are unemployed and many having to resort to activities that are illegal or risky, like currency trading, to make ends meet. With the formal economy in tatters, people sleep on the pavements outside banks to increase their chances of being able to withdraw small amounts. Soon Zimbabweans will go to the voting stations to choose a leader. Standing for election will be Emmerson Mnangagwa, the man behind the coup that finally excised Robert Mugabe from power, and others who have thrived in an era in which democracy has been suppressed. Mngangawa is the front-runner, with suspicions that the election outcome will be rigged because Mnangagwa – nicknamed the Crocodile – was instrumental in fixing results in the Mugabe era. But even if there are no shenanigans with ballots and counting or intimidation, Mnangagwa together with Mugabe and associates, has made it his business over the years to eliminate serious contenders for the leadership of the country. That legacy leaves lingering doubts about his ability to transform Zimbabwe for the better. – Jackie Cameron

Zimbabwe is approaching the crossroads; an election date has been announced and we will go to the polls on Monday 30th July 2018. For the first time in 38 years we will have neither Robert Mugabe nor Morgan Tsvangirai as Presidential candidates. This is a critical, watershed period for our country.

For the last six months we’ve been living in a strange bubble, not knowing what to expect. Ever since the coup six months ago which removed Mr Mugabe from power, we’ve been bombarded with ‘good news’ propaganda from the ruling party (Zanu PF). They say investors are lining up, deals are waiting to be signed, companies are going to re-open, jobs are going to be created. They say that Zimbabwe is in a “new dispensation,” and that everything is different now. We keep looking at them and wondering exactly which country they are living in because for ordinary people nothing has changed in our daily lives in the 200 days since Mr Mnangagwa was sworn in as the President of Zimbabwe. As I write this letter there are at least five hundred people sitting on the pavements outside two main banks in my home town waiting for the chance to withdraw twenty dollars worth of their own money in the form of Bond coins. Businesses are barely hanging on, unemployment is still up in the 90% range and in every town, on every street, in every suburb, people are sitting on the ground trying to sell things in order to survive.

Aside from the disappearance of hundreds of corrupt traffic police and hundreds of brutal riot police with their boots, tear gas and baton sticks, the only thing that people say has changed in the past six and a half months is the man sitting in the President’s seat; a man who was a senior figure in Mr Mugabe’s government for almost four decades.

“Does a leopard ever change its spots?” This is something Zimbabweans are wondering as we anxiously count down the days to elections. It’s something I didn’t wonder when I saw a leopard recently. A few months ago just after dawn I saw some strange, dappled blotches of colour in the bush ahead. ‘There’s a leopard!’ I whispered excitedly to the friends I was with. We all watched as the animal lay completely still in the bush, not a flicker of its tail or a twitch of its whiskers; the leopard looked so beautiful, so peaceful, so dignified. Then a small herd of impala on the other side of the road began to cross the tracks in front of us. Without a sound or any warning the leopard sprang up out of the bush, leapt up, twisted round and caught an impala by the neck. As all the other impala ran and snorted in alarm and terror, the leopard stood completely still, regaining its composure, holding its kill, staring straight at us before turning away and taking the impala into the branches of a nearby tree.

Watching the video clips of a huge MDC demonstration calling for electoral reforms in Harare this week, was invigorating. Zimbabwe it seems, has found its voice again and the spirit of change is blowing in on the icy winds of winter 2018.