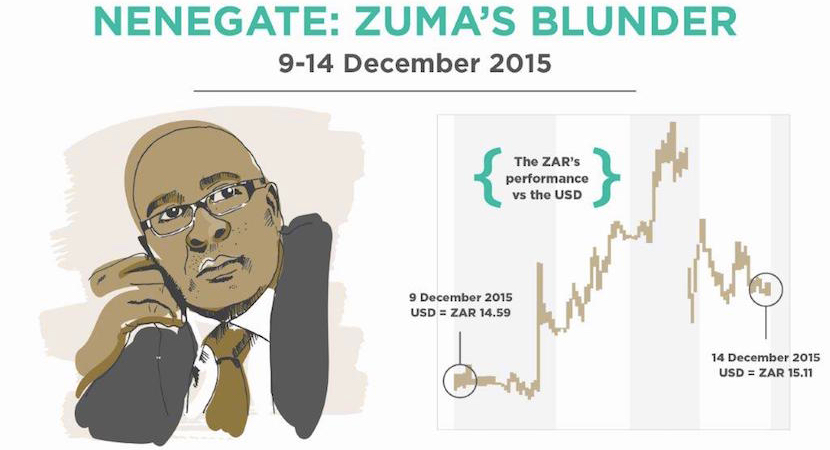 You might think national politics has nothing to do with you. However, Zuptagate – the political shenanigans involving President Jacob Zuma and his friends the Gupta family – is taking its toll on your investment portfolio. This was the stark reminder from listed life assurer Sanlam, which reported a decline in profit this week and pointed the finger of blame squarely at the presidency. Business conditions have become increasingly challenging, with a surprise short-term switch of finance ministers in 2015 dealing a severe blow to the country’s economy. That political incident, dubbed Nenegate because the finance minister who was replaced has the surname Nene, appears to have been sparked by a plan to get a Gupta-friendly finance minister, Des van Rooyen, in place. Van Rooyen was shifted aside quickly for Pravin Gordhan, but Gordhan has been under considerable political pressure after resisting moves by the Gupta family to help them with their banking relationships. There is widespread speculation that Zuma is planning to replace Gordhan soon, regardless of how such a move might affect financial markets. A decision to appoint disgraced former Eskom CEO Brian Molefe – a Gupta lackey who has been caught out lying – as an MP underscores Zuma’s disregard for public opinion about the role of the Guptas in influencing political decisions. Molefe is the man tipped to become the country’s next finance minister purely because he is pliant in Zupta hands. Sanlam’s financial reports are a reminder that the decisions at the top of the ANC have a very direct impact on the bottom line for business – and for investors who hold these businesses in their portfolios. – Jackie Cameron

Normalised headline earnings for the year ended December 2016 – the measure of profit in South Africa – was down to R8.4bn from R8.9bn in the previous year.

Sanlam CEO Ian Kirk said the group can sustain itself despite challenging conditions. “We expect the challenging operating environment and economic climate to persist in 2017,” he said in a statement.

“However, with the support and commitment from our staff, management and partners, we believe we have the opportunity to sustain our performance going forward.”

Sanlam said in its financial report that the “changes in Finance ministers in December 2015 sparked a sharp weakening in the rand and a significant rise in long-term interest rates at the end of 2015”.

It was referring to the disastrous replacement of Nhlanhla Nene with Des van Rooyen followed days later by his replacement with Pravin Gordhan as Finance Minister.

Sanlam said that the positive developments of cooperation between government, labour and business since then and South Africa’s ability to retain its investment grade foreign credit rating, supported a rally in the rand exchange rate.

“The rand strengthened by 12% and 26% against the US dollar and British pound respectively, with the pound weakening on a relative basis in the aftermath of Brexit. The rand also strengthened against the emerging market currencies where the group operates.”

It said that Sanlam Investment’s new business growth of 8% represents a satisfactory performance “given the difficult operating environment during 2016. Retail and institutional clients in South Africa took a cautious stance given political and investment market instability.”

“These included fears of lower than expected global economic growth driven by a slowdown in China and the soft commodity cycle, rising geopolitical risks and the impact of potentially opposing monetary policy stances by central banks in the US, UK, Europe and Japan.

“The fragile outlook for global economic growth was dealt a further blow at the end of the second quarter by the UK electorate’s surprise vote in favour of Britain leaving the European Union, signifying rising pressure in a number of countries for more protectionist policies. Protectionism also featured strongly in the US presidential elections.

“These conditions increased the pressure on the economic growth, currencies and investment market performance of the emerging market countries where the group operates with commodity-based economies such as Zambia, Nigeria and Angola particularly hard hit. The British pound was similarly under pressure.” – Fin24