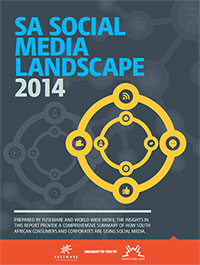 Social networking is truly on the rise in South Africa, the recent “Social Media Landscape 2014” study tells us, and the top brands of South Africa are intensifying their social-media activity.

The study, which has become the benchmark  for research on consumer and corporate use of social networks in SA, was released last week by World Wide Worx and Fuseware although the headline findings were made public last month.

Grubstreet was given a copy of the research report  (it is not given away for free; but sold) and our main take-home insights – with an interest in what the research means for SA’s media companies – include the following.

Of the 57 large South African brands surveyed in the study, 53% are planning to invest in training in-house staff in social media (fewer are considering using specialist agencies to manage social media) while 44% of the brands have increased their social-media budget allocation in 2013, compared with 2012. 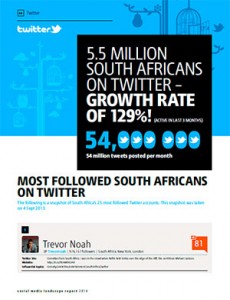 Another stand-out finding is that of the 57 brands surveyed, 67% are planning on creating mobile apps in 2014.

Does this mean that we can expect to see advertising budgets for traditional media decline due to this, I wonder. Why spend money on print ads, for instance, when you can use your own channels to deliver your message to your market?

World Wide Worx MD Arthur Goldstuck told Grubstreet: “You may be correct (on ad spend being diverted from traditional media to new media) but it is also likely that many brands are increasing their budgets specifically to allow for greater social-media spend. That said, the ideal is to have an integrated strategy that includes social media as part of the mix. That means that it’s not a case of shifting budget but rather integrating budget.”

The big South African media brands and companies themselves do not feature very highly on the lists of top-performing brands on social networks. (The top 50 companies were selected based on the official brand value index published by Brand Africa for August 2013 – and this year’s posts to the Facebook, Twitter and YouTube accounts of the respective companies were surveyed.)

In fact, only Media24 made the list for the top 50 “most valuable” brands across the social networks – at Number 22. When it came to the “Top 50 YouTubers” list, only FHM (Number 29), Uhkozi FM (Number 39) and eNews Channel (Number 46) of our established media brands put in a showing.

I think this is quite telling – and says how slow some of our traditional media companies have been in harnessing social networks to project their own brands.  Media companies after all should be on top of social media. 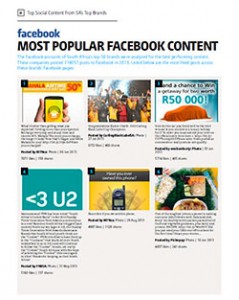 Boy, is mobile big in every way in this country, the study tells us, and social networking in inextricably linked with cellphone use.

The study found, for instance, that 87% of Facebook users and 85% of Twitter users are accessing these networks on their phones.

“At the end of June 2013, no less than 14.3-million smartphones were in use on South African mobile networks,” says World Wide Worx MD Arthur Goldstuck in his introduction to the study. “That figure is expected to pass the 16-million mark during 2014. Ultimately, most of these phones will be using some form of social network or instant messaging platform, suggesting social network penetration passing the 33% mark during 2014. If all of these were adult users, it would represent 50% of the adult population.”

Wow. Mobile is surely a crucial platform for news media in SA in the near future.

Eyewitness News that serves Primedia radio stations 702 Talk Radio, 567 Cape Talk and 94.7 Highveld Stereo launched its free mobile app last week, for instance, and it is promoting it heavily on the radio stations

Other fascinating findings and insights in the study include:

[box]SEE ALSO: SA online research: audience much bigger than we thought, Jan 2013, and Twitter a mine field for journalists: a survey of SA social media policies, Oct 2012[/box]