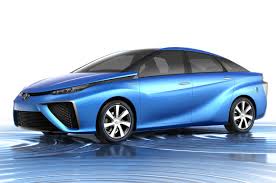 LAS VEGAS: Toyota will start selling fuel cell vehicles in the US in 2015, the company announced Monday at the Consumer Electronics Show.

Toyota pioneered and leads the hybrid vehicle sector with its popular Prius models. It said advances in fuel cell technology bode well for vehicles powered with it in the future. “We aren’t trying to re-invent the wheel, just everything necessary to make them turn,” said Bob Carter of Toyota USA.

Fuel cells work by combing hydrogen with oxygen to create electricity, with water vapour being the only by-product. Honda and Hyundai have both announced plans to release fuel-cell vehicles in the US in 2015.

Toyota’s previous estimate was that the technology would not be ready for the mass market until 2017. Toyota said each fully fueled cell could supply enough energy to power a house for a week, and that prototypes were regularly exceeding 480 kilometres per tank, a threshold believed to be crucial in attracting mainstream drivers.

The company also said it would help establish a network of hydrogen-fueling stations concentrated in California, where the state government has pledged 200 million dollars towards the effort. Toyota did not release the name or price of the vehicle, or reveal its target sales volume. – SAPA-DPA