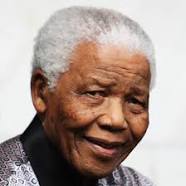 Announcing the project, which has the approval of the Nelson Mandela Foundation, Deidre Davids of Cape Town International Airport said that it is indeed a privilege to be part of this very profound celebration. Madiba’s footprints lie deep in Cape Town and this is a wonderful way in which we can honour him. We believe that the tapestry will receive a positive reaction from all visitors to the airport.

Art for Amnesty Founder Bill Shipsey warmly welcomed the decision of Cape Town International Airport to partner on this project and the opportunity it gave to Amnesty International and its artist supporters to pay tribute to the late President Mandela. “Nelson Mandela was an inspiration to all who struggle for freedom, justice and the protection of human rights. This tapestry will be a small reminder to all who pass through Cape Town International Airport of the man and the debt of gratitude we owe to him now and for all time”, said Shipsey.

Nelson Mandela received Amnesty International’s most prestigious Award, the ‘Ambassador of Conscience’ Award, in 2006. It was presented to him in Johannesburg by South African Nobel Literature Laureate, the late Nadine Gordimer.

The tapestry, which will take several months to complete, will be unveiled at a dedication ceremony at Cape Town International Airport scheduled for the end of this year. Further details will be announced in the coming months.

This is the third such Art for Amnesty memorial tapestry project. The previous two were dedicated to the late Czech President, dissident and playwright, Vaclav Havel and Irish poet and Nobel Literature Laureate, Seamus Heaney and were funded by musicians Bono and Edge of U2, Paul Simon, Sting, Peter Gabriel and Yoko Ono.

Cape Town International Airport is the gateway to the beautiful Mother City. It is Airports Company South Africa’s 2nd largest and Africa’s 3rd largest airport. It is also Africa’s premier tourist and VIP destination and has established a reputation as Africa’s international award-winning airport, consistently performing among the best in the world for service in its category.

Art for Amnesty is Amnesty International’s global artist engagement programme bringing together artists of all disciplines their management and supporters in a collaborative effort to support and promote the cause of human rights.

Amnesty International (‘Amnesty’) is a global non-governmental organisation focused on human rights with over 7 million members and supporters around the world. Amnesty conducts research and campaigns to prevent and end grave abuses of human rights, and to demand justice for those whose rights have been violated.