JOHANNESBURG, April 14 (Reuters) – South Africa’s Eskom said on Tuesday it will rehire 1,700 employees fired after a strike at the Medupi power plant the utility is building, in an attempt to end a row that has hobbled construction at the facility. 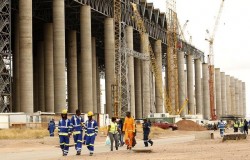 The contract workers were dismissed on March 27 for vandalising property during the one-day strike over better working conditions and higher pay. Thousands of their unionised co-workers stayed away from work on their own volition in solidarity with their fired colleagues, affecting construction.

“To reduce the levels of antagonism and intimidation against workers who want to work, we have decided to reinstate all 1,700 workers,” Eskom’s spokesman Khulu Phasiwe told Reuters.

The National Union of Metalworkers of South Africa, the majority union at the plant located in central South Africa, said it would present the offer to workers later on Tuesday.

“We will report back to our members today. I am confident that they will accept the offer,” Steve Nhlapo head of collective bargaining for the NUMSA told Reuters, referring to the agreement reached with Eskom.

Eskom has said the strike was not affecting work on Unit 6 of the plant, which is the section of the plant that is expected to start generating power in July.

Eskom has been forced to implement controlled power cuts in Africa’s most advanced economy this year to prevent the national grid from being overwhelmed.

South Africa’s government says the electricity outages are expected to last two years and that its economic growth forecast for 2015 could halve to 1 percent from 2 percent because of power constraints.