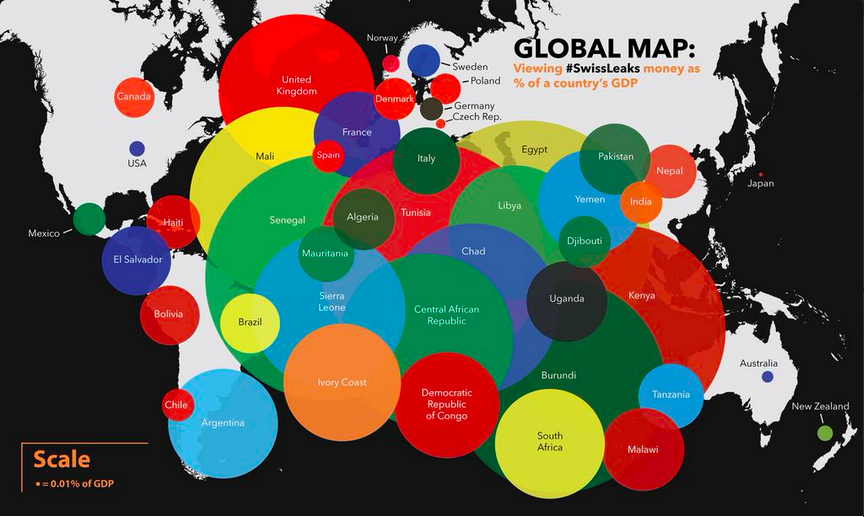 by Dane McDonald and News24 staffer

SwissLeaks Reviewed was a joint project by the FTC and Christian Aid.

In February Reuters reported that HSBC admitted to failings in compliance and controls in its Swiss private bank after media reports alleged it helped wealthy customers conceal millions of dollars of assets in a period up to 2007.

A re-examination of the SwissLeaks data as a percentage of a country’s GDP has yielded “staggering” results, according to Freymeyer.

At the time of the leak the equivalent of 0.57% ($2bn or approximately R28bn at the current exchange rate) of SA’s GDP was being held by SA citizens in HSBC Swiss bank accounts.

While 0.57% appeared small at first glance, Freymeyer cautioned that it represented one leak from one bank in one tax haven.

“So, in viewing this as just a fraction of what potentially sits offshore in South African assets, the number really comes into context,” he said.

In February HSBC reportedly threatened the Sunday Times over its article on the wealthy South Africans who held their cash in secret Swiss bank accounts.

The Sunday Times reported that the list of South African clients who held bank accounts with the bank in Switzerland was headlined by CEOs of top blue-chip companies, sports stars and a key figure in the controversial arms deal.

At the time the SA Revenue Service (Sars) said it was analysing the information.

The files were stolen in 2007 by the company’s former computer specialist Herve Faciani, who said he was alarmed how “banks such as HSBC have created a system for making themselves rich at the expense of society, by assisting in tax evasion and money laundering”.