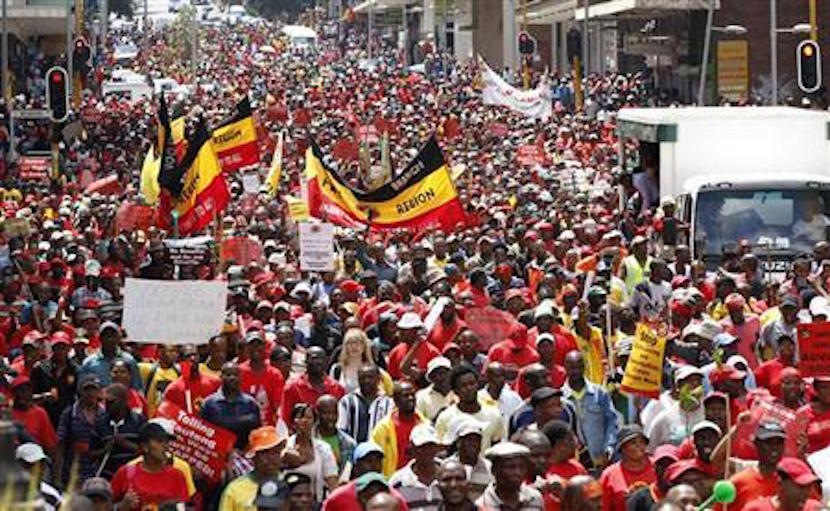 Key alliance partners in the ruling ANC are starting to join calls for President Jacob Zuma to step down. Just last Friday, the South African Communist Party (SACP) said it wanted Zuma to resign following his dramatic Cabinet reshuffle in which he purged Finance Minister Pravin Gordhan last week. And on Monday, ANC stalwarts called on Zuma to resign. The calls come amid the firing of Gordhan, which has sent South Africa’s markets into a tailspin and sparked a credit rating downgrade to junk status from S&P. Now, the country’s largest labour union federation Cosatu – which has previously backed Cyril Ramaphosa for ANC president in this December’s planned elective conference – has also taken aim at Zuma, calling on him to step down. Slowly but surely resistance to Zuma is growing. – Gareth van Zyl

During its press briefing to outline the outcome of Monday’s Central Executive Committee meeting, Cosatu general secretary Bheki Ntshalintshali said Zuma was responsible and culpable for the downgrade.

“It is his inattentive and negligent leadership and disruptive actions that have emboldened these agencies to interfere in this country’s political affairs.”

Cosatu said it would be calling for Zuma’s resignation. The trade union federation believes the Gupta family influenced Zuma’s late night decision to reshuffle his Cabinet.

It also believed the reasons for S&P’s junk status rating centre on political uncertainty, which it views as an “interference in our domestic political affairs which should be beyond their scope of work”.

Cosatu president Sdumo Dlamini said he believed S&P was boldly acting out in anger over the Cabinet reshuffle.

“We do not take their decisions lightly. At the same time, we do feel they have ventured in too deep. They meddle with political battles in the country. When they act in a manner that makes us think that their reaction is political, I believe they have said what they are saying in anger.”

Dlamini said the country and its workers should not fear advancing radical transformation because of rating agencies.

“That fear will not take us anywhere as South Africa.”

It however did express concern over the implications of the rating downgrade.

Ntshalintshali said the possibility that government would have to raise taxes to fund its spending is worrying.

“We are worried because the junk status will have inflationary results as it would result in an increase in borrowing costs, not only for government but across the economy.

“Currently South Africa owes more than R2.2trn, which is more than 50.7% of the national income, and pays R160bn per annum in interest, which is very close to what government spends on social grants.”

Moody’s subsequently issued a statement indicating that South Africa has been placed on review for a downgrade, and said it would make its announcement by Friday.