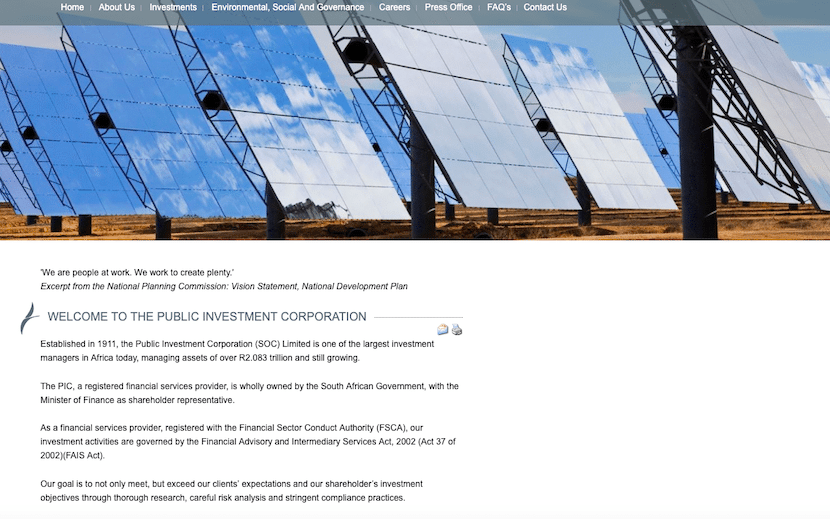 Updated with the comments from the PIC below.

(Bloomberg) – Africa’s largest fund manager is said to be considering financial services executive Kennedy Bungane to head the institution, according to people familiar with the matter.

Responsible for most South African government workers’ pension funds, the Public Investment Corp. is being probed over allegations of wrongdoing that are currently a subject of a judicial commission of inquiry and resulted in a host of senior departures, including that of Chief Executive Officer Dan Matjila.

The PIC, which manages more than R2trn ($143bn) in pension funds, plans to hire Bungane to ensure better governance at the Pretoria-based fund manager, said the people, who asked to remain anonymous because the plans are private.

Bungane, 44, has a bachelor’s degree in corporate and investment finance, an MBA in advanced corporate finance from the University of Pretoria and completed an advanced management program at the Harvard Business School.

He was head of Barclays Africa Group Ltd. outside South Africa and in 2014 became CEO of Pembani Group, a black-owned investment house that combined its assets with now-President Cyril Ramaphosa’s Shanduka Group.

Prior to working at the Barclays unit, he was head of South African corporate and investment banking at Standard Bank Group Ltd. He is also the founder-chairman of Idwala Capital, a fixed-income asset manager. If appointed, he would be the first private sector appointee and youngest CEO of the PIC to date.

The final report by the judicial commission on wrongdoing at the government worker’s pension fund manager is expected by the end of July. Following this, Bungane could take the role as permanent CEO, said the people. Bungane resigned as Pembani CEO at the end of February this year, they said.

Reports on appointment of PIC CEO are speculative

The Public Investment Corporation (PIC) has noted media reports regarding the process of appointing its new Chief Executive Officer, suggesting that a certain individual is touted as a potential candidate.  These reports are speculative and baseless.