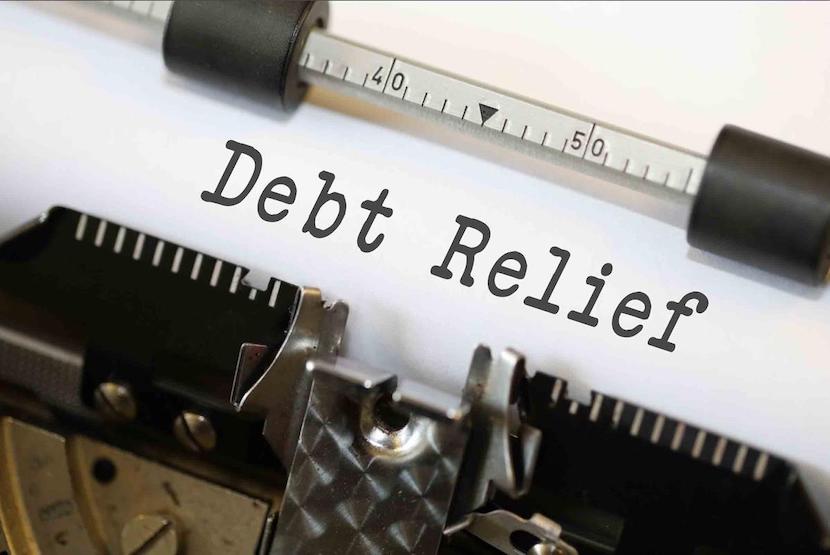 Minister of Finance Tito Mboweni delivered his emergency Supplementary Budget to the nation on Wednesday. The Covid-19 pandemic has hammered the South African economy, with the national lockdown implemented to combat the spread of the Covid-19 virus bringing most business activity to a standstill. The South African economy is now expected to shrink by 7.2 per cent in 2020, the largest contraction in nearly 90 years. Mboweni said the Treasury’s early projection is that gross national debt will be close to R4 trillion, or 81.8% of GDP by the end of this fiscal year. South Africa was struggling before the pandemic emerged, and is now working to avoid a sovereign debt crisis. – Nadya Swart

South Africa too rich for relief even as fiscal reckoning looms

(Bloomberg) – Too rich for debt relief available to most African nations and hobbled by its politics, South Africa is facing a public financing crisis.

Debt levels will continue to rise, peaking in 2024 and only dipping back below 80% of gross domestic product by 2028, according to the supplementary budget Finance Minister Tito Mboweni presented on Wednesday. And that’s a best-case scenario, where the government takes active steps to stabilise the trajectory and revives an economy which the Treasury projects will contract by 7.2% this year.

“Debt is our weakness,” the minister said in his budget speech. “Even as South Africa responds to the current health and economic crisis, a fiscal reckoning looms. The public finances are dangerously overstretched.”

Mboweni’s adjustment budget and forecasts accounted for the impact wrought by the coronavirus pandemic as well as the nation’s response so far: a 500 billion rand ($29 billion) stimulus package. But the former Goldman Sachs Group Inc. adviser’s plans to trim spending and enact structural reforms face stiff opposition, including from labor groups aligned with the ruling African National Congress. 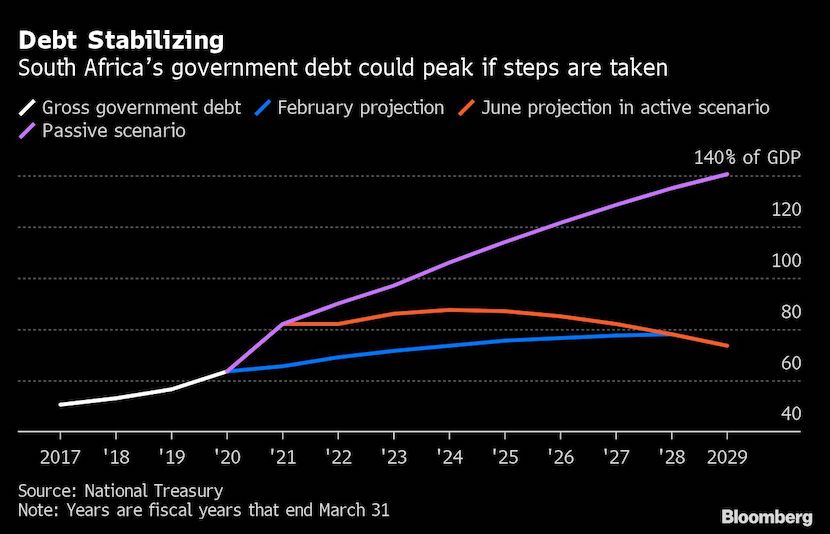 South Africa’s fiscal decline accelerated over the past decade as loss-making state-owned companies including Eskom Holdings SOC and South African Airways received a series of bailouts and the government repeatedly failed to rein in public sector wages.

The country lost its investment-grade credit ratings, which exacerbated the problem by boosting borrowing costs at a time when debt repayments already crowd out spending on development.

Yet despite the rapid deterioration in its finances, South Africa’s status as a middle-income country with a relatively large gross domestic product bars it from coronavirus debt-relief initiatives other countries in Africa can lean on in such a crisis. It is, in fact, a member of the Group of 20 developed economies, which has pledged to suspend payments on official loans for the world’s poorest nations, most of them in Africa. 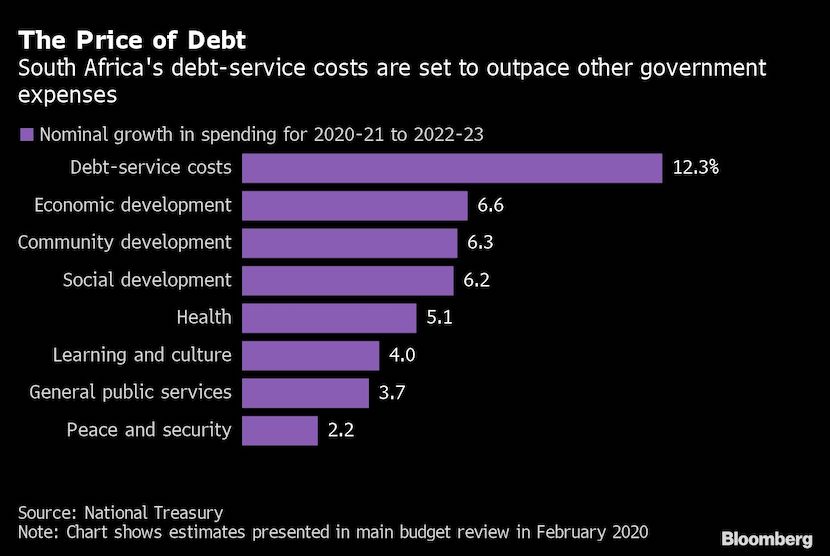 Even before the pandemic, South Africa was stuck in its longest downward economic cycle since World War II and the economy was in recession. Revenue collection is expected to plunge as a lockdown that began in March to curb the spread of the virus weighs on activity.

“We were in a fiscal crisis before the virus,” said Dawie Roodt, chief economist at Efficient Group in Pretoria.

Plans to reduce the public-sector wage bill, which has climbed by 40% over the last 12 years, have stalled in the face of opposition from politically influential labor groups. Reforms proposed in a National Treasury policy paper, forecast to lift economic growth by 2 to 3 percentage points and create more than one million jobs over a decade, remain dormant.

The pandemic has forced the ruling party to break a long-held resistance to borrowing from the International Monetary Fund, requesting a $4.2 billion loan to cover virus-related spending.

But warnings it may require additional budget support and have to follow a structural-reform program mandated by the Washington-based lender are unlikely to be heeded ahead of municipal elections next year, said Ralph Mathekga, a political analyst and author of books about South African politics.

“Populist measures become what sustains them election on election,” Mathekga said of a party that’s ruled the nation uninterrupted since 1994. “It is highly unlikely that they can undertake austerity measures.”

“Although South Africa’s debt burden is going to rise, most of its debt is denominated in local currency. This together with the relatively long maturity profile and the deep and liquid nature of our local capital market mitigates the risk of default. Weak underlying structural growth, limited fiscal reform and continued SOE bailouts will continue to pose the biggest risks to South Africa’s debt outlook.”

Charts that show the troubles presented in South Africa’s budget

(Bloomberg) — South African Finance Minister Tito Mboweni has presented a special adjustment budget after the coronavirus and measures to curb its spread wreaked havoc on the economy and state finances.

While the supplementary budget documents released on Wednesday were only half of the more than 200 pages that are usually published in the main budget review, and lacked key forecasts beyond this year, there was enough to show the troubled state of the country’s economy.

The following charts show some of the numbers Mboweni presented to lawmakers.

While the minister warned last week that the country could slump into a sovereign-debt crisis in four years’ time, he said on Wednesday total debt could stabilise at 87.4% of gross domestic product by 2023-24, if the government takes active steps to manage its finances. Failing that, the debt trajectory will keep rising, topping 140% by the end of the decade.

“In the passive scenario, debt continues to rise, and debt-service costs outstrip spending on social and economic priorities,” the Treasury said in the review. “In the active scenario, government acts rapidly to stabilise debt by reducing spending and enacting economic reforms.” 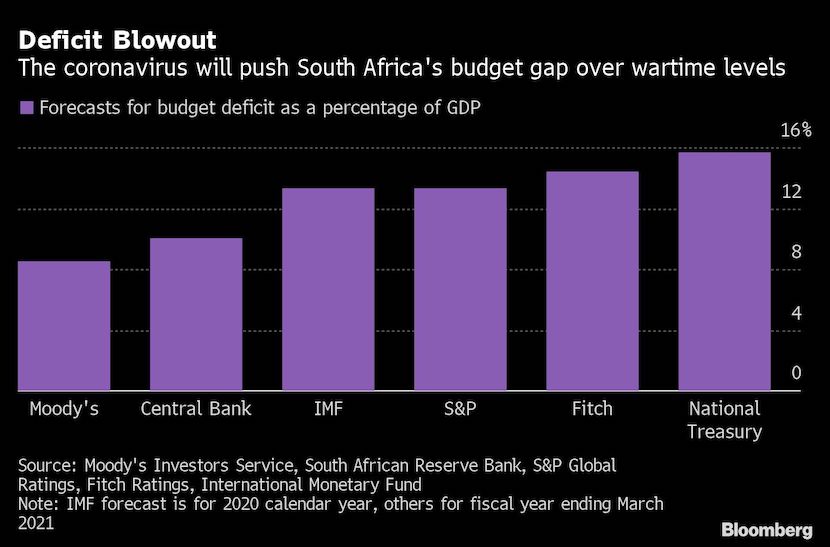 One of the key numbers Mboweni presented was the updated forecast for the consolidated budget deficit. At 15.7% of GDP for 2020-21, the Treasury’s projection is now more than double what is forecast in February and is bigger than most other recent estimates. The document didn’t give the consolidated deficit for 2021-22 and beyond.

The Treasury now projects the economy will contract by 7.2% this year, even worse than during the Great Depression. That will add to inequality and unemployment, which surged to a 17-year high in the first quarter, even before a lockdown that shuttered most businesses and caused massive job losses. The International Monetary Fund is even more pessimistic, cutting its forecast for a contraction to 8% from 5.8% in April. 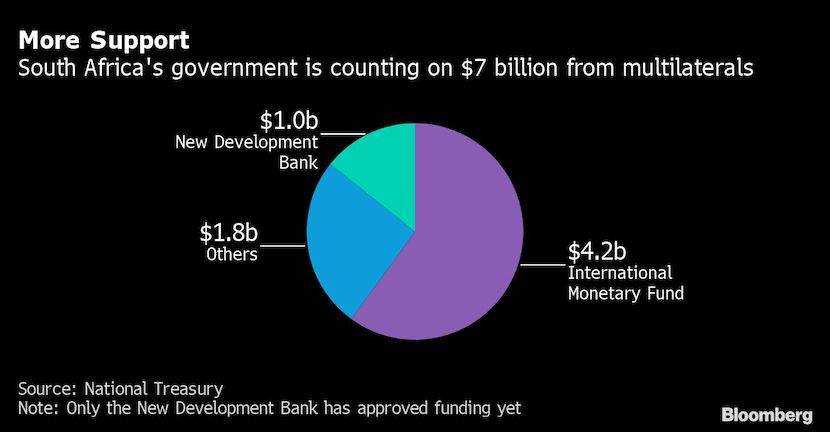 South Africa has softened its opposition to asking for help from institutions such as the IMF and World Bank and will now seek even more from these multi-lateral lenders than the $5 billion the Treasury initially said it would. The government intends to borrow $7 billion from international finance institutions to support the pandemic response, Mboweni said.

That includes $4.2 billion from the IMF. The lender’s staff will make a submission about South Africa’s funding early in July and World Bank support is likely to follow approval of the IMF funding, he said.