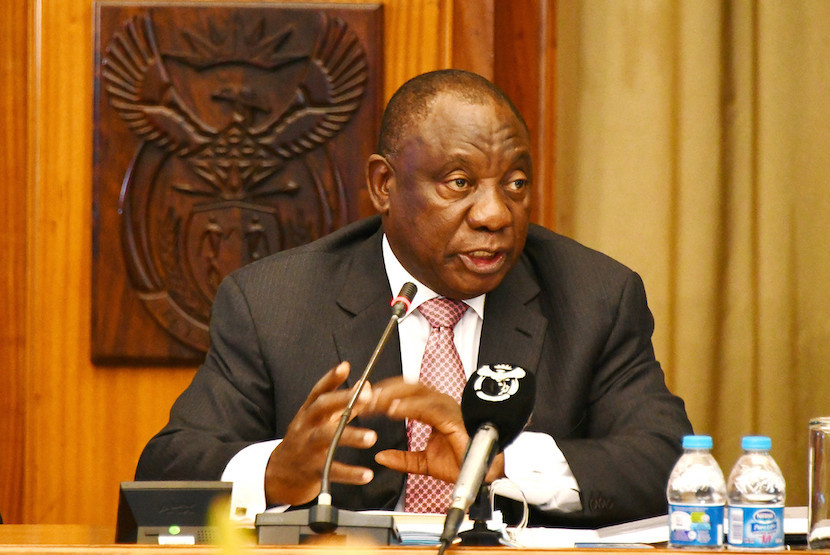 From the desk of President Cyril Ramaphosa:

In many countries around the world, the coronavirus pandemic has required the limitation of many civil liberties and put social cohesion to the test.

But countries with strong institutions, vigilant judicial systems and a robust media have been able to prevent human rights from being undermined and the authority of the state being abused.

It has been six months since the national state of disaster was proclaimed. Despite the unprecedented nature of the disease and the immense challenge of placing a country of 58 million people under lockdown, we have fared well. We have managed to contain the spread of the disease primarily because of the cooperation and vigilance of all citizens.

This is in no small part due to the sterling work of our media.

We owe a debt of gratitude to South Africa’s hardworking and tenacious journalists. They have kept our people informed by disseminating key health messages about social distancing and hygiene. They have done so under extremely trying conditions, often with limited resources.

They have told the stories of the effects of lockdown on the lives of people and their businesses. They have been out in the villages, towns and cities, bringing stories of ordinary people and drawing national attention to problems being experienced in hospitals and clinics, prompting government action.

Our media have also shone a light on excesses that perhaps would not have ordinarily come to light. They have fulfilled their watchdog role by unearthing acts of corruption and maladministration, sparking a massive national debate and leading to a number of high-profile investigations. Through this reporting they have earned people’s trust.

A free press is not an end in itself. It is a means by which democracy is secured and upheld. During this pandemic, our media has played not just its traditional watchdog role, but exercised its civic duty in supporting the national effort to contain the coronavirus.

Given the importance of the media to the health of our democracy, it is a great concern that like all other sectors of the economy, the coronavirus crisis has hit our media houses hard. Some publications lost as much as 60% of their income in the early days of the lockdown. A number of companies have had to implement salary cuts, reduce staff numbers or reduce hours worked. Regrettably, some publications have even been forced to close, among them some of South Africa’s most established and well-known magazine titles.

The job losses that have resulted from the lockdowns have exacerbated a crisis for media companies already facing challenges like loss of advertising revenues, falling circulation and market share being taken by mobile-first news and other technologies. These financial difficulties are being faced across the board, from online titles to traditional broadsheets to the public broadcaster.

This was one of the issues that was raised sharply during my engagement with the South African National Editors’ Forum last week. Instead of lamenting their fate, however, the media industry is working hard to refine business models, to drive innovation and to retain staff as much as possible.

At the same time, the media is a unique entity in any society because its practitioners fulfil a role that is so essential to our democratic order. They work to keep the public informed and to keep power in check.

We need more journalists, not less. That is why the loss of even a single journalist is not just a loss to the industry but to the country.

We need our media veterans, who bring with them vast experience and institutional memory, and are able to offer critical reportage and informed analysis. At the same time we need more young journalists in the profession who are tech-savvy, abreast with new trends in storytelling and in touch with the concerns of a youthful population.

As a society we owe the media our full support. Whether it is electing to pay for content, supporting crowdfunded journalism, paying our SABC license fees or simply buying a newspaper, we can all play our part to support this industry in crisis. As government, despite the gloomy economic climate we will continue to extend advertising spend to publications and broadcasters, especially community media.

The private sector must also continue to support the industry through advertising and working with media houses in the production of innovative content in line with global media trends. Local philanthropic and donor organisations should also come on board and support public interest journalism ventures, as is the case in many democracies.

The proliferation of fake news during the pandemic, primarily on social media platforms, has added to the urgency for more news that is accurate, fair and impartial. During this time our people have relied on our established media houses for information, once again underscoring their importance as pillars of our democracy.

As we begin the great task of rebuilding our economy in the aftermath of the pandemic, the media industry will need our support more than ever. The free press was once described as ‘the unsleeping guardian of every other right that free men and women prize’. As we salute their role in this pandemic, let us do what we can to ensure that the free and diverse media in our country is able to survive and thrive.