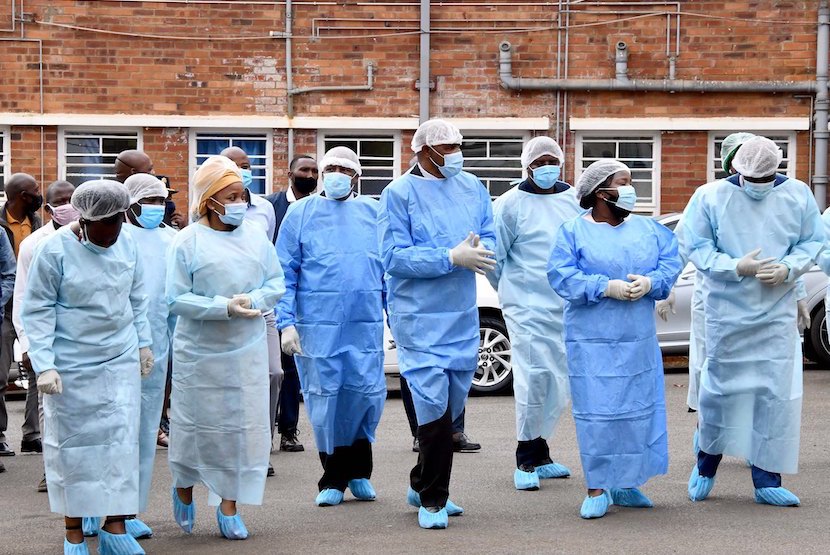 South Africa has large rural population, lack of access to medical care and relatively limited Covid-19 testing. These factors make it difficult for officials to calculate the true number of Covid-19 infections and related deaths. Some argue that it is impossible to ever know exactly how Covid-19 has affected the population. With large numbers of patients suffering from Tuberculosis, HIV and Diabetes some say that deaths may be mistakenly attributed to these illnesses. Alex Van den Heever of the University of the Witwatersrand and Debbie Bradshaw of the South African Medical research council, share their views. – Melani Nathan

(Bloomberg) — South African hospitals likely under-reported the number of patients with Covid-19 and the death toll from the virus is probably much higher than the official figure, according to a study.

As many as 2.8 million people out of a population of 59 million may have had the virus and almost all of the country’s 62,056 excess deaths since the beginning of the year were probably caused by the pathogen, Alex van den Heever, chair of Social Security Systems Administration and Management Studies at Johannesburg’s University of the Witwatersrand, said in a paper this month. His research used data to Oct. 24. By that date, 658,171 infections and 15,907 deaths had been confirmed by the Health Ministry.

Other researchers using different methodology have come up with a lower figure of natural excess deaths, or the number of people who died this year above an historical average. They also attribute some deaths to a lack of access to medical facilities and treatment as South Africa imposed movement restrictions. Van den Heever disagrees. Peaks of new infections closely match spikes in excess death numbers, he said.

“The correlation is just too close for it to be collateral deaths,” he said in an interview Monday. “There is a strong possibility that they are directly linked to Covid-19. To me it would be the most probable conclusion, unless other evidence is brought to bear.”

South Africa has the most confirmed cases on the continent and the highest number of Covid-19 deaths, according to official figures. It has carried out more than 5.1 million tests, many times more than any other country in Africa. Its official death toll, currently at over 20,000, is the world’s 14th highest. Iran, which has a similar number of infections, has a death toll of about 42,000.

“We think that he is overstating the number of excess deaths,” said Debbie Bradshaw, chief specialist scientist at the South African Medical Research Council and a co-author of the council’s weekly excess deaths report. Still, “we concur with his interpretation that the temporal trend across the provinces suggests most of deaths would be Covid related,” she said.

Bradshaw’s report estimates that there have been about 50,000 excess deaths. “No one can say for sure which are due to Covid,” said Lwazi Manzi, spokeswoman for South African Health Minister Zweli Mkhize. “We are trying to collate all the information” to make a more accurate assessment, she said.

A final assessment could take “many years,” according to the SAMRC.