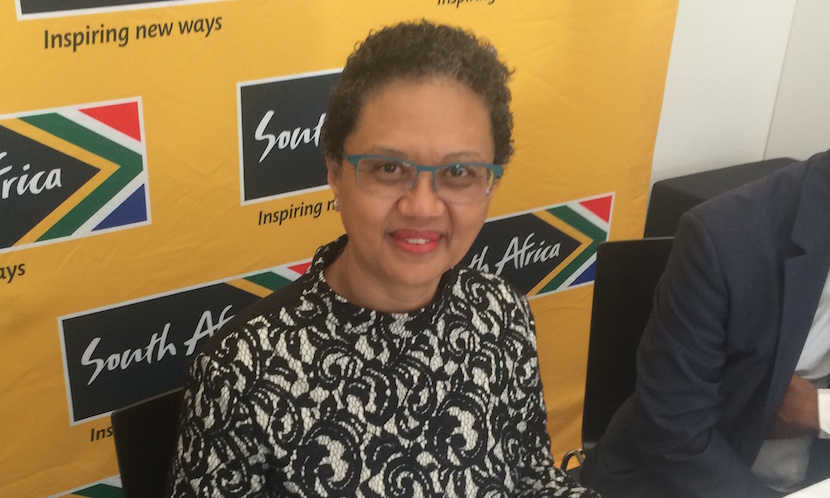 One of the few bright spots in South Africa’s gloomy 2016 Davos came at a sparsely attended Press Conference by Energy Minister Tina Joemat-Pettersson where the reporting corps was myself and someone from Surve’ Media’s wire service. The event started slowly with the volatile Minister reading a lengthy statement about the Renewables Programme, strangely referring to herself in the third person. When allowed, my pointed question was how the nuclear programme could even be on the table after the Rand had halved from a level where the NDP Commissioners were already fretting about cost. Joemat-Pettersson promised the question of affordability would be interrogated by the same team that ran the successful Renewables Plan. In his State of the Nation address this month, President Jacob Zuma followed a similar same line, All well and good. But actions always speak louder than words. And suspicion resurfaced after reading the Fin24 report below where Joemat-Pettersson appears to be back to old tricks which tarnished her reputation while overseeing the allocation of fishing quotas. The best thing in the Budget would be a definitive dumping of the nuclear proposal. It might be asking too much for Finance Minister Pravin Gordhan to kill what is potentially the biggest patronage plunder of all. But we can always hope. – Alec Hogg

Cape Town – A storm that has been brewing over the Department of Energy’s (DoE) nuclear energy programme and PetroSA could erupt at its portfolio committee meeting on Tuesday, after Minister Tina Joemat-Pettersson snubbed the session last week.

“Tomorrow’s (Tuesday) committee meeting will present the minister with a real opportunity to deliver on her promise of transparency and provide the South African public much needed and vital information on South Africa’s proposed nuclear deal,” according to Democratic Alliance MP Gordon Mackay on Monday.

Last week, the committee asked Joemat-Pettersson to explain the implications of President Jacob Zuma’s State of the Nation (Sona) address in which he cautioned that the country would “only procure nuclear on a scale and pace that our country can afford”.

“The minister, who arrived an hour late, dodged addressing the issue by saying she is going to be part of a parliamentary debate on Wednesday and couldn’t pre-empt this in a portfolio committee meeting,” according Liz McDaid, spokesperson for environmentalist group Safcei.

“The chair then promised that the committee would hear what the minister planned to do given Sona and also for her to account for her own parliamentary comments,” she said. “This is all meant to take place on Tuesday 23rd”.

During her Sona debate on February 17, Joemat-Pettersson said the country had to go nuclear because of the water situation in the country.

“We simply have to go the nuclear route,” said Joemat-Pettersson, “because we don’t have enough freshwater. Koeberg recycles 22bn litres of seawater, while Medupi (coal-fired) power station uses 17bn litres of freshwater.”

Gordon, who heads up the DA’s energy portfolio, told Fin24 that the committee has been clear.

“Without these documents any decision to proceed with nuclear must be seen to be irrational,” he said.

McDaid said Parliament has failed to hold Joemat-Pettersson to account. “At one stage, the chair told the public that there would be a discussion on the nuclear deal, but it never happened,” she said. “Then last year, the minister arrived at the meeting with a classified document, which could not be discussed.”

“At the end of last year, during the budget review process, the DoE failed to account for Necsa (SA Nuclear Energy Corporation), which did not report and asked to be exempt from reporting to parliament.”

“Necsa has major liabilities for its failure to address nuclear contamination,” she said. “There is no information on the extent of the contamination, the amount of the liability and the timeline to fix this. Now Necsa is saying that the government must pay and that it is not liable.

“Despite the lack of the accountability, the nuclear train steams ahead.”

In October 2015, Safcei took government to court for failing to put the necessary processes in place to ensure that the nuclear procurement deal is concluded lawfully and meets the requirements of the constitution for a fair, equitable, transparent, competent and cost-effective process.

Energy portfolio committee chairperson Fikile Majola said in his recommendations report for 2014/15, that he wants Tina Joemat-Pettersson to, “without prejudicing the interests of the country in the process, present the key nuclear procurement documentation (including) the Integrated Nuclear Infrastructure Review (including details of the action plans), finance options, models and solutions for the nuclear build programme and economic impact of localisation of the nuclear programme.”

Mackay said the DA is also anxious to hear the minister’s response regarding the portfolio committee’s demand for a full forensic investigation into the R14.5bn loss at PetroSA.

Majola also wants the  minister to reveal “how the financial challenges, especially the shortfall, around the rehabilitation of the PetroSA onshore and offshore liabilities are to be addressed, by end of the financial year” on March 31, 2016.

He also wants her to “initiate a forensic investigation into the reasons for the financial challenges at PetroSA including the R14.5bn impairment. The full findings must presented to the (committee) when completed”.

“This is the biggest for any state-owned enterprise ever, and (the DA looks forward to an update on) developments on PetroSA’s newest turnaround strategy,” Mackay said.

“Should the minister conceded to the committee’s demands, this will mark a real victory for Parliament and a victory for the South African people – who are tired of being used as a piggy for vanity energy projects.”

“Tomorrow’s committee meeting will be the first significant test of President Jacob Zuma’s commitment to transparency and accountability promised in his response to the State of the Nation debate,” he said. – Fin24