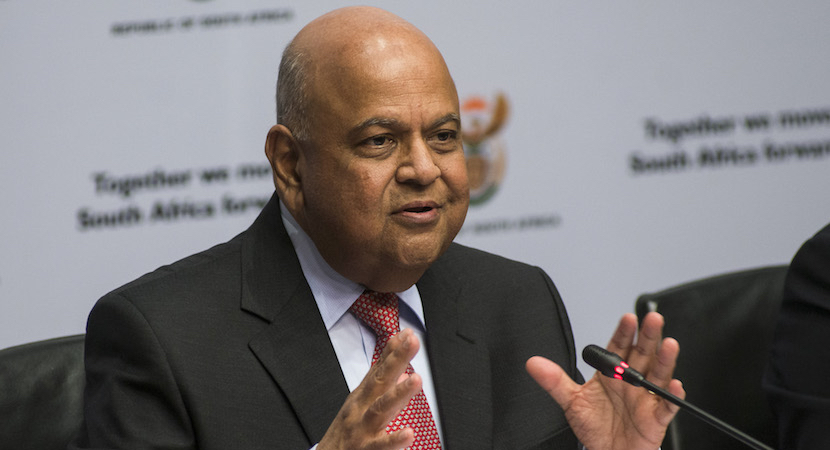 Tax guru Matthew Lester summed it up – a country going nowhere slowly. And him beating on the growth drum is exactly what political analyst Daniel Silke picks up from Finance Minister Pravin Gordhan’s budget. It contained not one element to bolster growth but was more a tale of Robin Hood – tax the wealthy to help the poor. Gordhan did make mention of needing a bigger pie but what’s needed for this to happen is an action plan. Gordhan’s didn’t, and his speech was filled with socialist speak, and we all know how that story ends up in an emerging market – enter Venezuela… Silke says a credible Gordhan ultimately did what he could do, and was stymied by political and policy paralysis. If he’d gone any other route, he may have fast-tracked his own exit. Now all South Africans can do is wait until next time, and hope that then leadership sets the shackles free, because if not South Africa will soon run out of money… – Stuart Lowman

Pravin Gordhan’s 2017 Budget was tough. In fact, it was tough on everyone – sometimes for the right reasons and sometimes for the wrong. In a speech that will be remembered for increases in personal income tax, the subtext of the Minister’s address also contained a message for our political future.

To his credit, his presentation might have been about finding immediate solutions to the glaring budget shortfalls, but he was also warning South Africans about the future.

Firstly, let’s get the bad out of the way. It bears repeating that an annual budget is simply a reflection of the cumulative years of preceding economic performance and associated policy-making.

With a R28bn hole to plug and devoid of any growth-inducing policies over preceding years, Gordhan resorted to the old ‘Robin Hood’ approach. Take from the ‘wealthy’ and get out of the shortfall jail that way.

There is already significant evidence from Economist Mike Schussler to show that South African taxpayers now face amongst the highest burden in the world when it comes to tax revenue raised as a percentage of GDP. Indeed, the tax on individuals as a percentage of total revenue now far outstrips company tax as well as VAT.

Gordhan’s much vaunted new tax bracket for higher tax earners obscures the effect of fiscal drag means that across the board a much large proportion of income tax payers will be paying more. Not to mention the overnight increase in the withholding tax on dividends on which many pensioners and related pension funds rely on as an income source.

Whilst spinning it as a politically-seductive tax on the rich, in reality the tax increases clearly don’t just target the wealthy. It’s the middle class who will suffer.

A personal income tax ‘solution’ to the problem without longer term solutions really does little for a country other than help to balance the books. And it would be so much more palatable if those burdened taxpayers felt they were getting some bang for their buck rather than face almost weekly scandals of wayward officials, corruption and mismanagement particularly in the swamps of the state-owned enterprise sector.

But, when you have little leeway to play with the figures, tax is a fall-back position. And that was the Budget – with hands tied due to the ANC’s inability to develop and implement clear growth-oriented policies to bump up an almost stagnant GDP growth rate, there seemed little other choice.

Aside from the bad news, let’s see if Gordhan was also saying something far more meaningful for the longer term. And it would seem that he was.

Having addressed the immediate and very narrow need to use tax as a last resort, he developed some very significant themes which set him apart, once again, from the lacklustre SONA address from President Zuma a week earlier.

No truer words were ever spoken on the issues of combining transformation with growth. His statement: “Without transformation, growth will reinforce inequality; without growth, transformation will be distorted by patronage.” Clearly fine-tunes and tweaks President Zuma’s more labouring and somewhat polarising discussion on a similar topic.

Gordhan was at pains to talk about the need to encourage growth. And he’s right. Growth grows the pie with a more acceptable route towards redistribution and poverty alleviation. Without growth, pressurising the middle-classes further as a result of a small tax-base alienates, frustrates and is ultimately a drag on the economy.

The message was clear. South Africa needs growth oriented policies to work alongside a more equitable society in all its forms. It was a message to his own ANC. If the pie is too small, it will degenerate into a battle of factions for any piece of it. And the broader society will find itself starved out of the better life that we all desire.

Furthermore, Gordhan’s emphasis on the perils of rising debt levels was a warning shot to his fellow ministers and to any potential successor. Debt to GDP remains at about 50% having spiked hugely under the Zuma Presidency. It is now a monumental effort to cut state expenditure after the large payroll increase in headcount and above-inflation salaries experienced over the last decade.

Gordhan has already received substantial political uphill from his cabinet colleagues who are fighting for bigger allocations to their department. And, for the ANC faction fighting to get their hands on treasury for more nefarious rent-seeking reasons, Gordhan’s stark warnings should’ve been enough to instil substantial fear into an ANC who have to understand that this is simply not an option into the future.

The R2.2 trillion debt bill – whilst not out of kilter with other global examples – still necessitates massive shortfall-raising efforts over the next few years.

With no stimulatory policy, the payback from South Africans in future can only add to the burden – including potential raises in VAT and other direct and indirect taxes – even on fuel. Plugging a hole in the shortfall dyke but not alleviating the water pressure will only be a temporary fix before disaster strikes.

When you have to pay R160 billion plus this year alone in interest on debt, you better make sure that our capital borrowing costs don’t rise as a result of a ratings agency downgrade.

With a cabinet reshuffle long overdue and political pressure by internal ANC factions keen to see the end of Gordhan, this was a budget in which Gordhan carved out a legacy of fiscal stability – a legacy that any successor will need to emulate.

Furthermore, the absence of any mention or commitment to the capital-intensive nuclear build program again reinforced Gordhan’s disdain for profligacy although even he had to cough up more for that bottomless pit called South African Airways.

Finally, Gordhan once again provided a degree of leadership often absent from his parent political home. His pleas for a unity of purpose in taking the economy forward reinforced his sincere messages in his many years as Finance Minister. He spoke with an air of dignity and credibility – two political assets in short supply in the South Africa on 2017. He again delivered an address much more befitting an elevated office like that of the SONA.

Still, Gordhan could not transcend the broader political dynamics at play. He had little to work with. His party is in disarray and lacking ideological cohesion to present growth-oriented policies. He played it safe on redistribution and sought a relatively easy-way out by raising taxes.

In what might be his last Budget, Gordhan – along with his party – could ultimately not walk that extra mile in providing some type of sustainable programme for growth. There was little – if anything on offer that would alleviate the threat of rising debt levels, would radically reduce unemployment, make us globally competitive and transform South Africa into a magnet for both domestic and foreign investment.

South Africa, therefore, will need to wait a lot longer until the ANC either elects new pragmatic leadership, or its own internal dynamics – along with a broader political realignment – plays into a meaningful rescue package for the 55 million inhabitants of this beautiful but troubled land.