JOHANNESBURG — Finance Minister Malusi Gigaba on Wednesday delivered his maiden budget speech. Unfortunately, the market reaction was sharply negative as the rand briefly went into freefall and bond yields rose. Minister ‘Gigabyte’s’ speech was light on substance and lacked a plan on what South Africa will do to get itself out of the mess it’s currently in. His realistic assessment of the economy’s widening fiscal deficit and growing dependence on debt has also sent investors running for the exit. As analysts point out below, the possibility of another credit downgrade has just increased dramatically. – Gareth van Zyl

Today’s Medium Term Budget Policy Statement (MTBPS), presented in Parliament by Finance Minister Malusi Gigaba, paints a bleak picture: the expenditure ceiling has been breached, there is no primary surplus and debt and guarantees combined are above 60% of GDP.  Not only is the market likely to hate it, but Standard & Poor’s may well downgrade our domestic credit rating in November. 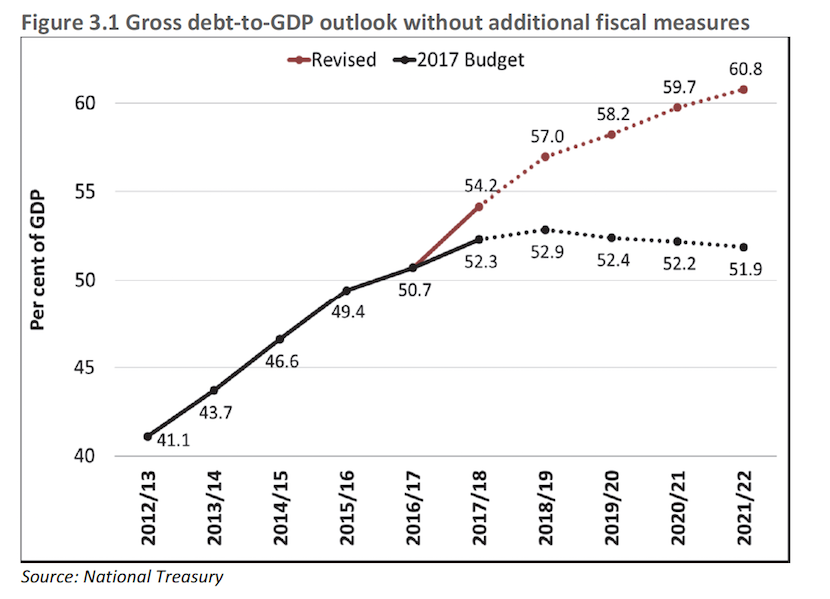 This MTBPS is a clear acknowledgement of National Treasury’s limitations and starkly lays out the likely path if no dramatic action is taken to address public sector wages, governance at state-owned entities and economic growth in the next six months.

The market and rating agencies will hate:

S&P have cited two key drivers to their SA rating. Firstly, they need to see fiscal consolidation over the medium term. Unfortunately this MTBPS produces no evidence of this, as debt to GDP continues to rise over the medium-term.  Secondly, they want comfort that state-owned enterprises do not present a major risk to the sovereign balance sheet.  While the increase in the expenditure ceiling caused by the SAA bail-out could be repaired by the sale of some Telkom shares, decisive action is needed by the Minister of Communications.

Moody’s also cited two key drivers to their SA rating: Firstly, adherence to the expenditure ceiling, which has now been breached and the need to see a growth plan. Hopefully, today’s MTBPS will spur some much-needed action in the area. 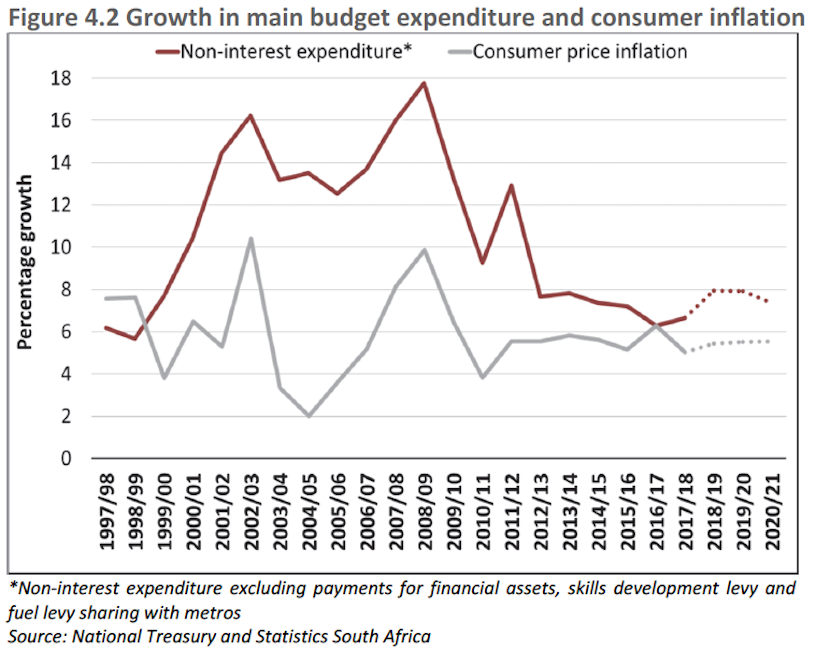 Read together, the Medium-Term Budget Policy Statement and Minister Gigaba’s Budget Speech starkly lay out the choices South Africa faces.  Without hard political decisions, South Africa’s gross-debt-to-GDP breaches 60% in four years. Net debt-to-GDP will breach 55% in three years. Add in guarantees to net debt, and the total is over 60% in two years.

Previously the National Treasury attempted to lead the rest of government by pre-announcing measures that they believed were important to enable fiscal consolidation and higher growth. In contrast, this MTBPS acknowledges that Treasury is powerless to make the hard decisions that are required. These decisions need to be made by the broader cabinet. It is a high risk strategy that markets and the rating agencies could dislike intensely. However, it is a fair reflection of the current political environment.

There are essentially three critical areas that need to be addressed to stabilise the budget. Firstly, public sector wages need to be controlled. The two problems relating to public sector wages are the persistently high above-inflation wage increases and the dramatic growth in senior management positions, particularly amongst teachers, nurses and police.

Secondly, governance at state-owned enterprises needs to improve quickly to help stabilise the finances at these entities. After years of mismanagement, several state owned companies are facing liquidity and/or solvency issues. The most notable is Eskom, which has utilised R250bn in government guarantees and has another R100bn unutilised. Until the governance of state owned companies is resolved, the problems of corruption, instability of management and opaque targets will continue.

Finally, boost South Africa’s growth rate. The divergence between the performance of the global economy and the local economy over the last two years is entirely due to South Africa’s dysfunctional political environment.  The speech states that “Demonstrative actions that build business and consumer confidence can encourage global and domestic investment, broaden private-sector activity and boost competitiveness.”  This is exactly what is needed to encourage businesses to invest and consumers to spend.  In contrast, there have been many recent actions by cabinet ministers that exacerbate the lack of confidence, including a mining charter that stunts future investment, the touting of an unaffordable nuclear plan and little demonstrable commitment to resolving governance at Eskom.

If South Africa’s growth rate averaged 2.5% in 2018 and 2019 and 3% thereafter, net debt to GDP plus guarantees would stabilise at just below 60% of GDP.  On the other end of the scale, if growth were to contract by 2% in 2018 – an entirely plausible outcome if the ANC electoral conference produces a negative outcome – the debt ratios would breach 60% next year.

Meanwhile, the Institute of Race Relations (IRR’s) Frans Cronje had this to say about today’s mid-term budget:

What stands out from the minister’s remarks is the ideological confusion. The minister says the right things regarding growth and its importance. But there is no sign that the government is prepared to introduce the reforms (secure property rights and the primacy of a private sector led market economy) to attract the investment to secure higher levels of growth. That the minister forecasts economic growth rates to remain below 2% even as global economic conditions improve is to confirm that real structural reform is not on the agenda. Too often the minister mixes up the importance of attracting investment with the priority of using interventionist policy to redistribute the proceeds. Investment led growth is in and of itself empowering and does not require much by way of further interventionist policy in order that its benefits reach ordinary people. Quite the contrary is true and too often interventionist policy serves to undermine investment which in turn serves to stunt socio-economic progress. Nor is it necessary to introduce much by way of investment incentives – far more important is repealing counter productive policy. In fact government incentives often have the effect of skewing market forces and introducing unintended consequences. Nor are austerity measures the right response to what is essentially a low growth problem. Until the ideological confusion, now apparent at the heart of treasury thinking, is resolved investment levels will continue to disappoint. The budget deficit and government debt level targets must, in that case, be expected to come under pressure as renevue collection undershoots and popular and political pressure on the government escalates. Without real structural reform the government will find itself in an ever deepening negative economic and political spiral.

(Bloomberg) — South Africa forecast higher debt and wider fiscal deficits over the next three years, heightening the risk of further credit ratings downgrades as a fight for control of the ruling party limits policy choices. The nation’s currency and bonds weakened.

Finance Minister Malusi Gigaba painted a bleak picture of the state of the country’s finances in his first mid-term budget on Wednesday, with growth and revenue set to fall well short of projections made in February. He warned there was little scope to raise taxes or cut spending.

“It is not in the public interest, nor is it in the interests of government, to sugarcoat the state of our economy and the challenges we are facing,” Gigaba said in a written copy of a speech to lawmakers in Cape Town. “Improving our economic growth outlook over the period ahead remains our biggest challenge.”

If the ratings companies “don’t do anything after today they are frozen behind the wheel,” George Herman, chief investment officer at Citadel Investment Services in Cape Town, said by phone. “The ratings downgrade is now all but guaranteed, it’s just a matter of them saving face and deciding when to do it.”

The rand weakened 1 percent to 13.8875 against the dollar as of 3:25 p.m. in Johannesburg, after earlier slumping to the lowest value this year. The yield on benchmark government bonds due December 2026 jumped 21 basis points to 9.07 percent.

Efforts to put Africa’s most-industrialized economy back on track have been hamstrung as leaders of the ruling African National Congress wrangle over who will replace President Jacob Zuma as party leader in December. Zuma’s implication in a succession of scandals, including allegations that he allowed members of the wealthy Gupta family, who are in business with his son, to loot billions of rand from state companies have further dented investor confidence. Zuma and the Guptas deny wrongdoing. 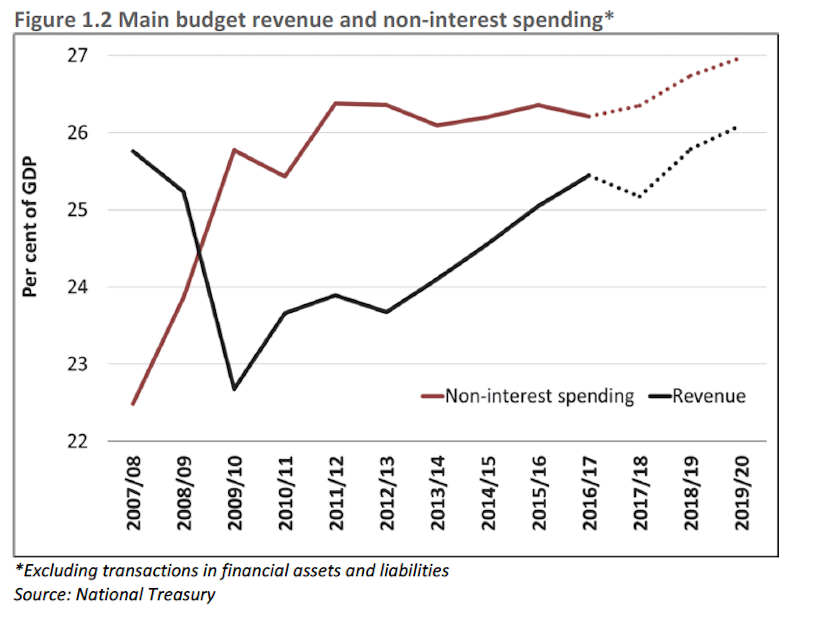 The Treasury expects the economy to expand 0.7 percent this year, down from 1.3 percent predicted in the February budget, and trimmed its growth forecasts for the next three years. Tax revenue for this fiscal year will fall 50.8 billion rand ($3.7 billion) short of the initial forecast.

Lower growth and revenue will feed through to a higher budget deficit. The gap is expected to jump to 4.3 percent of gross domestic product in the current fiscal year, up from a projected 3.1 percent.

The shortfall will probably stay at 3.9 percent of GDP for the next three years. That’s a break from the Treasury’s past pledges to steadily narrow the deficit.

Gross government debt is projected to mount to about 60 percent of GDP by 2021.

“Government is acutely aware of the dangers of unchecked debt accumulation,” Gigaba said. “Debt-service costs are the fastest-growing category of expenditure, crowding out social and economic spending. Our resolve is to remain on course and not to deviate from the fiscal consolidation agenda we embarked on a few years ago.”

Any new spending priorities will have to be redirected from other projects, he said.

The government intends dipping into its contingency reserves and selling part of its stake in telecommunications company Telkom Ltd. to help plug the budget gap and avoid a breach of its expenditure ceiling. Other steps to curb spending and bolster revenue will be announced in next year’s budget.

Meanwhile, a team of cabinet ministers reporting to the president has been set up to find ways to stabilize debt, narrow the deficit, stimulate growth and build investor confidence over the next few years. Measures under consideration include further asset sales and reducing state companies’ reliance on government debt guarantees.

“Hard choices are required to return the public finances to a sustainable position,” the Treasury said. “Unless decisive action is taken to chart a new course, the country could remain caught in a cycle of weak growth, mounting government debt, shrinking budgets and rising unemployment.”

(Bloomberg) — The rand slid to the lowest in more than six months after South Africa forecast wider fiscal deficits over the next three years.

The currency fell for a fourth day against the dollar as Finance Minister Malusi Gigaba painted a bleak picture of the state of the country’s finances in his first mid-term budget on Wednesday, with growth and revenue set to fall well short of projections made in February. Yields on the nation’s bonds rose as the projections raised the risk of further credit-rating downgrades, with the nation’s debt already rated junk by S&P Global Ratings and Fitch Ratings Ltd.

The mid-term budget comes a week after President Jacob Zuma rattled markets by shaking up the cabinet for the second time in seven months. Slow economic growth is hampering the state’s ability to meet its revenue targets, and any further rating downgrade could spur capital outflows out of the nation.

“Although it is of some small comfort that the Treasury brought realism into its projections, the fact remains that the country faces alarming consequences in growth, fiscal performance, and financial market stability stemming from possible credit rating downgrades,” said Phoenix Kalen, an emerging-market strategist at Societe Generale in London. “Although there may be a slight bounce after today’s sizeable slide, the bias on the rand is for further weakness in the lead-up to the December ANC conference.”