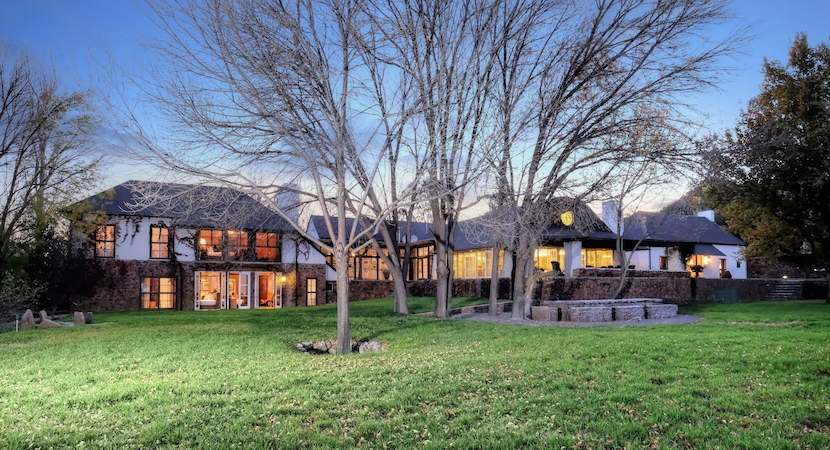 Gary Player, South Africa’s top golfer, has provided a glimpse of his private life by releasing details of his Karoo home that he has put up for sale. The house, stud farm and golf course are on offer for R50m (£2,8m; $3,5m) plus VAT. For South Africans that’s quite a lot of money, but if you are buying in UK pounds, sterling or another hard currency, the farm looks like a bargain compared to what you might get for your cash elsewhere. The property is also unique. Although South Africa’s residential property market is under pressure, Player’s Colesberg real estate is likely to be of great interest – in part because of its rustic charm and also because of its provenance. There’s nothing over-the-top or showy about this house; it feels warm, inviting and authentically South African. However, although agent Chas Everitt International promotes the property as Gary Player’s home, the golfer has more than one. Last year, he put up his Greenville, US home on the market for US$6,6m, according to Golf Digest, with the agents punting it as his personal residence. A spokesman for the 81-year-old golfing legend and horse breeder said that, although Player is selling Rietfontein, he is not giving up on his horse-racing interests in South Africa. Gary Player is looking at keeping his focus in Plettenberg Bay where he has other properties, the Gary Player Stud spokesman told Sporting Post. – Jackie Cameron

Rietfontein, the magnificent Karoo stud farm that has been home to sporting legend Gary Player and his family for the past 44 years, has just been listed for sale by Chas Everitt International, the South African affiliate of Luxury Portfolio International, at a price of R50m plus VAT.

Champion racehorses have been bred and raised on this farm since 1883 and it boasts exceptionally pure water and about 120ha of irrigated mixed pasture rich in the trace elements and calcium required to nurture strong-boned and resilient equine athletes. The extremes of the local climate are also conducive to racehorse breeding, with freezing winters to kill off parasites and hot summers to promote proper growth.

Mr Player acquired the stud in 1974 and thanks to his personal commitment to its development and renowned dedication to the principles of excellence, it has since produced over 2000 top thoroughbreds and achieved worldwide acclaim for the exceptional quality of its breeding stock.

Located on the Oorlogspoort River just outside Colesberg, the farm is an also an oasis of serenity far from city lights, noise and pollution – and indeed is often described by the much-travelled Mr Player himself as a place of true bliss or “Heaven on Earth”. So it is no wonder that he and his wife Vivienne decided after completing the grand main residence here in 2006 that they would make it their permanent home and a favourite holiday destination for their six children and 22 grandchildren.

Vaulted ceilings and generously proportioned, airy living rooms and bedrooms reduce the effects of the semi-desert summer heat, and much of the house opens out to the garden or to a large terrace with lovely views of the surrounding hills. The large formal dining room flows off the cool entrance courtyard with its oversized skylight and large Koi pond.

The residence also features a basement wine cellar; an ultra-modern kitchen with Larchwood cupboards, separate pantry, walk-in cold room and breakfast area; an upstairs library/reading room; a private study with its own lounge area and a luxurious gym. It is air-conditioned throughout.

There is a long lap pool outdoors as well as a trampoline, tennis court, enclosed hillside barbeque area with a hot-tub and various garages, storerooms and seating areas. The enclosed vegetable garden, orchard and herb gardens are all irrigated, and the property also boasts a private chapel, a hothouse, two guest flats and a three-bedroom, two-bathroom guesthouse with its own pool and entertainment area.

And, of course, it has a golf course, as befits the man who is not only rated the most successful international golfer of all time, with 165 tournament wins to his name, but also acclaimed as the architect of more than 325 golf courses on five continents. Nine holes of his eco-friendly “home course” were designed by Mr Player. The fifth hole, Cactus Jack, was opened by Jack Nicklaus, who is one of the many celebrities to have visited Rietfontein regularly over the years.

In the business section of the farm there are 46 stables, eight of them in a special foaling barn, 14 staff houses; tack, equipment and feed storage sheds; two offices and a veterinary treatment room.

Grazing and exercise areas include 14 post-and-rail paddocks, several fenced camps and an enclosed oval race-track of about 3000m. The farm also has its own fenced game reserve, and equipment on the property includes tractors, trucks, balers, windmills, water pumps, reservoirs and water tanks.

“We are honoured to have been awarded the mandate to market this property,” says Rory O’Hagan, CEO of the Chas Everitt International Luxury Portfolio division. “In addition to being an exceptional ranch of very rare quality, it has the added cachet of being the private home of Gary Player, who is known and respected all over the world now not only for his golfing achievements but also for his untiring work on behalf of underprivileged children. We thus have no doubt that South African and international investors will be clamouring to make it their own.”