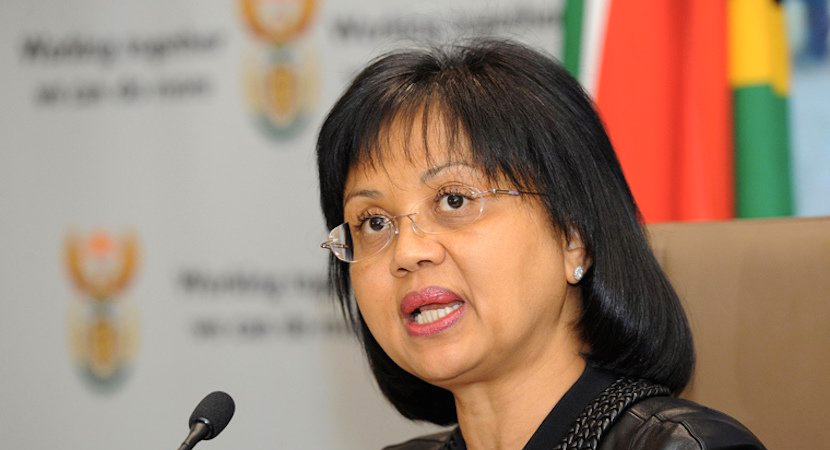 While you should take anything a politician says with a pinch of salt, especially a shadow minister, the DA’s Gordon Mackay assertions that Zuma-ousted Minister of Energy, Tina Joemat-Pettersson’s legacy will counter Zuptoid nuclear ambitions is quite convincing. His claim, hugely reassuring to anti-Nuke and anti-State-Capture activists, is that the administrative and technical framework she has left behind will force the nuclear acquisition bandits to go via alternative energy solutions in a very handy time-consuming exercise. Joemat-Pettersson’s successful Renewable Energy Independent Power Producers Programme brought nearly R200bn worth of investment to SA in 2014. But far more influentially, her Integrated Resource Plan (IRP), shocked Eskom and state-owned nuclear firm Necsa in November, dramatically altering the course of the nuclear need and delaying its roll-out and scale by decades. This will all take some untangling, so her successor, Mmamoloko Kubayi, and new finance minister Malusi Gigaba have their work cut out. It looks like a straight race against time as cheaper forms of renewable energy come on line while Russia, the Zuptoids reported nuclear-deal masters, champ at the bit. Be interesting to see what injuries this new Zupta cabinet pair are prepared to endure when they’re told they’re not jumping high enough. Keep a look-out for the next episode; it’s coming sooner than you think, to a Zuptoid silver screen near you. – Chris Bateman

That is according to Democratic Alliance MP and shadow energy minister Gordon Mackay, who was speaking in a recent studio interview with Fin24.

Mackay said the Cabinet reshuffle was all “about facilitating and accelerating the nuclear deal”, with the appointment of Malusi Gigaba as finance minister and Mmamoloko Kubayi as energy minister central to this. “(Their) sole mandate is ‘get this thing through and get it through quickly’,” said Mackay.

Mackay said some people assume that because Standard & Poor’s and Fitch downgraded South Africa to non-investment grade, nuclear is off the table. “That is incorrect,” he said. “We need to be very worried for the potential for corruption here. Our role is to stop this thing dead.”

Mackay said Joemat-Pettersson, who resigned as a Member of Parliament shortly after being fired, did not push nuclear despite what people thought.

“There has been this huge misconception that Ms Joemat-Pettersson was Zuma’s woman driving nuclear,” he said. “It actually became clear early on that she was not actually pushing the nuclear agenda.

“In actual fact, if anything, I think she pushed the renewables agenda. Part of the reason she pushed that so hard was very much to build new capacity into the electricity market from renewables so that the case for nuclear would be less and less. So we wouldn’t need nuclear because we have other cheaper forms of energy coming online.”

She almost won her battle with Eskom, which had delayed signing the controversial power purchase agreements that would have unlocked a further R57bn worth of investment. Days after her removal, Kubayi delayed a signing that was meant to have taken place last week.

While pushing for renewable energy, it appears Joemat-Pettersson had also put in place hurdles that could make it easier for opponents to block the nuclear procurement deal, which has been steeped in allegations of corruption.

While the request for information was released in December for nuclear, the more important request for proposals has yet to be released, as this requires sign-off from Treasury.

With both the Treasury and Energy department getting new appointments who could be more sympathetic to nuclear, Mackay believes Joemat-Pettersson created technical hurdles that will survive beyond her term.

“When she was reshuffled, the minister had quite successfully tied government into a series of very specific knots around how quickly it can procure nuclear,” said Mackay.

He pointed to Joemat-Pettersson’s draft Integrated Resource Plan (IRP), which shocked Eskom and state-owned nuclear firm Necsa when it was unveiled in November. It dramatically altered the course of the need for nuclear, delaying the roll-out and scale of nuclear by decades.

Mackay believes Joemat-Pettersson’s next move was her updated ministerial determination, which was surprisingly revealed during the nuclear court case in Cape Town between her department and two environmental bodies.

The updated determination revealed that nuclear energy can only be connected to the grid, dependent on the IRP “or as updated”.

“The updated IRP says we don’t need nuclear until 2035,” said Mackay, adding she was basically saying: “South Africa at some point will procure nuclear, but that there is no rush and no hurry that it has to be done now.

“She has created a framework against which nuclear has been bogged down in terms of its potential procurement,” said Mackay.

“From a political perspective, she’s created a legal framework against which to test the rationality of any future decision for nuclear.

“Eskom can only procure on the basis of energy policy and, so essentially, any decision to procure nuclear that doesn’t reflect the IRP in some way, shape or form will be subject to the test in the court.”

The IRP should be finalised by August or September after public comments closed on March 31. The previous IRP update, which also called for a reduction of nuclear, was never ratified by Cabinet, and there are fears the same could happen with this update.

However, Mackay believes the draft format is good enough to be used in court.

“The Constitutional Court has determined that for a decision of government to be valid, it has to be perceived as rational. So we are going to question that very much.”

Both ministers have called for calm around nuclear, repeating the often-stated phrase: “Nuclear will be procured at a pace and scale that the country can afford.”

On her appointment, Kubayi said that “South Africa has overcome a lot of obstacles and challenges, and will continue to overcome any other challenges coming our way”.

Mackay said the DA will be working with civil society and Parliament to tackle nuclear energy.

“We will be insisting that all procurement documents for this deal have to be approved through Parliament,” he said. “It is going to be difficult, but that will be our first strategy.

“Our second strategy is we are very committed to a legal battle on this. We are already looking at ways that we can interdict this thing.

“The new (energy) minister can expect a rough ride from us.” – Fin24