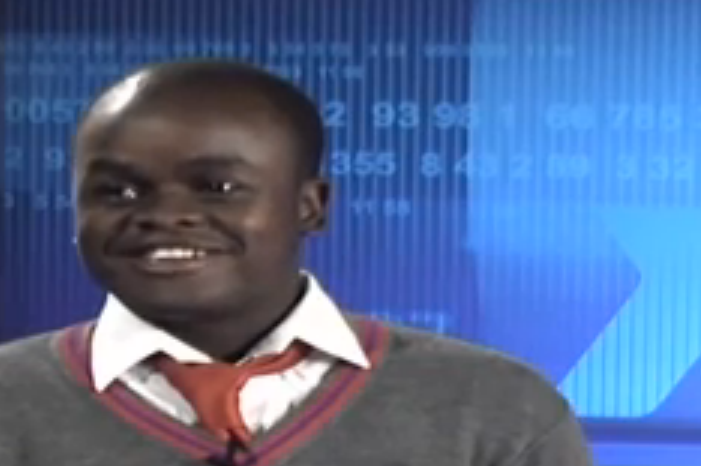 Neftaly Malatjie was just 14 when his entrepreneurial flair kicked in. That was eight years ago when the teenager launched Diepsloot Youth Projects after cadging and fixing a bunch retreaded hand-me-down PCs. It’s  an initiative that has since grown to impact and enrich the lives of over 3 000 young people in one of the poorest communities in South Africa, providing a springboard into the formal job market for many of them. With unsung heroes like Neftaly choosing entrepreneurship over entitlement, SA’s future was never better. – GK

ALEC HOGG: June 16th (that was yesterday), was Youth Day here in South Africa and today, we celebrate youth across all of our programs on CNBC Africa. It’s said that youth can drive economic growth through entrepreneurship. Well, the Diepsloot Youth Projects focuses on income-generating programs to enable youth to engage in business opportunities. The Director of these projects, Neftaly Malatjie, joins us here in the studio. Neftaly, thanks for coming through. You’re an entrepreneur yourself.

ALEC HOGG: I was reading in the background that you started your first business at 14. What was it?

NEFTALY MALATJIE: It’s the Diepsloot Youth Project, which is where…

ALEC HOGG: Did you start that when you were 14 years old?

NEFTALY MALATJIE: Yes, I started that project. It was actually not a business. It wasn’t a project. It wasn’t an organisation. It was just a group of young people playing in the afternoons. I was capacitated by mentors and coaches…

ALEC HOGG: So you were going to school, and then in afternoons, instead of playing soccer you started.

NEFTALY MALATJIE: Yes, I’d be sitting at my PC trying to check where I’d get my next partner to fund me on this program. I’d also be doing more research, but I did have more time to play when I was very young.

ALEC HOGG: That’s incredible. How did you put the money together to get a PC to engage with others?

NEFTALY MALATJIE: I remember I was a part of this other organisation. I used to go there to print. On a particular day, they said ‘Neftaly, why don’t you go and ask for old PC’s from the government or companies? Then you can use them’. I followed their advice. I went to the government. I remember they gave me nine computer boxes. Actually, there were 20 of them, of which only nine were working. I had to take the other PC’s and fix them. From there…that’s how the Diepsloot Youth Project came into existence. After fixing those PC’s, I decided ‘let me start the training program with the computers’. The training program was established through those old, unwanted computers that were stored in the storeroom.

ALEC HOGG: How many kids (or your friends) did you get involved in this?

NEFTALY MALATJIE: When we started, there were 16 and they all left me because there was no money. Things were really tough then. Now, I’m actually changing the lives of more than 3000 young people.

NEFTALY MALATJIE: Yes. They are coming into our programs. We have an afternoon care program for young people who are getting into the centre use the Internet. We are trying to encourage them to no longer go to the libraries, but use the Internet for their research and homework. In addition, they’re coming into our afternoon care program, where they do drama, theatre, and dances. That program is close to my heart. In addition, we have computer training. Each year, we train more than 150, and we have the cashier and waiter etcetera life skills program that we provide.

ALEC HOGG: So what do they learn on the computer program? How proficient are they then to go into business?

NEFTALY MALATJIE: Because of where we’re operating from, it’s townships, so you’ll find many people will become receptionists. They’ll become assistants, cashiers, waiters, and call centre agents, so they usually do these types of jobs. Hospitality, wholesale, and the retail side is where they usually enrol.

ALEC HOGG: And your strike rate? How many of the guys that you train, actually do get jobs?

NEFTALY MALATJIE: When I checked last year on people who have gone on to their computer training, there were 290, of which 93 got jobs. Because our systems weren’t good, we didn’t have systems to monitor some of the beneficiaries, so they would get jobs and we could not trace. You know how they are. However, we have done more than that number.

NEFTALY MALATJIE: There is a boy. His name is Gcina. I think I saw him. He used to wear shoes where you could see his leg underneath. He used to wear dirty clothes, but when I saw him I saw another vision of me. He attended the same grade five times in primary school. My little sister is in the tenth grade now and he’s still in the fifth grade. I saw that he had family problems. School was no longer working for him. I asked him to drop out and then we put him onto the carpentry training. After the carpentry, we put him onto the computer. From the computer, he went for business training. He’s currently running the [unclear 0:04:55.2] and he’s onto production as well as sales. He’s the one managing that and he is 17 years old.

ALEC HOGG: This is extraordinary. Neftaly, somehow you’ve managed to find a way to unleash human potential. Gcina, whom you spoke about a moment ago: he would have had, I suppose, little help/little chance in the future. How are you seeing the work that you’re doing as maybe changing the career choice from crime or from becoming a politician, to actually…

ALEC HOGG: Relying on the government?

NEFTALY MALATJIE: With the programs that we have, especially life skills, it’s realised that many young people are so stereotyped; they believe that everything has to be given to them. After young people have participated in our programs, they realise that ‘I need to do something’. What people used to say, for example ‘when I grow up, I want to be a doctor’ or ‘I want to be a teacher’, starts to come back. Now we also look at the reality part of it and say ‘look here. You have matric and you do not have physical science as your subject. Do you really think it’s smart for you to become a doctor? That is not something that you can do’, but with the programs we have on offer, we manage to make them see that. If I may, I’ll also give you an example of people preparing for a job interview. When they get to us and we ask ‘what job are you looking for’, they’ll tell you ‘I’m looking for any job that exists’. After participating in our programs, they will tell you ‘I saw you have advertised for this certain position. That’s the position I’m applying for’. When you also asked ‘what are your qualities’, people would tell you ‘this is what I have’, unlike when they have to tell you ‘I have three kids that are with my mother in another province here in South Africa. I need anything that can keep me out of the poverty I’m in’. We’re therefore also preventing them from becoming people who always complain, to people that now say ‘I need to take responsibility of my life as well as over my future’.

ALEC HOGG: That’s awesome. Are you finding that the word is spreading? For instance, somebody who would have come with that ‘entitlement’ approach that you mentioned a moment ago, that if he gets it right, he has an impact on others?

NEFTALY MALATJIE: Yes, in our centre, we only have two sides. One is facing one side and the other is facing the other side. Currently, with our computer training we have 51 students who have been referred by other people. In addition, in our job centre people are coming to apply. They would tell them ‘I’ve applied for a job at Diepsloot Youth Project. They managed to help me get a job, so go and apply there’. Now, we’re finding ourselves in a situation where our glasses are full and we have to register for the next intake, because these people were referred by their friends, colleagues, and some by their own parents.