While starting a business is never easy, gender is one additional obstacle that women entrepreneurs face when trying to succeed in the business world, which can still be something of an “old boys’ club.” Add to that the additional hurdle of being a female immigrant entrepreneur, and the challenges are that much bigger.

The truth is, many Americans have a hard enough time making their dreams come true in this country, but these three women came from across the world to turn their aspirations into reality. No matter what boundaries or obstacles they came across, they overcame the odds and made a life for themselves in a country that was once foreign to them. 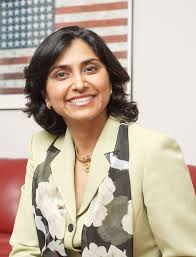 Sheela Murthy is a lawyer and entrepreneur. She was born in Baroda, India, and is the founder and president of Murthy Law Firm, which she founded in 1994.

When she younger, Murthy’s father did not want her to become a lawyer. In 1985, she graduated at the top of her class from Stella Maris College. While on a trip to New York for a court competition, she took a chance and applied for her LLMat Harvard Law School. She returned to India and awaited a response, only to find out that she had been accepted.

While attending school, Murthy had to work nights as a security guard to pay for her living expenses, working 12- to 14-hour days until she was able to open her own firm. In 2009, she was awarded “Entrepreneur of the Year” by Ernst & Young and today her firm is one of the country’s leading immigration law firms.

Yolanda Voss came from Ecuador to the United States in 1962 with the hopes of becoming a fashion designer. She came to the U.S. after obtaining her Fashion Certificate from the Institute of Quito Luz de América. After she arrived, she attended the Pier El Riff Institute to specialize in haute couture. She also enrolled in the Maryland Institute College of Art, where she began establishing apprenticeships with people she considered to be role models. She caught her first big break when Betty Ford, the former first lady, wore one of her designs.

Voss tries to give back to the community. During the startup phase of her first business, she taught other young adults what she knew about the business out of the basement of her home. She is now president of her own fashion-design studio and showroom in Columbia, Maryland.

Rubina Chaudhary was born in India and came to the United States in 1987 with her husband and three children. Her first business was actually started on a dare.

She originally started running training seminars on business skills after earning her MBA. During this time, one of her clients dared her to start her own firm. She took the client up on that dare and entered the field of engineering consulting, a very male-dominated field.

With her initial dreams of wanting to earn more money for her children’s future, she opened MARRS Services. Today, her business has a full-time staff, 35 percent of whom are female. Her husband is her business partner and their firm earns about $6.5 million annually.

Regardless of where you’re originally from or what your dreams are, running a business is hard work. Whether you’re male or female, young or old, believing in yourself and your abilities is the first step to launching a successful business.

Tabitha Jean Naylor is the publisher of SuccessfulStartup101.com and owner of TabithaNaylor.com.  Her intimate knowledge of how sales and marketing go hand-in-hand has resulted in a variety of successful campaigns for start-ups through NASDAQ traded companies.