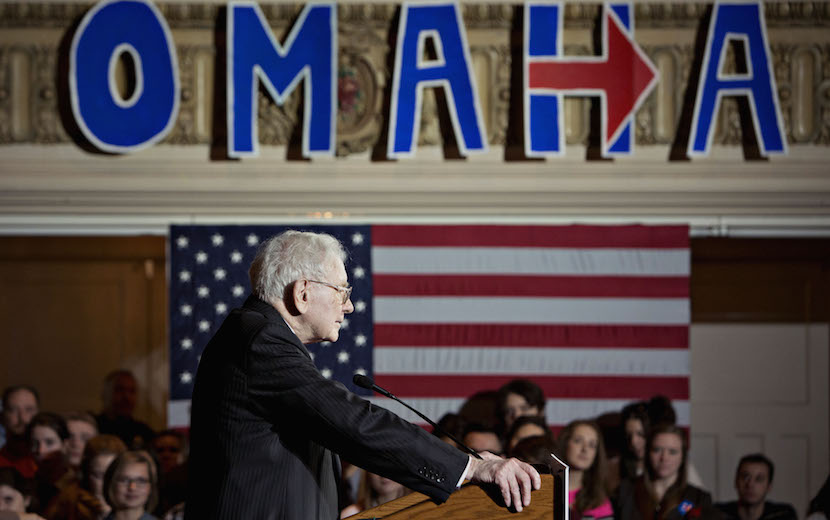 Warren Buffett, the Sage of Omaha, could enjoy an early gift from President-elect Donald Trump, say analysts. Proposed tax rate cuts could add billions to the book value of Berkshire Hathaway. This expectation has helped to massage the New York-listed investment company’s share price. This is ironic, as Buffett was strongly opposed to Trump becoming the next commander-in-chief of the US and publicly supported his rival Hillary Clinton. BRK has risen steadily since Trump emerged victorious from the election campaign. Although Trump won many votes by courting Americans who have been struggling against high unemployment, the Berkshire Hathaway upward bounce on the stock market indicates that market participants think Trump could be very good for big business. When the large US corporates do well, investors in funds tracking the major US indices do well, too. Maybe the world won’t stop when Trump is sworn in as US president on 20 January, after all? – Jackie Cameron

Bloomberg – Warren Buffett’s Berkshire Hathaway Inc. could get a $29 billion boost to its book value under tax-rate cuts advocated by President-elect Donald Trump, according to Barclays Plc.

“We would view this magnitude of increase as favourable for Berkshire shares since it is generally valued on price to book value,” Barclays analysts led by Jay Gelb said in a note to investors Monday.

Berkshire has jumped about 8 percent in New York trading since Trump won the Nov. 8 election, helped by the increasing value of Buffett’s holdings in bank stocks as interest rates climbed. The prospect of lower taxes is also helping. Gelb’s analysis covered a net deferred tax liability of about $50.4 billion at the end of 2015, a figure that includes potential costs if Buffett sells investments that gained in value. The review doesn’t take into account the DTLs at some energy operations, where benefits wold be enjoyed by utility customers and not Berkshire shareholders.

The value of the liability is based on the current 35 percent tax rate and would fall by about $22 billion at a 20 percent corporate tax rate and drop by $29 billion at 15 percent, Gelb wrote. Trump has called for cutting the business tax rate to 15 percent, while the House Republican “blueprint” for tax changes proposes 20 percent.

Buffett has long pursued strategies to limit tax payments made by Berkshire. Still, the billionaire supported Democrat Hillary Clinton in the presidential race, and has dismissed the idea that higher rates would discourage investment. He told shareholders in 2013 that when U.S. businesses say corporate taxes are too high, “I would have you take that with a grain of salt.”

The billionaire said at Omaha, Nebraska-based Berkshire’s most recent annual meeting that his company would thrive no matter who won the election.

“Berkshire will continue to do fine,” he said at the April gathering.

Gelb wrote that the change in book value wouldn’t correlate with an increase in cash. Rather it is a metric of financial strength monitored by investors and ratings firms. Berkshire’s book value was more than $270 billion as of Sept. 30. Buffett didn’t immediately return a message left with an assistant seeking comment.

The great irony: People who voted against Trump in the blue states will get most of @realDonaldTrump's tax cuts. https://t.co/ccA6584YSI