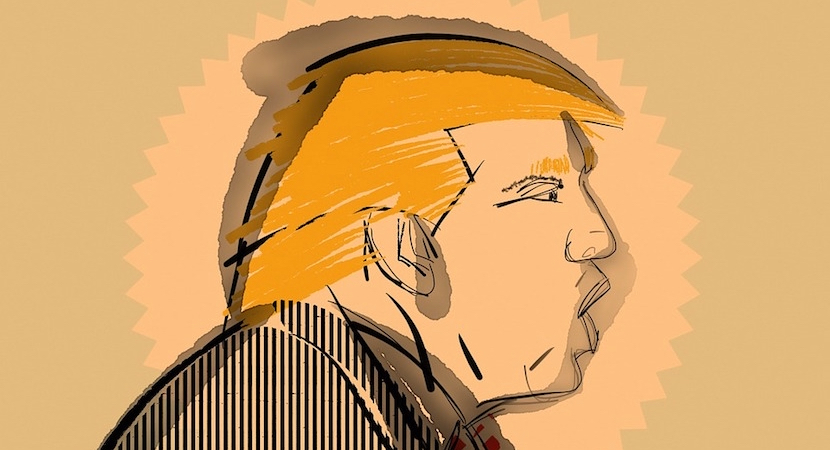 With apologies for reworking Hunter S Thompson’s famous quote; when political leaders get weird, the weird media gets going. Style transcends ideology, something never better illustrated than in the comparisons between Donald Trump and PW Botha by Die Burger’s Dr Leopold Scholtz in a recent article. Ed Herbst, who himself covered the PW Botha era and saw PW in all his oratorical, finger-admonishing glory, finds Scholtz’s astute observations of these two political bullies of anyone who didn’t agree with them, right on the mark. In a weird way, Botha spurred editors on to enjoy the riposte, even when it got downright nasty and personal – something anyone who watches media analysis of Trump on CNN or Fox News talk shows will immediately appreciate. One thing wily politicians soon learn is you don’t taunt, tease or prod the media crocodile, it will eat you for breakfast. Scholtz predicts that Trump will end up much like Botha – isolated and side-lined by his own inner circle and self-created enemies, an empty vessel going nowhere of consequence. The story that best summarises how spunky editor’s face up to bullying political leaders comes at the end of Scholtz’s article – and that of an editor of Die Burger facing down PW nogal! Would it happen today? We challenge any Biznews reader to cite a latter-day potential analogous example to dilute or dismiss the contention that it’s about as unlikely as Zuma falling on his sword and confessing all. – Chris Bateman

The excoriating rancour with which Donald Trump attacked the media during the US presidential elections and after his inauguration has been without precedent.

The antipathy is mutual – ask John Oliver, he’ll tell you

In a recent op-ed article in Die Burger, the newspaper’s foreign correspondent, Dr Leopold Scholtz, drew a fascinating local comparison citing an equivalent antipathy towards the media by the equally-irascible P W Botha.

I have to smile when I read articles by younger journalists like Verashni Pillay – who clearly haven’t done their homework – when they attack Helen Zille for being the ultimate media bully.

Former editors like Allister Sparks, Rex Gibson, Harvey Tyson and Tony Heard have all written about how they were summoned to PW’s office and subjected to an extraordinarily vicious harangue. Zille is mild by comparison.

I assumed it was just the editors of the English newspapers who evoked Botha’s wrath until I read in the Scholtz article of how Die Burger editor at the time, Wiets Beukes, had suffered a similar fate.

It was however, the conclusion that Scholtz reached that fascinated me – that Trump would end up like Botha – lonely, isolated and with more daggers in his back than a pin cushion has pins. I have translated his article into English and it will be fascinating, in the fullness of time, to see whether his prognosis is in any way clairvoyant.

Trump, like Botha, will end up lonely and isolated

Is there any similarity between P.W. Botha and Donald Trump? I am not talking about political ideas. I am referring to their style of politics.

In many aspects Botha was a surprisingly strong leader. While his predecessor, John Vorster, lacked strategic insight, Botha had a comprehensive anti-revolutionary strategy to foil the ANC/SACP uprising.

Today we know that it did not succeed because it failed to take certain aspects into consideration.

For instance, there was no insight into the influence of the economy and the demographics, resulting in the apartheid ship running onto the rocks. In addition, the Botha government did not take into account the extent of black people’s loathing of the white government – and the extent to which they regarded the ANC/SACP as ‘our people’.

However, during the first years of Botha’s government this was not that clear. Some hoped that Botha’s strategic approach would snatch the country from the jaws of an ANC/SACP dictatorship.

Botha’s role was twofold. He played for time which meant that the legalisation of the ANC/SACP after the fall of communism was no longer a threat, and the steps that F.W. de Klerk took in 1990 would not have been possible without Botha’s preparatory work.

The flipside of this is that Botha was a bad-tempered leader who permitted very little opposition within his own circle. In the second half of his rule in particular, when he became president, he started kicking friend and foe in the teeth, turning many good friends into bitter enemies.

I remember how Botha phoned the then editor of Die Burger, Wiets Beukes, in the eighties and gave him the dressing down of his life. This because he was displeased about something that had been published in the newspaper.

Not that the paper changed its approach thereafter. Botha succeeded only in having the good cooperation that once existed, deteriorate into rancour.

Therefore, when Botha isolated himself in the governing party around 1989, with the one knife after the other being stuck in his back, no one – including Die Burger – protected him. He brought this upon himself with his bullying style.

Botha in the old South Africa had far more power than Trump in America. With his style he was able to hang on for 11 long years, but not indefinitely.

By 1984, six years after taking over the reins, Botha really started overstepping the mark. Trump started doing this even before his inauguration and has never stopped since.

The latest example is his sudden accusation that President Barack Obama had his telephone tapped during the election campaign. From the outside it is impossible to assess whether there is truth in this, although his refusal to reveal any proof of this whatsoever (added to his proven habit of telling extremely tall stories) makes one somewhat cynical.

Far more so than in the old South Africa, the American political system forces a president to seek allies in the congress, the states and in civic society, otherwise he will not achieve much. Trump is kicking everyone in the teeth.

The hard core of his supporters in the country finds this wonderful. But the polls show that he is starting to lose the middle group which, in the election, gave him the benefit of the doubt. The day will come when he, like Botha, will stand alone, with dozens of knives in his back. No one will help him.

In closing: Not all editors suffered the Groot Krokodil’s verbal brutalising in stoic silence and there’s a lovely vignette in this regard in John Siko’s fascinating book, Inside South Africa’s Foreign Policy – Diplomacy in Africa from Smuts to Mbeki.

It is recounted by Theuns van der Westhuizen, veteran political journalist with Die Burger who recalls an acerbic conversation in the 1980s between Botha and the newspaper’s legendary editor, Piet Cillié who, at the time, was chairman of the Nasionale Pers board.

‘One evening in Port Elizabeth, they were discussing some issue, I believe group areas, and Piet Cillié said that no one could defend them any longer. And PW said, “Piet, jou moer.” (loosely – “Go to hell”). And Piet Cillié, a short stocky little guy – and PW was fairly tall – and Piet went up to P W, stood in front of him, looked up, pointed his finger at him in PW’s style and said, with great decency, “Eerste Minister, U se moer ook”. (“Prime Minister, respectfully, go to hell yourself.”)’

Can you imagine Iqbal Survé standing his ground and addressing President Jacob Zuma in those terms?