For a socialist government in (an albeit fraying) alliance with a communist party, perhaps the greatest irony is that rampant capitalists with very deep pockets are now paying, reportedly in full collusion with it, to try and alter the dominant media discourse. A Better Life for All, it seems is one in which the Zama-Zama Zuptoid (ZZZ’s) version of reality is fed to the populace, using their own money and that of the ZZZ’s chief benefactors. Startling revelations at the weekend point to the globally-effective PR firm, Bell Pottinger, being hired to portray the Guptas as victims of a white monopoly capital conspiracy. The story also neatly dovetails the Zuptoid-led assault on the country’s internationally-respected and highly efficient banks, well known top local business personalities and Finance Minister Pravin Gordhan. One allegation is that Bell Pottinger selectively ‘leaked’ the inter-ministerial committee recommendation for a judicial inquiry into the banks, pointing journalists towards a renowned Gupta ally, Fana Hlongwane. One Bell Pottinger rebuttal is that; “Our role is to correct misrepresentations of (the Gupta-owned) Oakbay and communicate the company’s belief that its competitive, disruptive, job-creating philosophy is what South Africa needs to achieve a genuine transformation”. The wording reveals just how sophisticated the PR firm is. Note; they address a principle but don’t engage with any of Public Protector Thuli Madonsela’s findings, nor the plethora of Gupta controversies that have emerged since. The story below is required reading if you want to navigate your way through the jungle of misinformation and ‘alternative facts,’ that pollute the public domain as the ZZZ’s fall asleep on the job in favour of self-interest and propaganda. – Chris Bateman

Cape Town – A document circulating in government circles, and which appears to have been compiled with the assistance of former Bell Pottinger employees, alleges that the firm played a major role in portraying the Gupta family as victims of a conspiracy that involves “white monopoly capital”.

The Sunday Times reported that new details have come to the surface, revealing how the Guptas and President Jacob Zuma called on the UK-based public relations group Bell Pottinger to win back support following the public outcry with the sacking of former finance minister Nhlanhla Nene.

Documents in possession of the Sunday Times and interviews with “key players” also allege the firm played a crucial role in a social media campaign that sought to avert attention away from the Guptas’ involvement in state capture towards state interference involving “white monopoly capital”.

In the Sunday Times report it is alleged that there had been a “heavy focus upon use of social media”, including fake bloggers, commentators and Twitter users in an attempt to sway public opinion – claims Bell Pottinger categorically denies.

Victoria Geoghegan, a partner and director at Bell Pottinger, told the Sunday Times that the company has nothing to do with the “so-called Twitter-bots phenomenon (automated Twitter handles that send out tweets, hashtags and links to or tweets purporting to be by organisations, and news websites) or any inappropriate personal attacks on journalists”.

“Our role is to correct misrepresentations of Oakbay and communicate the company’s belief that its competitive, disruptive, job-creating philosophy is what South Africa needs to achieve a genuine transformation,” the Sunday Times reported Geoghegan as saying.

Shortly after Bell Pottinger signed a contract – reportedly to be worth around R1.5m – there were indeed a campaign in which National Treasury and well-known business personalities, such as Richemont chairperson Johann Rupert, were targeted.

The Sunday Times’ sources confirmed that Rupert cut ties with Bell Pottinger due to allegations that the company (which was one of Rupert’s long-standing clients) were behind portrayals of him as the “face of white monopoly capital”).

The Sunday Times’ sources also claim that businessman Fana Hlongwane, who is closely linked with the arms deal, was a key figure in helping to establish contact between Bell Pottinger and the Guptas.

The sources say after the introduction by “a gentleman named Fana” (Hlongwane) the Guptas paid three months’ fees of a £100,000 a month in advance with the instruction that the family’s image was to be improved.

In July, Bell Pottinger contacted Fin24, saying it was in possession of the findings of an interministerial committee recommending a commission of inquiry into the country’s banks — two months before the findings were made became public.

The company told Fin24 that Mosebenzi Zwane, Minister of Mineral Resources, should be directly contacted.

(Zwane led the charge against banks after they had severed business relationships with the Guptas around April last year. The Minister allegedly has close ties with the Gupta family dating back to when he was MEC in the Free State.)

This meant that Bell Pottinger had known about the recommendations for a judicial inquiry into South Africa’s banks at least seven weeks before they were controversially published by Zwane. 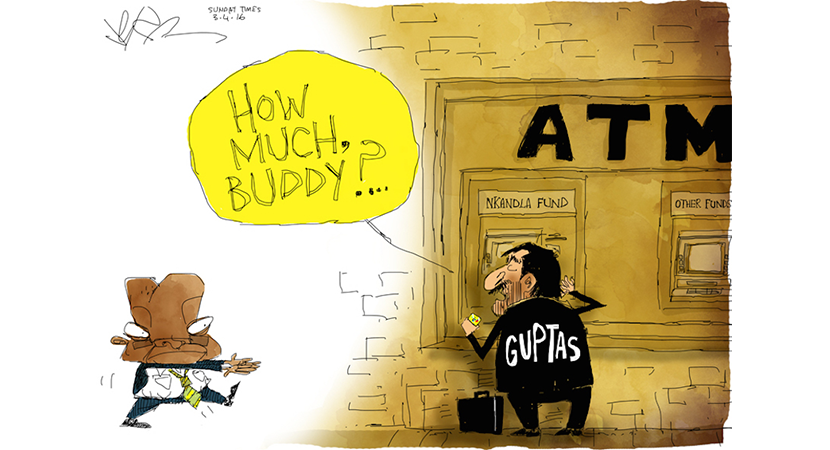 Zwane was severely rebuked by the ANC and the presidency after announcing on 2 September 2016 that the inter-ministerial committee set up by Cabinet to probe why South Africa’s banks blacklisted Gupta-owned businesses recommended that a judicial inquiry be set up.

At the time the Presidency and Cabinet distanced itself from Zwane’s statement about a judicial inquiry into the banking sector. – Fin24