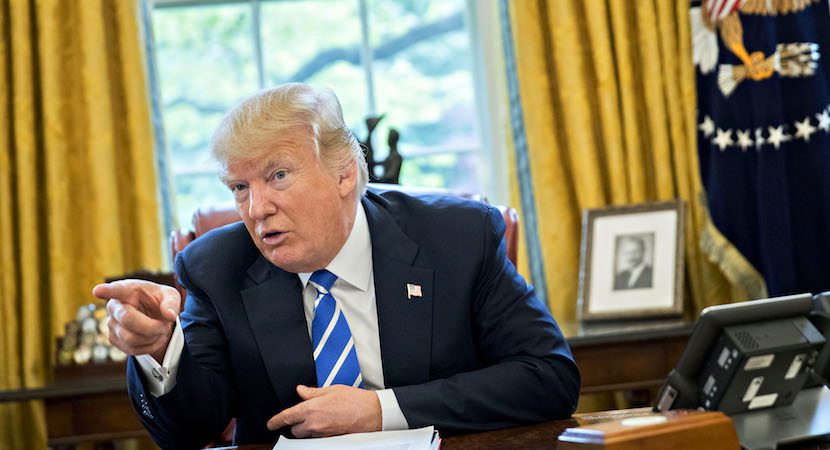 EDINBURGH: US President Donald Trump’s disclosures to the Russian foreign minister and ambassador during their Oval Office meeting last week jeopardised a critical source of intelligence on the Islamic State, the Washington Post has reported. The news organisation says the former reality TV star who is running the White House exposed an information-sharing arrangement considered so sensitive that details have been withheld from allies and tightly restricted even within the US government. “Trump appeared to be boasting of the ‘great intel’ he receives when he described a looming terror threat, according to an official with knowledge of the exchange,” said the report. President Trump’s team has once again pulled the ‘fake news’ card out of the pack, denying that intelligence sources or methods were discussed with a Russian diplomat. The row follows the axing of FBI director James Comey, who was investigating allegations that Russian interference in the US elections played into Trump’s victory at the voting stations. – Jackie Cameron

By Justin Sink and Sahil Kapur

The president, already fending off questions about his firing of FBI Director James Comey amid an investigation of possible collusion by Trump associates in Russian interference with the U.S. election, faced a new controversy after the Washington Post reported that the president revealed to Russia’s foreign minister and ambassador closely held intelligence from a U.S. intelligence partner about an Islamic State plot.

The “story that came out tonight as reported is false,” White House National Security Adviser H.R. McMaster said at a hastily arranged appearance outside the White House. “At no time were intelligence sources or methods discussed, and the president did not disclose any military operations that were not already publicly known.”

“I was in the room, it didn’t happen,” McMaster said in a statement that lasted less than a minute. He left without taking questions.

According to the Post, the intelligence involved information about an Islamic State plot to use laptop computers as possible weapons aboard commercial aircraft and had been provided by a U.S. ally with access to the inner workings of the terrorist group.

The newspaper cited unnamed current and former US officials with knowledge of the exchange, who said they recognized that it jeopardized intelligence capabilities. The Post said homeland security and counterterrorism adviser Thomas Bossert called the directors of the CIA and the National Security Agency afterward. One of his subordinates called for that portion of the discussion stricken from internal memos and circulation of a transcript limited to prevent sensitive details from being further distributed, the newspaper said.

The intelligence was held by the US at one of the highest classification levels that would typically prevent it from being shared even with allies, according to the Post. While Trump didn’t reveal the specific methods that developed the information or sources, he described elements of a specific plot and the city in Islamic State’s territory where the threat was detected, the Post said.

That specific information could be enough to let the Russians identify the source and method, according to one intelligence official cited by the Post.

“We have no way to know what was said, but protecting our nation’s secrets is paramount,” said Doug Andres, a spokesman for House Speaker Paul Ryan. “The speaker hopes for a full explanation of the facts from the administration.”

The revelation may have additional peril for Trump because during his campaign against Democrat Hillary Clinton in the fall he repeatedly assailed her “careless” use of a private email system while secretary of state, a practice he argued could have exposed classified information. He claimed that made her unfit for the presidency. Surrogates at his campaign rallies led chants of “Lock Her Up.”

Top lawmakers of both parties, while saying they weren’t able to confirm or deny the substance of the report, said it raised new questions about the administration.

“The White House has got to do something soon to bring itself under control and in order,” Republican Senator Bob Corker, who is chairman of the Foreign Relations Committee, told reporters at the Capitol. “Obviously they’re in a downward spiral right now and they’ve got to figure out a way to come to grips with all that’s happening.”

Senator Jack Reed, the ranking Democrat on the Armed Services panel, said sharing information without the permission of a foreign intelligence partner “violates a cardinal rule” of dealing with friendly agencies.

“If it’s accurate, it’s disturbing because it’s divulging information about operations in Syria which could be exploited not only by the Russians to interrupt intelligence operations that they feel are threatening to them,” Reed said.

The intelligence involved may be behind the US announcement on March 21 that electronic devices larger than smartphones would be banned from cabins on flights originating from 10 airports in the Middle East and Africa. The Department of Homeland Security has been considering expanding the restriction to flights from Europe.

The president has broad authority to declassify information so it’s not likely he broke the law, according to the Post, even though he shared it with a US adversary.

How we trick Trump into revealing top secret info to Russia. pic.twitter.com/GQQQkjhnLF

Trump met with Russian Foreign Minister Sergei Lavrov and Ambassador Sergey Kislyak one day after firing Comey, who was leading an investigation into possible collusion between Trump associates and Russian agents trying to interfere with the U.S. presidential election.

Trump has denied any connection to Russia while also questioning the assessment of U.S. intelligence agencies that the government in Moscow directed a campaign of hacking and disinformation to disrupt the election.