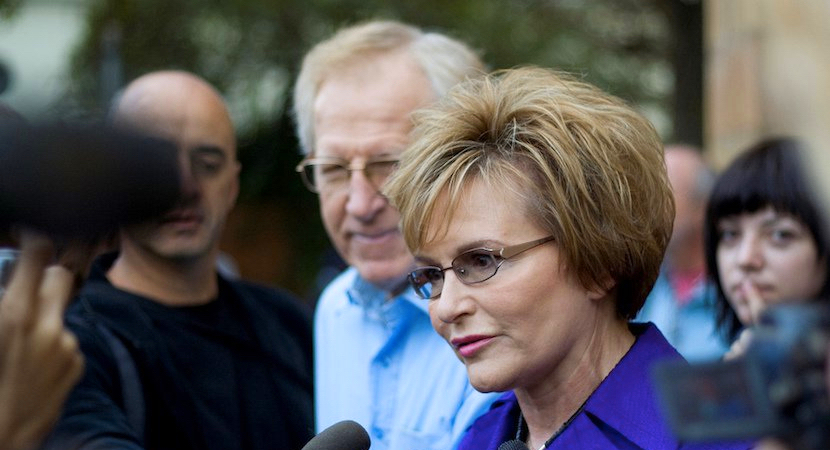 In this thoughtful, carefully considered piece, former national deputy leader of the Independent Democrats (remember them?), Simon Grindrod, undeniably and instructively compares two woman political trailblazers, Helen Zille and Margaret Thatcher. It’s an instinctive comparison, but when you see the long list of parallels it becomes positively fascinating. Both broke into formerly exclusive male territories; UK Prime Ministry and leadership of the Official Opposition. Both were done in by unnecessarily pushing politically volatile issues; the UK’s Poll Tax and SA’s Colonialism – neither of which were central on the political radar anyway. Both took their parties to new heights to be rewarded with almost unfettered reign – and both micro-managed while fending off militant political foes. The imagined almost meek entreaties from their husbands to ‘don’t go on love,’ is for me, the most amusing comparison, given that both spouses lived quietly in the background. The two men were content to let their wives revel in the spotlight and publicly blow off steam on issues they felt passionate about, but were, one would imagine, acutely aware of their partner’s Achilles Heels. A fun read if you feel the need to lift those Monday morning blues. The article was first published on PoliticsWeb. – Chris Bateman

“Love her or her hate her, you always knew where she stood”

These were the common public perceptions of Margaret Thatcher, the first female UK Prime Minister, upon her death in 2013 – a full 23 years after her forced resignation from office on 23rd November 1990. Nowadays, it is not the manner of her arrival for which she is remembered, but rather the manner of her departure.

The perceptions of Helen Zille in 2017, the first female leader of the Official Opposition in SA, could very easily mirror those of Thatcher in 1990. And the similarities do not end there. Is it possible that Colonialism could be Zille’s very own Poll Tax? That one step too far that leads to a premature and tearful exit.

Thatcher could never accept that her demise had been of her own making. Her decision to ignore concerns from her party and push forward with the hated Poll Tax was a bridge too far. Having given life and power to her party in 1979, perhaps she believed it was her right to do as she pleased. Mother knows best. Others were there to be instructed, not consulted. Her contempt for the dithering ‘wets’ in her government is legendary. Hugo Young explains this in his book ‘One of Us’ in which he describes her world in fascinating detail.

Her lasting bitterness towards those in her party who failed to support her was there until her passing. She had, after all, revived her party and delivered three successive general election victories. The fact that it was not the electorate, but her own cabinet, who brought her down created deep divisions which haunted the Tories for many years. It also cost them heavily with the electorate who perceived that their Iron Lady had been knifed by her own.

Just as Thatcher could have won again, I have no doubt that Zille could easily carry the electorate to another term as Premier (if rules allowed it). It is not the voters that threw Thatcher out, it was a small number within her own party.

To me, there have always been striking parallels with our own home-grown Iron Lady although, obviously, operating in an entirely different environment, level of office and century.

Both are enormously enigmatic personalities. Both transformed their parties and attracted new constituencies and delivered power. Both faced uphill battles in overcoming ‘old boy’ entrenched structures. Both had to work twice as hard to prove themselves. Both faced militant foes, in MT’s case unions and in HZ’s case the radicals in the ANC tripartite alliance. Both enjoyed a friendly media honeymoon followed by ruthless scrutiny later. Both had low profile husbands. Both preferred males in their Cabinets and saw no value in token feminism. Both made their mark in the political evolution of their nations.

In trying to understand the contradictions in the public and private personas of these two leaders, we need to note the huge detail and focus they put into managing their public image. Every scrap of policy, press statements, speeches and output had to be approved personally. They simply trusted nobody to get it exactly right. This resulted in micro-management and total control of their administrations. This makes it all the more incredible that they themselves miscalculated so badly.

To her credit, Zille had her finger more closely on the pulse of her party and knew exactly when to bow out as party leader. Thatcher pushed her luck too far and suffered great humiliation. Both ensured the election of their anointed successor before their departure to ensure continuity of their vision.

Thatcher created the conditions for her own downfall. Nobody either in her own party nor the public at large were demanding a Poll Tax. She scored an own goal ironically at a time when the Labour opposition were a shambles and no threat to her at all. The only conclusion can be that she felt bullet-proof and unassailable given her previous glory and adoring support base.

Similarly, although obviously on a much smaller scale, Zille has herself created her own difficulties. Nobody in her party, nor the wider public, were demanding her personal pronouncements on the historic legacy of colonialism. Even if they were, a party position could have been formulated and communicated. It was not a burning priority for either her voters nor for the country. Certainly not an issue that a provincial Premier should risk carrying forward alone.

It is a dilemma. The confidence, the fearless and outspoken beliefs of these Iron Ladies, generated popularity and success for their respective parties. They became huge assets to their organisations and maybe, through an unwritten understanding, they were allowed to run free as a result. The rules of accountability to party structures did not apply to them whilst they were delivering votes.

Sadly for both of them, they had perhaps forgotten that those they had humiliated or dismissed along their journey were waiting for just the right opportunity to pounce. Thatcher is now mostly remembered for the hated Poll Tax, her positive reforms and undoubted dedication to repairing the pitiful state of the UK in the 1970’s is somewhat eclipsed.

Zille no doubt genuinely meant what she said and said what she meant. That, however, is not the issue. The timing and manner of her pronouncements were always going to be manna from heaven for her opponents, and hugely offensive to the largest constituency who are justifiably sensitive to the subject. I have no doubt she knew this. That a reaction was anticipated is certain, the extent of it maybe surprised even her.

Given her unquestioned contribution to our country, both before and after 1994, it would be a cruel fate if her lasting legacy was remembered mostly for some ill-timed and provocative Tweets. Would Thatcher have lasted so long if Twitter was around in those days? I wonder if Mr Maree, like Dennis did, has quietly said ‘Don’t go on, love’ in a moment of concern for his wife?

I worked with (or for) Helen Zille for a time whilst she was Mayor Cape Town. We didn’t get along too well at all, but I do want to say that whatever else she may be, racist is definitely not one of them.

Spare a thought for Mr Maimane. He must attract swathes of new voters, stamp his authority on his party in the face of huge cynicism, juggle the various factions in his caucus, placate those who say he has no substance, and much more.

If Zille is thrown out, he knows both party funding and the traditional white voter base are at risk. If he doesn’t, he is weak and afraid and risks harvesting massive numbers of votes from new constituencies in 2019.

His best hope in such a predicament would be to ask Helen for advice. She will definitely know best. Perhaps, knowingly or unwittingly, this was her gift to him in so many ways.

One last thought. Can we imagine a new political movement created and driven by Helen? Things could get very interesting indeed.