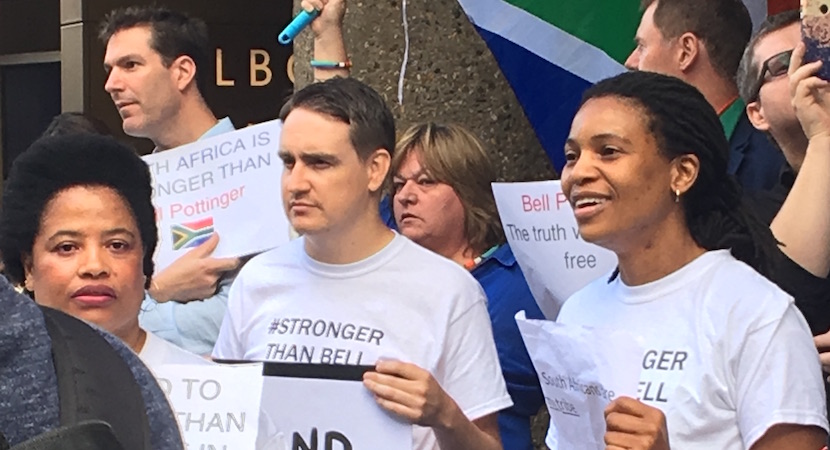 EDINBURGH — Lord Tim Bell, co-founder of dirty London-headquartered PR firm Bell Pottinger, has predicted that the business will not survive the #GuptaCurse. “It’s the end of the company,” Lord Bell told the Financial Times this week. “That’s 25 years of hard work gone down the tubes. It’s a great pity,” he is quoted as saying. UK media outlets are awash with news that Bell Pottinger is on the brink of collapse after stoking racial tensions for the “powerful” Gupta brothers. Companies have been dropping the big PR firm after the Public Relations and Communications Association (PRCA) terminated Bell Pottinger’s membership of the body for at least five years – its toughest possible sanction. The PRCA hearing was instigated by South Africa’s opposition Democratic Alliance, which laid a complaint against Bell Pottinger and has been fighting to bring an end to corruption involving President Jacob Zuma’s friends. As the Financial Times notes: executives from across the media and PR are writing the agency’s obituary. South Africans are delighted that Bell Pottinger may soon be out of business. Next in the sights of campaigners pushing to bring an end to state capture and corruption are big companies like KPMG and McKinsey. These global corporates have aided and abetted the Gupta and Zuma families in various ways – but have failed to take accountability for their actions in the face of mounting evidence of corruption and irregularity. The Bell Pottinger case highlights that placing profits before people can be costly and even fatal. Watch this space. – Jackie Cameron

(Bloomberg) — One of Bell Pottinger LLP’s biggest investors has severed ties with the embattled public-relations firm, along with a growing list of corporate clients that are deserting the U.K.-based company as it attempts to weather a reputational crisis. Bell Pottinger is evaluating options including a possible sale.

In an effort to distance itself from Bell Pottinger, Chime Communications Ltd, co-owned by advertising giant WPP Plc and Providence Equity Partners, returned its 27 percent stake in the London-based PR firm without compensation about two weeks ago, according to a person familiar with the matter who asked not to be named discussing details of the decision.

“We no longer have a stake in Bell Pottinger,” Chime said in an emailed statement.

Clients including banking giant HSBC Holdings Plc and construction firm Carillion Plc will no longer work with Bell Pottinger, the companies said Tuesday. Spain’s Banco de Sabadell SA, while still a client, is reviewing its relationship, according to a person familiar with the matter.

The crisis gathered pace this week after an investigation found Bell Pottinger ran a potentially divisive social-media campaign in South Africa on behalf of the controversial Gupta family. The firm was thrown out of the U.K. public relations industry body in an unprecedented rebuke by the Public Relations and Communications Association. Along with the client defections and Chime’s pullback, at least one partner has left the firm, according to a person with knowledge of the matter.

Consequences of racially divisive diversion campaign are dire for #BellPottinger. What should be the consequences for those that hired them?

Co-founder Timothy Bell told BBC’s Newsnight program on Monday that the agency is unlikely to survive. The company announced on Tuesday that it had hired accounting and consulting firm BDO “to look at all options regarding the future of the business,” according to an emailed statement.

“It’s probably nearing the end,” said Bell, who formed the firm in the 1980s after advising Prime Minister Margaret Thatcher on media matters. “You can try and rescue it but it won’t be very successful.” Bell left last year, citing the controversy over the Guptas as one of the reasons.

Bell Pottinger didn’t respond to an emailed request for comment on the client defections or Chime’s stake, which was reported earlier by the Guardian. The firm said earlier that it accepted there were “lessons to be learned” and that it would abide by the PRCA code of ethical conduct on a voluntary basis. Many employees didn’t work on the account for the Guptas’ Oakbay Investments Pty Ltd. and would consider applying for individual membership, the company said.

The saddest part about the #BellPottinger saga is that it's taken a UK body to bring some liability in #Guptagate.Local authorities sit idle

Bell Pottinger was found to have broken four clauses of the PRCA’s code of conduct and professional charter while working for the Guptas, who are friends with President Jacob Zuma and in business with his son. The rules state that members shouldn’t cause racial offense with their work and “deal fairly and honestly” with the public at all times.

A spokeswoman for Carillion told Bloomberg the company is no longer working with Bell Pottinger, though declined to comment on reasons why or precise timing. Bell Pottinger had issued press materials on Carillion’s behalf as recently as mid-July.

“We have used Bell Pottinger for specific projects in the past but will not be doing so in the future,” HSBC said in an emailed statement.

Chime’s decision to abandon its stake, valued at about 5 million pounds ($6.5 million), followed a 2016 effort to explore options for the Bell Pottinger holding, the Guardian reported earlier. Providence owns 75 percent of Chime with WPP, led by Chief Executive Officer Martin Sorrell, holding the remainder. They paid 347 million pounds to take Chime private in 2015.

“Chime is clearly walking away from a bad situation,” said Paul Sweeney, a Bloomberg Intelligence analyst. “It appears that Chime’s co-owners, Providence Equity Partners and WPP Group, sense the reputation risk is not worth the relative small cost to write down their investment.”

The agency has attracted attention in the past for taking on controversial clients like former Chilean dictator Augusto Pinochet’s foundation. According to a 2016 report by the Bureau of Investigative Journalism, a U.S.-funded anti-Al-Qaeda propaganda campaign that Bell Pottinger carried out in Iraq included fake insurgent videos used to track those who accessed them.

Cie Financiere Richemont SA, the luxury-goods company controlled by Johann Rupert, South Africa’s richest man, ended a contract with Bell Pottinger last year. Rupert, who has a net worth of $8 billion, told the annual meeting of his investment company Remgro Ltd. that he had been a target of the company’s social media campaign, Johannesburg-based Business Day reported on Dec. 2.