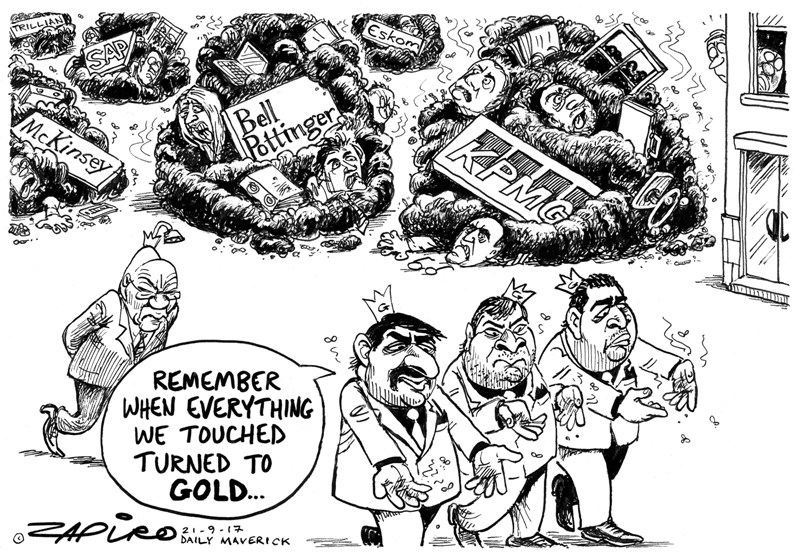 CORRECTION: My context above the Bloomberg story has been changed and updated to reflect how the FSB might decide to rope in international investigators but that this hasn’t been confirmed or indeed happened. While I previously mentioned that Jacques Pauw’s book, The President’s Keepers, sparked off the Bloomberg story, this I understand is not correct and I have made the change in the context. (Gareth van Zyl)

JOHANNESBURG — The Guptas are under the spotlight for allegedly having lent about $1m to a Singaporean aide of theirs who then, in turn, used that money to trade in Oakbay’s debut 2014 JSE listing. The Singaporean trades resulted in a totally inflated share price for Oakbay. As stock market artist James Gubb told me in an interview, it’s insider trading of the highest order. Now, it looks as if the FSB is taking the Oakbay matter very seriously and it might consider roping in international investigators. Apart from the likes of the FBI and the UK’s Serious Fraud Office, the Guptas now have more headaches to contend with. They deserve everything coming their way. – Gareth van Zyl

(Bloomberg) — South Africa’s stock-market regulator said it has started a formal investigation into trades in Oakbay Resources and Energy Ltd., a company controlled by the politically connected Gupta family, and may seek assistance from international supervisory bodies.

Read other top stories on BizNews: The Times winds down – a sign of things to come for print media – Harber

A preliminary probe into the November 2014 dealings has been completed, and if needed, the Financial Services Board will contact counterparts in other countries, the Pretoria-based authority said in an emailed response to questions on Monday. It can approach regulators in more than 100 nations that have signed the International Organisation of Securities Commissions Multilateral Memorandum of Understanding to combat cross-border fraud and misconduct, the FSB said, declining to be more specific.

The FSB probe ratchets up the pressure on the Guptas, who are embroiled in a corruption scandal linked to President Jacob Zuma, a friend of the family and the father of one of their business partners. At least one international company that has done business with firms controlled or linked to the family is being investigated by the U.S. Department of Justice and the Securities and Exchange Commission, while a U.K. lawmaker has demanded some British lenders be probed for handling transactions for the family. The Guptas haven’t been charged and the family and Zuma have denied any wrongdoing.

Read other top stories on BizNews: Zimbabwe blow: Gucci Grace on the rise as Mugabe gets set to rule from the grave

Gary Naidoo, who has previously commented on behalf of the family, said he no longer works as a spokesman for Oakbay and two requests for comment to an email address he provided went unanswered. An attempt to locate a media spokesman for Sahara Computers, a business controlled by the Guptas, failed and a call transferred by the receptionist at the Johannesburg-based company to one of the directors went unanswered. A lawyer representing the Guptas in a court case said she doesn’t know who can comment on behalf of the family.

A trove of emails seen by Bloomberg showed that family money was used to inflate the share price of Oakbay Resources on its Johannesburg Stock Exchange debut three years ago. The Guptas boosted the value of Oakbay by lending money from a Dubai bank account to a Singapore firm, which then transferred cash to Oakbay in South Africa via Hong Kong in exchange for shares, the emails seen by Bloomberg show.

A director at the Singapore company was then instructed by an Oakbay employee to sell 20,000 securities, according to the emails. On the day trade opened, 20,000 shares changed hands and closed at 10.08 rand, setting Oakbay’s market value at 8 billion rand ($564 million). That’s more than 48 times full-year revenue whereas most Johannesburg-based mining companies have sales that exceed their market value. The company delisted its shares in July after directors resigned and its sponsor and transfer secretaries quit.

“Each investigation has its own set of complexities that determine the length,” the FSB said. “We will issue a press release when the investigation is finalized.”

The Dubai Financial Services Authority, Hong Kong’s Securities and Futures Commission and the Monetary Authority of Singapore are signatories to the memorandum of cooperation.

Earlier this year, the Johannesburg Stock Exchange referred details of trading in Oakbay’s listing to the FSB’s Directorate of Market Abuse for further investigation, according to JSE Chief Executive Officer Nicky Newton-King.

The Gupta family has been accused of using its friendship with Zuma to interfere with cabinet appointments and win contracts from state companies in what has become the biggest scandal in South Africa since the end of apartheid in 1994.