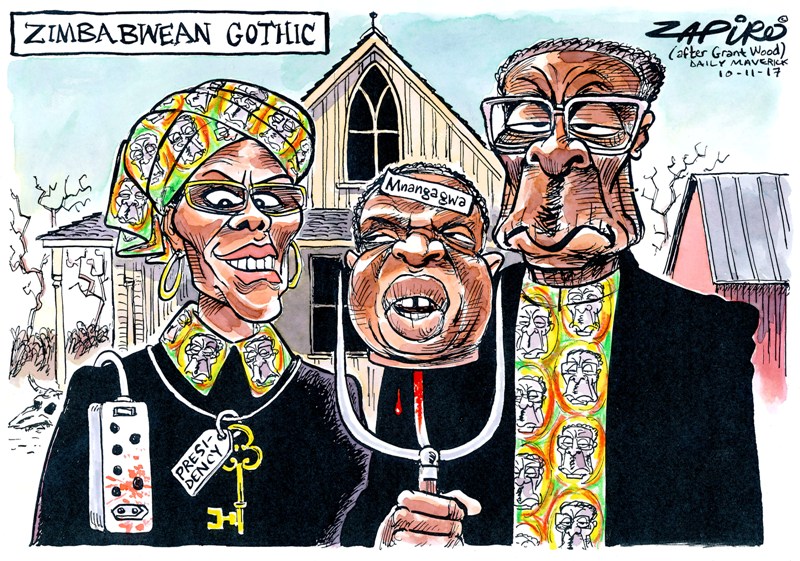 EDINBURGH — Just when Zimbabweans thought life couldn’t get any worse, indications are that the Mugabe family are getting serious about entrenching a dynasty. The Harare airport has been renamed in honour of the world’s oldest president and next year there will be a public holiday in his honour. With Robert Mugabe’s days looking numbered even to him, Grace Mugabe – reviled by many for her extravagant lifestyle and vicious temperament – is working hard on securing her place as the next president. Grace and Robert have successfully pushed former Zimbabwean Vice President Emmerson Mnangagwa out of the way. Al Jazeera highlights how a flurry of party endorsements and parades in honour of Zimbabwe’s first lady could mark the stirring of a national political dynasty for the Mugabes, as provinces within the ruling Zanu PF endorse 52-year-old Grace. The jury is out over whether the army will support the Mugabe family. – Jackie Cameron

(Bloomberg) —Former Zimbabwean Vice President Emmerson Mnangagwa fled the southern African nation because of “incessant threats” against him and his family two days after he was fired by President Robert Mugabe.

Mnangagwa, 75, said Wednesday in a statement that he never planned to harm Mugabe, who he’s been supporting for more than four decades, and pledged to work to establish a “new and progressive leadership” in the ruling Zimbabwe African National Union-Patriotic Front. “You and your cohorts will instead leave Zanu-PF by the will of the people and this we will do in the coming few weeks,” he told Mugabe.

Mnangagwa fled to neighboring South Africa, according to a person familiar with the situation who declined to be identified because the politician’s whereabouts have not been publicly disclosed. Zanu-PF expelled Mnangagwa, party spokesman Simon Kaya Moyo said after a meeting of the politburo in the capital, Harare.

His dismissal marked a dramatic shift in politics in Zimbabwe, where he had been a pillar of a military and security apparatus that helped Mugabe emerge as the nation’s leader after independence from the U.K. in 1980. He was Zimbabwe’s first national security minister.

Now Mugabe, 93, has broken with most of his comrades who fought in the liberation war, leaving the so-called Generation 40 faction of younger members of the ruling party championed by his wife, Grace Mugabe, in the ascendancy. The final outcome of the power struggle could be determined by the military and the stance of the 61-year-old commander of the army, Constantine Chiwenga, who traditionally supported Mnangagwa.

Mugabe said he fired Mnangagwa because he was plotting against the government.

“We dealt with him and hope we can deal with others who were conspirators alongside him,” Mugabe told party supporters Wednesday in Harare. “They should be dealt with and thrown out.”

The Zimbabwe National Liberation War Veterans Association condemned Mnangagwa’s dismissal and said it was breaking with the ruling party.

“The party and indeed the nation is being traumatized by one person, Robert Gabriel Mugabe, who is bent on maintaining his hold on power and ensuring that he passes on this power to his wife in a dynastic fashion,” the group said in a statement Wednesday. “We are stating in no uncertain terms that we have completely disowned Mugabe. He is no longer one of us.”

The veterans are calling for support from western nations and countries in southern Africa to help maintain peace and ensure free elections in Zimbabwe, a leader of the group, Chris Mutsvanga, told reporters Wednesday in Johannesburg.

Ousted vice-president Emmerson Mnangagwa, who has fled Zimbabwe, vows to return one day to lead the country.

“We are busy organizing the people, and all we want now is regional help so the situation doesn’t become bloody under the control of a mad woman,” he said. “You don’t allow a cabal of thieves and a mad woman to do this. The army is very professional, we don’t want them to be the arbiters of what’s constitutional.”

Mnangagwa’s firing and expulsion from the ruling party came amid growing tensions before elections next year when it may face a seven-party opposition coalition that’s capitalizing on public anger over cash shortages, crumbling infrastructure and a collapse in government services. The economy has halved in size since 2000.

“I don’t think the army guys will take it lying down,” Annie Chikwanha, a Zimbabwean professor of political science at the University of Johannesburg, said Wednesday. “Other than the presidential guard, I don’t think Mugabe really has control over the rest of the armed forces. There is also massive disillusionment with the state of the economy. I don’t think we can rule out a major show of force by the army.”

Supporters of Grace Mugabe, 52, gathered outside Zanu-PF headquarters on Wednesday with banners calling for her to be named vice president. Mnangagwa’s dismissal came after she accused him of plotting against her husband. She made similar allegations against then Vice President Joice Mujuru, who also fought in the liberation war. Those led to her ouster three years ago.

“Grace has always had this agenda to get rid of this entire cohort of liberation struggle people,” said Chikwanha. “She is almost succeeding — the war veterans have been alienated.”

While Mugabe is the party’s candidate for the elections, Grace, the president’s former secretary whom he wed in 1996 after the death of his first wife, said on Sunday that she’s ready to succeed him.

Robert Mugabe has just fired his vice-president, Emmerson Mnangagwa. This clears the way for his wife Grace to succeed him.

Her announcement came as Zanu-PF is planning to amend its constitution at a congress next month to ensure that a woman is appointed to its top body, known as the presidium. It currently comprises the president, Mnangagwa and Zimbabwe’s other vice president, Phelekezela Mphoko.

“We’re experiencing what’s clearly the unraveling of the state under Mugabe and, more significantly, the un-bundling of the securo-state in which Mnangagwa and defense force commander Chiwenga are a part,” said Ibbo Mandaza, head of the Southern African Political Economic Series Trust in Harare.