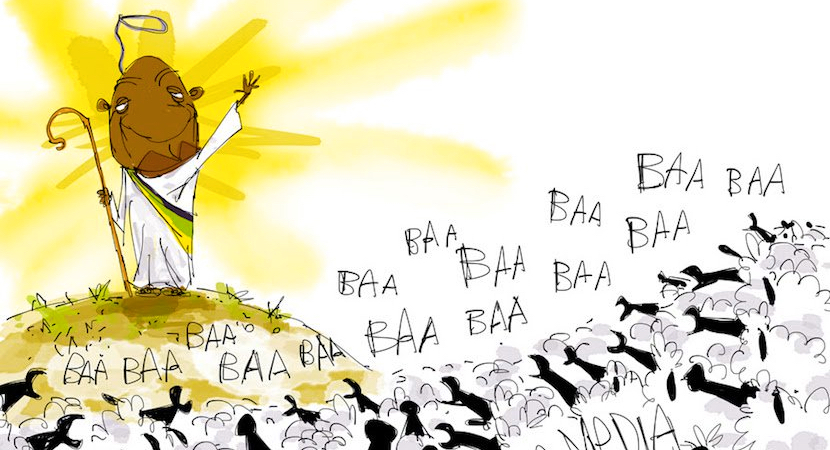 CAPE TOWN — Political vigilance, hopefully turbo-boosted by the slow but inexorable state capture of the Zuptoids, can help us re-examine party policies and practices and avoid falling prey to Ramaphoria. Conditions remain to allow men of lesser moral stature – and our cabinet is still full of them, to second-guess Ramaphosa at every turn, U-turning us back into the corrupt crevasse. Reputation management advisor and columnist Solly Moeng, while giving credit where it’s due, fantasises the recusal of Zuptoid ministers when State capture is on the table at cabinet meetings. Simply not going to happen, anytime soon, but it graphically illustrates why we need to keep a sharp eye out. Ramaphosa is hopefully less prone to conflating the ruling party with the State than many of his ministers, but it is kind of what the job does to you. One of Moeng’s prescriptions to avoid a repeat Zuptoid-type contagion? Bring in smarter legislative tools to make sure that state capture of any form never visits our shores again. Also, changing the proportional representation system and the ANC’s own Constitution to prevent provincial nepotism would help. This piece was first published on Fin24. – Chris Bateman

Some people get upset with those of us who seem impatient with President Cyril Ramaphosa, urging us to keep quiet, sit back, be grateful, and let him do what he must.

Their stance is understandable, of course, and, like them, many of us share the exuberance that followed the removal of former president Jacob Zuma, albeit with a healthy dose of caution.

Once bitten, twice shy. But it is unreasonable for those who urge us to sit back to expect us to let our guard down completely, simply because Zuma is no longer president.

Some good work has begun, no doubt – and it was about time for Tom Moyane to be removed from running SARS, but much remains to be done.

In fact, some of the work many of us want to see done will not be accomplished ahead of the next elections, because – we get told in all tones imaginable – tackling it before then would harm the unity of the governing African National Congress.

As usual, the unity of South Africa can wait a little while longer, it seems.

Celebrate Ramaphosa, but also strengthen his hand by remaining vigilant

Despite his good intentions, Ramaphosa didn’t come into the presidency of the ANC as politically strong as was his predecessor, Zuma, when he took over from former president Thabo Mbeki. Ramaphosa came almost as a poisoned chalice, surrounded by some very shady characters claimed to be implicated in corruption and state capture.

Those characters remain in place, even when relatively smaller pawns are being made to fall. The party positions occupied by them are so powerful that it is inconceivable to imagine any of them being asked to step outside the room and recuse themselves when high level discussions are being had about how best to effectively deal with the remnants of state capture still walking the corridors.

It’s also not helpful when one hears whispers by people who claim to know what is happening in the corridors of power, that sinister plans might be under way to remove Ramaphosa in 2019 and replace him with David Mabuza, his political chess playing deputy.

Ramaphosa might not have arrived out of the heavens on a chariot of fire to save us from monsters, but I’m still thankful that he, and not another person under the current circumstances, is interim president ahead of the next general elections.

In fact, I find him likeable and way more presidential than many; but that too is no reason to be fooled into believing that our troubles are over.

So, since some of us are not here to place cushions around well-paid politicians and we do not all look at the world and our country solely from a prism dictated by ANC priorities, we have to remain cynical, look politicians in the eye – including Ramaphosa – and constantly remind them that the interests of South Africa, not those of the political formations they’re part of, must come first.

If Ramaphosa is the good, wise, leader he strikes me as, he will not let paranoia and fear of constructive criticism be his overriding characteristics.

A good leader doesn’t thrive only on the throng of sycophants who surround him or her, fearful of looking them in the eyes when the need arises to tell them they are wrong and who spend their time second-guessing the leader and making access to them impossible.

The danger for Ramaphosa is inside, not outside, the ANC

In a strange way, and going by what gets said around braai fires, if harm were to come to Ramaphosa it is more likely to come from the belly of the party he leads, not from outside.

It is while walking the party corridors that he must look over his shoulder from time to time and make sure the food and drinks he gets served have not been tampered with, not while taking his increasingly popular morning walks surrounded by throngs of well-wishing ordinary South Africans.

The powerful people who stand to lose if Ramaphosa does his work well and succeeds in pulling South Africa from the edge of a reputational precipice are in the party he leads; not in the broader South African society.

The president just needs to master the art of using the praise/criticism combo he gets from broader South Africa as reasons to keep reminding his party comrades that the people of South Africa – beyond the people of the ANC – are watching him and want him to succeed.

In him they see light. If he succeeds, we all succeed. If he succeeds, South Africa will regain its glory and claim its rightful place in the global community of nations without worrying that others might be whispering negative things behind its back.

He must, therefore, succeed for South Africa. If he does, the party he leads might just be given another mandate in the next general elections.

But having said the above, we would be doing ourselves an injustice as a country if we allow our memories and judgement to be clouded by the Ramaphosa star.

The Zuma years have shown us the weaknesses that exist in the way our democratic institutions are structured, in how they’re resourced, and in how they operate.

Apart from the total removal of state capture and corruption-implicated individuals from positions of power in public institutions, we should call on all parties aiming to contest elections in 2019 to tell us what measures – in terms of policies and delegation of authority – they intend to help put in place to ensure that no political party or leader ever goes rogue on us again, and does to us and to our country what Zuma did.

Relying on the goodwill of smiling and well-spoken men and women in politics to shield us from such horrors would be naïve in the extreme.

An intricate raft of legislative tools have been put in place since 1994 to make sure that apartheid never returns to South Africa again. That is reassuring.

Over the next period smarter legislative tools, checks and balances should be put in place – through requisite public participation processes – to make sure that state capture of any form never visits our shores again.

They should also ensure that influential people who go rogue on us, whether elected or appointed, are easily disposed of before the cancer they bring again compromises our country’s political and socio-economic trajectory.