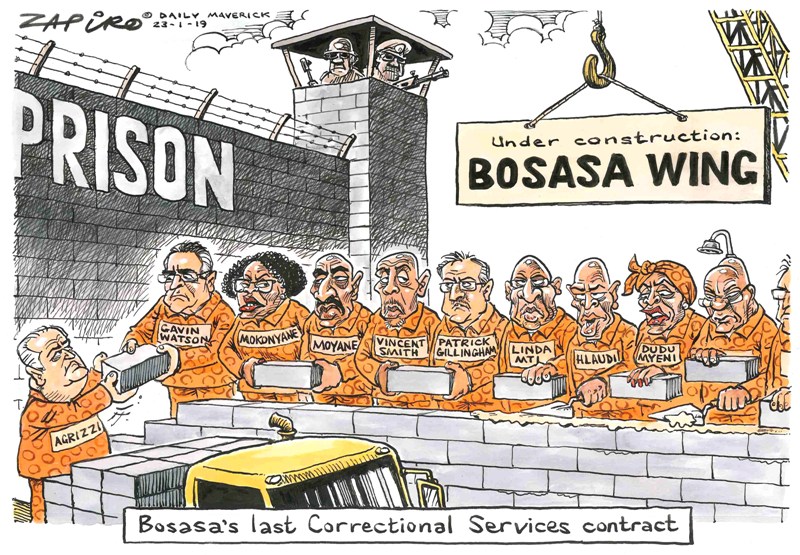 LONDON — Our weekly columnist Simon Lincoln Reader takes a break from Brexit to share his thoughts about South Africa’s Bosasa scandal, sharing some memories from the organisation’s early days. Those days must seem like a hundred years ago for the once imperial Watsons, a couple of whom I got to meet after my colleague, the late Barry Sergeant, roasted them back in 2009. The brothers laid on the charm after Barry ripped into them for being gifted shares in Simmer and Jack through a Black Economic Empowerment scheme called Vulisango. He reckoned it was simply because they were members of the ANC; the Watson brothers argued rather differently. More’s the pity that Barry is not with us to witness so many of his former foes finally getting their comeuppance. – Alec Hogg

O’Sullivan’s First Law of politics states that any organisation or enterprise not actually right wing will over time become left wing. I went the reverse; during early exploration, I visited the Bosasa Youth Correctional Facility in Krugersdrop in 2003 as part of an educational group.

Two colleagues and I toured the premises, starting with the living conditions, admittedly appalling, before some of the kids – aged between 11 and 15 if I recall – started following us. I liked them. Some were shy, some overconfident, some a little menacing but all were linked by that most inalienable feature of South African consciousness, neither left nor right, the indisputable correspondent behind violent or senseless crime, the lack of opportunity – or willingness to seize it when it appears – the temptation of submissive dependence coupled to loyalty toward disgraced or incompetent leaders: every single one of the 100 or so young men assembled there that day had been born into a fatherless household.

So into this void a government-sanctioned custodian was thrust, ostensibly to help navigate the limited scope afforded to vulnerable lives. Nearly two decades later, the irony of Angelo Agrizzi’s revelations is impossible to contain.

I can’t quite remember just how many times I heard a village idiot declare, “oh, ja, well I know the Watsons” (always as an expression of self-importance or influence), but I think it must be over fifty.

We have suffered an oversupply of village idiots on the various dreary Watson issues over the years, all of them, a reservoir of people so daft or impressionable that they genuinely believe or believed the stories of these crusading, teetotaling, reborn-extremist maniacs, like those Americans you watched performing in a Church to the discomfort of the vicar, breaking out of handcuffs or ripping up Yellow Page directories, with obscene strength that had nothing to do with anabolic steroids, oh absolutely not – but everything to do with Him.

Central to the Gupta’s strategy was the illusion of resistance against monopoly capital. For the Watsons, it was the Lord. I put a tenner down last week that there’ll be an escape soon – every single one of them –  probably to Australia. In which case, good, but won’t be the first time that wretched country has had to accommodate a bunch of possessed Scottish missionaries.

The fortunes of the Watson’s echo north across the continent, to grim Peterborough, where the former Labour MP Fiona Onasanya faces three – possibly more – months in jail for perverting the course of justice by colluding with her brother to avoid a speeding ticket.

Fiona too has come out with her Bible, not only refusing to resign as an MP but likening herself to Moses. When I was exposed to this defence I immediately consulted the Bible but found no evidence that Moses had a brother called Festus, who happened to be a convicted armed robber.

Fiona is also a Corbynista. Cue another layer of excuses – she’s a left-wing black woman, she claims, so this whole ticket-thing is just a right-wing stitch-up. Of course it is.

Because he’s Donald Trump, the President of the United States was savaged in The Guardian for recognising Venezuelan opposition leader Juan Guaidó as President. Signatories on a letter sneering that only Venezuelan citizens have the right to determine their leaders included Shadow Chancellor John McDonnell, Diane Abbott (naturally), the deeply troubled and possibly certifiable Chris Williamson, Owen Jones and a rapper called ‘Lowkey’.

“Progressive” governments, like Canada, didn’t get this treatment, even though they did exactly the same thing – as did other socialist Latin American governments. But what the signatories to this letter have done here, apart from outsource their common sense to Twitter and its Antifa death squads, is basically to say to the Venezuelan people:

“Eat shit you peasants, you don’t get to overcome our ideology that easily.” 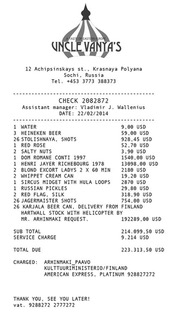 To put this into context: in 2017, a court of Nicolás Maduro’s judicial lackeys stripped the National Assembly of its powers, at the time controlled by the opposition (the equivalent would be Donald Trump refusing to recognise the Democrat majority in House of Representatives as determined by the mid terms last year). Nicolás is illegitimate, but the left won’t hear a word of it, opting now for “quiet diplomacy”.

Well I never. Brilliant idea. “Quiet diplomacy” is an excellent solution. Works a treat, doesn’t it?

And speaking of the left, what do you make of this? This bill involves the behaviour of Paavo Arhinmäki, Finland’s former Minister of Culture and Sport, one night at the Sochi Olympics in 2014.

Even if it is a little fabricated (e.g “salty nuts”), I’ll place another wager: before the Zondo Commission concludes, South Africa will produce revelations of avarice on the part of an elected official that will easily – easily – compete with this.