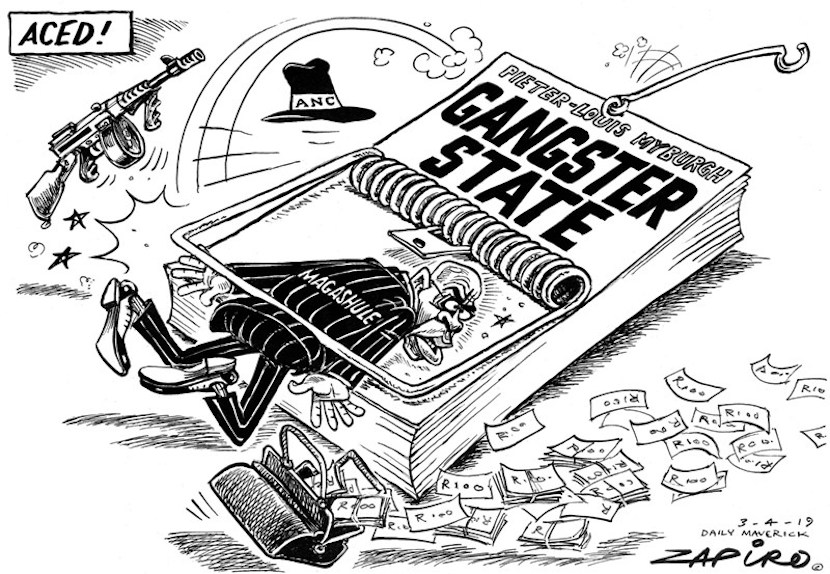 CAPE TOWN — While Gangster State author Pieter-Louis Myburgh is being sued for R10m by Durban businessman and an erstwhile friend of the book’s main protagonist, ANC secretary general, Ace Magashule, Ace himself resorts to playing the racist card. As reflected in Simon Lincoln Reader’s satirical column, Ace recently trashed Myburgh on an election platform, calling him a ‘young white boy,’ who knew little or nothing of the struggle. Still no lawyers mind. Rubbishing your detractors is a way better political strategy, one the Zuptoid-ruled ANC-hired a top PR agency to perfect. Magashule’s developer-associate however, Durban’s Vikash Narsai would prefer us to read the expurgated version of Mybergh’s expose – the one without the chapter alleging he paid bribes to secure a R220m Free State housing tender from government officials. Myburgh claims it took five years for Narsai’s company to build 200 of the 1,000 houses in Vrede, a peaceful pace to be sure. But back to Ace. Reader says if his struggle credentials were genuine, Magashule would at least have Tito Mboweni watching his back, while the opposite probably pertains. He moves seamlessly on to savage characters on Britain and America’s ‘looney left,’ be it an inaccurate New Statesman writer or Jeremy Corbyn, the former whom he fantasises Trump would typify as worse than Senator Bernie Sanders. – Chris Bateman

If Ace Magashule had made that significant a contribution to the “liberation” of South Africa, two things would have likely happened: i) he wouldn’t have taken such exception to the allegations contained in Pieter-Louis Myburgh’s “Gangster State”, safe in his own conviction that he had, and ii) people like Tito Mboweni would have rushed to his defence.

Last Saturday, against the President’s instructions, Ace chose a forum that was supposed to be for ANC campaigning to describe Pieter-Louis as a racist, accusing the author of being a “young white boy” who wasn’t around to witness the Secretary General’s “unimpeachable commitment to the struggle” (words I’ve stolen from Durban businessman Vivian Reddy’s defence of Carl Niehaus in 2009”). See how this thing works?

I have adjusted the text of The Economist’s support of Cyril Ramaphosa so you may avoid any confusion emerging from their most recent coverage of South Africa:

“Guttendag ‘k so basically we’re The Economist and our new editor is nuclear woke and SO much better than you miserable oiks what we’re saying is we’re very civilised and we don’t actually have time to understand what voodoo-bongo politics is going down in Nambabwia South Africa but um yes Cyril we know him did a program in Flemish on cats in canal boats so funny ha ha ha no man that one comes to Davos every year vote for him and we’re not interested in what this womxn Helen Zilly or whatever thinks when she says you will actually be voting for the ANC crook from the Free State and said crook’s little shrew of a deputy but don’t listen vote for him even though mad Helen says there is no guarantee that he will survive the onslaughts of crooks and shrews and that he has been complicit in policies that continue to impoverish black people but whatever losers…Oh for God sakes this is boring but we like the fact there are giraffes on the airport runway in Johinsberg and yup that’s it vote for Cyril we have been invited by Belgium’s Weirdo of 2019 and current Prime Minister Charles Michel for beers downstairs paid for by the UK so skol for us and sucks to you jackasses”.

It’s not all bad news. Last week The Spectator managed to secure the tape of The New Statesman’s interview with Sir Roger Scruton and as I previously suspected, the deliberate smearing of Britain’s greatest thinker is indeed worse than initially anticipated.

Take what the New Statesman, through its scheming liar George Eaton, claimed Sir Roger said about young black men joining gangs: “I know its something that is special.”

And now take what Sir Roger actually said (as recorded): “I don’t say it is something special to black people.”

You saw that right; Sir Roger said the complete opposite to what was published.

One of the things that I love so dearly about Britain is its celebration of the eccentric. I’ve come to realise how fiercely guarded this is in the case of Sir Roger’s treatment, which has not been interpreted as a miscarriage of justice, but absorbed as an attack on revered memory.

I have not witnessed anger like it before – not even in the worst of Brexit uncertainty – a wave of loathing and revulsion and exploding despair against everything Theresa May and her lily-livered ministers are trying to prove by genuflecting to this generation of professional offence-takers and race-hustlers.

I was with a friend the day Jeremy Corbyn announced that because: racism and because: misogyny, he refuses to dine with President Donald Trump during the latter’s state visit scheduled for early June. So together we envisaged a scenario whereby Donald would be told of Jeremy’s repudiation.

My friend correctly stated that, because this wasn’t interesting news, Donald would probably be told on Saturday afternoon, despite Jeremy making the announcement on Friday morning, and that, in all likelihood, it was said in passing. Donald, we considered, might have been watching golf, bucket of KFC in front of him either as a snack or to compliment the cheese burgers he had for lunch, 2 litre Coke to boot. “Who the f*** is Jeremy Corbyn?” My friend imagined Donald, looking puzzled, asking an aide.

Except I don’t think that’s accurate, the asking about Jeremy Corbyn-bit anyway. I’m concerned that Jeremy’s prospects are still being underestimated – after all, people like George Eaton’s journalism, if you dare call it that, is very much a consequence of Jeremy’s world view.

I think that Donald knows exactly who Jeremy is, because Donald’s security advisors have briefed him. They’ve presented a man who dines with Hamas, who admires Venezuelan economics and cheers when Nicolas Maduro’s thugs drive over protestors in Kaspars, under whose leadership anti-semitism in the Labour Party has spiked and whose posh-boy strategist, Seumas Milne, goes around declaring that Israel and ISIS are in alliance. “Awesome, because that one is worse than Bernie,” he would have uttered. My guess at least.