A particularly nasty move by graft-tainted Zuma allies was to develop a narrative about a unit within the South African Revenue Service that had gone “rogue”. This story was concocted to discredit corruption-busters within SARS. Involved in this dirty game were professional services firm KPMG and former public relations company Bell Pottinger, which both made it their business to apply significant political pressure on former finance minister Pravin Gordhan – who had Zuma’s number and was pressing for justice. At the time, the Zupta faction was too powerful for the good guys within SARS to win the battle. So they left, worse for wear. But, they are still fighting – and they are still demanding that their names be cleared. Leading the charge for those falsely accused of operating a SARS rogue unit has been Johann van Loggerenberg, who has written and co-authored books on what went on behind-the-scenes at SARS. Van Loggerenberg highlights on his Facebook page that there are many lies that are still being peddled and which must be cleared.  Here are just 55 of them. – Jackie Cameron

It is my contention that the “SARS rogue unit narrative” introduced key allegations and themes to support it. Some as headlines, most as fact, some as innuendo, but ultimately, readers aren’t wordsmiths and they remember the key themes and elements. Especially since it ran as a series for so long, with the leitmotif being this is a “rogue unit”. These are by and large that this “rogue unit” had:

a) Broken into the home of former President Zuma;
b) Planted listening devices in former President Zuma’s home;
c) Secretly listened into private conversation of former President Zuma;
d) Broken into taxpayers’ homes;
e) Conducted “house infiltrations”;
f) Spied on President Zuma and Leonard Radebe at the Beverly Hills hotel in Durban;
g) Conducted lifestyle audits on prominent politicians – Fikile Mbalula, Julius Malema, Fana Hlongwana, Zizi Kodwa and ANC politicians;
h) Infiltrated politicians and the ANC as bodyguards;
i) Bought new homes and cars;
j) Spied on late, former national police Commissioner Jackie Selebi;
k) Illegally intercepted telecommunications and emails of taxpayers;
l) Unlawfully spied on taxpayers;
m) Was an illegal and unlawful unit;
n) Been denied;
o) Was so secret that nobody had ever heard of them before;
p) Had secret funds of over R 560 million;
q) Operated front companies;
r) Operated a brothel as a front company;
s) Used CCTV to spy on a former and late SARS official Leonard Radebe at a restaurant in Muldersdrift and intercepted his communications;
t) Purchased a list of very sophisticated spy equipment and used this to spy on taxpayers;
u) Tasked a Mr Peega to infiltrate a rhino-poaching syndicate and when he was arrested by the police, “disavowed” him;
v) Received training and bought equipment from a former Apartheid-agent’s (Steven Whitehead) company;
w) Used fake names and ID’s in their work;
x) Entered into questionable settlements with taxpayers e.g. Dave King;
y) Used a crowdfunding charitable fundraiser called Wachizungu as a front of some sorts; and
z) Received questionable donations from suspect donors;
aa) Plotted against former President Zuma;
bb) Was deployed to “destroy careers of SARS officials” specifically Mandisa Mokwena, Leonard Radebe and a Nandi Madiba who were all “tipped” to become SARS Commissioner;
cc) Been involved in the deaths of colleagues namely Leonard Radebe and George Nkadimeng.

a) That I had confessed to Moyane that I ran a “rogue unit”;
b) That the Sikhakhane panel, Kroon Advisory Board and KPMG report “confirmed” the above “stories”;
c) That the unit bugged the DSO and that Lombard and De Waal confessed to this to the Hawks in affidavits “seen” in May 2015
d) That Ivan Pillay faced a “string of charges”;
e) That I was conflicted with Belinda Walter;
f) That the relationship between me and Walter had “rocked SARS” by 10 August 2014;
g) That I was a “former apartheid undercover police agent” (which in SA context means one thing only – Apartheid spy);
h) That Ivan Pillay and I had conspired with Carnilinx for tax leniency to bring action against BAT and Walter and should be forced to “put pen to paper”;
i) Pravin’s pal scored on retirement (Ivan Pillay);
j) I professed to have an MBA to an unnamed journalist;
k) Ivan did not have matric or any post matric qualifications;
l) Yolisa Pikie did not have a degree;
m) Andries Janse van Rensburg blackmailed SARS about Zuma bugging and scored millions and Ivan was involved;
n) Ivan Pillay’s reappointment as acting commissioner was unlawful;
o) Ivan Pillay arranged some sort of meeting as “mastermind” with Tom Moyane at Kgosi Mampuru prison
p) Pete Richer and Ivan Pillay scored millions in some sort of deal to leave SARS;
q) I unlawfully shared taxpayer information with Walter which was a serious crime;
r) Lana Pinkham and Patricia Langa should be investigated and charged for unlawfully disclosing confidential tax information;
s) I had some or other questionable relationship with Pearlie Joubert.

It is now some years later. We know of many who concocted this crap and advanced it. When do we get to see the “evidence” and ear and cross-examine the under oath “testimony” to support these?

And please don’t come with platitudes, oxymorons and “he said, she said” or “I heard that”. Start with each from a) to s), singularly, then show me the evidence.

About Johann van Loggerenberg: Publishing the inside story on SARS

Rogue: The Inside Story of SARS’s Elite Crime-busting Unit 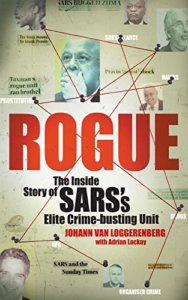 The story of a ‘rogue unit’ operating within the South African Revenue Service (SARS) became entrenched in the public mind following a succession of sensational reports published by the Sunday Times in 2014. The unit, the reports claimed, had carried out a series of illegal spook operations: they had spied on President Jacob Zuma, run a brothel, illegally bought spy ware and entered into unlawful tax settlements.

In a plot of Machiavellian proportions, head of the elite crime‐busting unit Johann van Loggerenberg and many of SARS’s top management were forced to resign. Van Loggerenberg’s select team of investigators, with their impeccable track record of busting high‐level financial fraudsters and nailing tax criminals, lost not only their careers but also their reputations.

Now, in this extraordinary account, they finally get to put the record straight and the rumours to rest: there was no ‘rogue unit’. The public had been deceived, seemingly by powers conspiring to capture SARS for their own ends. Shooting down the allegations he has faced one by one, Van Loggerenberg tells the story of what really happened inside SARS, revealing details of some of the unit’s actual investigations.

Johann van Loggerenberg was a group executive at SARS before he resigned from the tax authority in early 2015 after 16 years’ service.

Adrian Lackay is a former spokesperson for SARS. Before he started at the tax authority in 2003, he worked as a journalist and political correspondent.

Warning. Smoking kills. It also corrupts law-enforcement officials and eviscerates state institutions. It devours politicians, professionals, businesspeople and ordinary workers in the chase for big bucks and the battle for a slice of an ever-shrinking cigarette market. Join one of South Africa’s former tax sleuths Johann van Loggerenberg in a wild ride through the double-dealing world of tobacco’s colourful characters and ruthless corporates. Meet the femme fatales, mavericks, mercenaries and grandmasters, and learn how the crime-busting unit led by Van Loggerenberg at SARS and its ‘Project Honey Badger’ became a victim of a war between industry players and a high-stakes political game driven by state capture. This is the tale of a few good men and women who dared to try to hold to account a billion-dollar international industry rife with private spy networks, tax evasion, collusion and corruption – ultimately at great cost to themselves and South Africa.