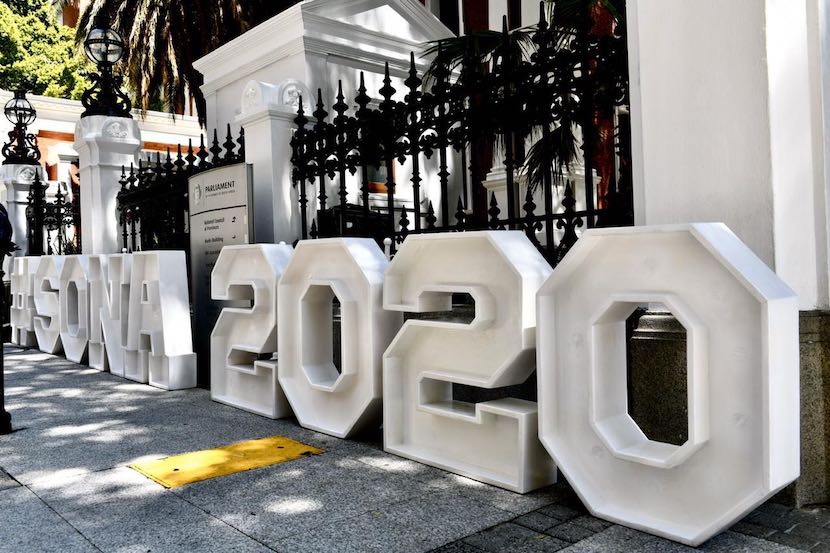 As we were watching the preparations at Parliament for the President’s State of the Nation Address and the stream of photos from the Government Communication and Information System (GCIS); it became clear that President Cyril Ramaphosa was desperate to put a positive spin to his message despite the doom and gloom that hangs over South Africa with Eskom blackouts, corruption and a failing economy. And he is calling in the big guns, the pretty ones and the youth to back him up. A big statute of Nelson Mandela dominates at the entrance to the National Assembly, gigantic letters spelling out SONA2020, huge posters with quotes of Madiba and a big banner depicting Mandela holding Winnie’s hand when he was released from prison, are on display. It is after all 30 years after the world’s most famous prisoner was released from Robben Island. Also, in Cape Town, Ramaphosa met a 17 year old pupil Sinoyolo Quma who ‘contributed to the President’s speech’ and released pictures of our own Miss Universe Zozibini Tunzi on a bus tour and a video titled ‘Uniting for a better South Africa’. The beauty of Cape Town and it has put its best weather forward for the day, was not lost on Simon Lincoln Reader who is in the Mother City, but it did not help to hide his disgust for the politicians in their finery. “The real state of the nation”, Reader writes, “took place last Friday, at Cape Town stadium, where over 51 000+ people attended a tennis match” and he provides an alternative version of SONA which he thinks is more appropriate for the occasion. – Linda van Tilburg

SLR: An honest State of the Nation Address – what Cyril should say

“Various Zimbabwean warlords, various officials from various African countries, nobody too significant obviously, such is the view of South Africa on the continent.

“Tonight is the chief annual relapse of our addiction to celebration: every year we spend millions on this evening, money we don’t actually have at present, but in the unlikely event we do, would be better spent elsewhere. However, if the random Ethiopian guy from the embassy who shreds diplomatic cables can accept an invitation, maybe impress a date – it’s the appearance of solidarity with our brothers, despite the fact they hate us for good reason. So, welcome. 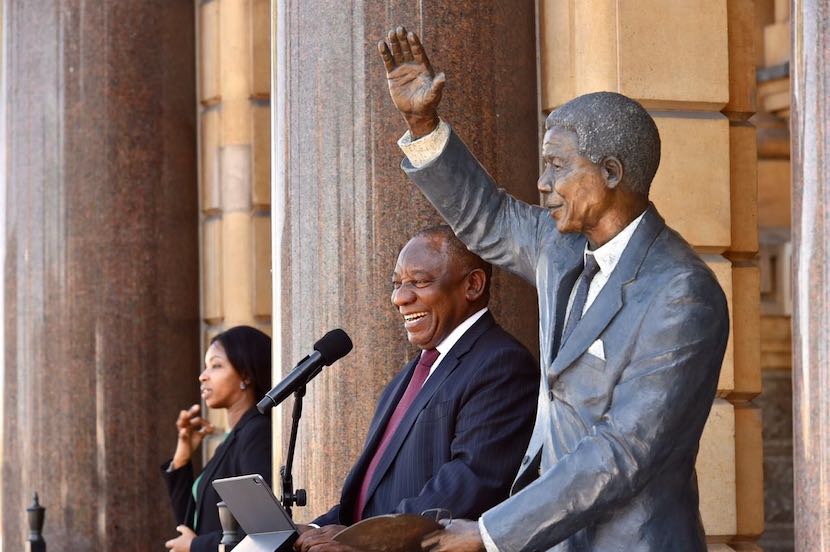 “We’ve become the party that never dismisses an opportunity to make complete jerks of ourselves. Who could forget the clown who thought it would be a good idea to rock up in military regalia, not realising that he had positioned the insignia arse about face? (its actually a criminal offence) Or that idiot Malusi, wearing an SAA pilot’s hat – that worked out well didn’t it? So for all you maladroit, breathtakingly arrogant, partial or full blown criminals who’ve spent thousands on the work of obscure but effete designers, usually with Afrikaans surnames, well, well done – the grandmother’s looking after their grandchildren because the parents have died from Aids, or been slaughtered, those carrying buckets of water on their heads or wretchedly stirring pots of maize on open fires – they are WELL impressed with you.

“In particular, I’d like to welcome those implicated or soon to be implicated through the Zondo Commission of Inquiry. Faith, Ace, Mosebibi (see what I did there huh?) and others. Dirty, bent, hopeless, inchoate, painting-stealing but most importantly, unbothered. No apologies, no resignations in disgrace –  no “look-I cannot-live-with-my-conscience-for-what-I-have-done-in-Jacobs-name-so-I-will-resign-and-report-to-the-nearest-police-station” here. The wider “Radical Economic Transformation” grouping are here too – obviously without your resident mad cow Busisiwe. Congratulations on your 50th Birthday by the way – you don’t look a day over 80. Also absent is the head of Ekurhuleni’s Association of Blithering Idiots, Mzwandile Masina, who recently claimed he was ready to go to jail for Zuma. I would very much like to make that happen for him.

“Now would be an opportune moment to invite some racist, red-bereted shithead to call for Pravin Gordhan’s removal, probably by using his middle name ‘Jamnadas’ as doing so makes Pravin sound turbo-Indian and the EFF hates Indians, or rather, Indians unwilling to bankroll it.

“For those seeking facts tonight, very much a minority, I’ll give them this one: one of the largest groups of South Africans leaving the country are…black professionals. That’s right. We couldn’t even last three decades – three decades – before the people in whose name we once resisted grew tired of and icily rejected us. All that invested faith – gone. And why? ‘Irregular procurement’,; ‘suspended – but on full pay’; ‘part of a wider conspiracy’’; ‘disciplinary hearing’ and all the other events that always, always emerge the moment a state-owned enterprise drops its guts onto our doorsteps, which seems to happen every morning.

“Actually, we’re almost week late. The real state of the nation took place last Friday, at Cape Town stadium, where over 51 000+ people attended a tennis match. Those 51000+ people and their extensions from all over the country have money, resources, who employ but most importantly, love their country and their hero Siyamthanda Kolisi. You see, he does something we are incapable of doing. He delivers, makes people feel like they can do anything.

Left to these 51000 people to determine the country’s policies, those buckets would fly off the shoulders of grandmothers – alone they would build a nation state Britain would be jealous of. There was more talent and more principled leadership in that stadium than in London.

“Finally, there is a perception that I am a coward. I admit to this. I’ve said some really stupid things, and quite frankly, this party’s glory days are behind it. We’re in a war – on my side, we have some relatively sensible people, but our adversaries are much better at being bad than we are at being good.

“So drink up on the taxpayer’s account, and exaggerate our ‘movement’ as if it has any relevance or influence in the country or indeed the world anymore. A word of advise whilst doing so: don’t cheer the real struggle heroes, the blacks, whites and Indians who actually accomplished the very thing so many of you foul just by your presence here tonight. Both the dead and the alive of this history loathe you.

“Tonight the curse of loadshedding becomes my great blessing. The address has therefore not been broadcast because there was no power to do so with.”