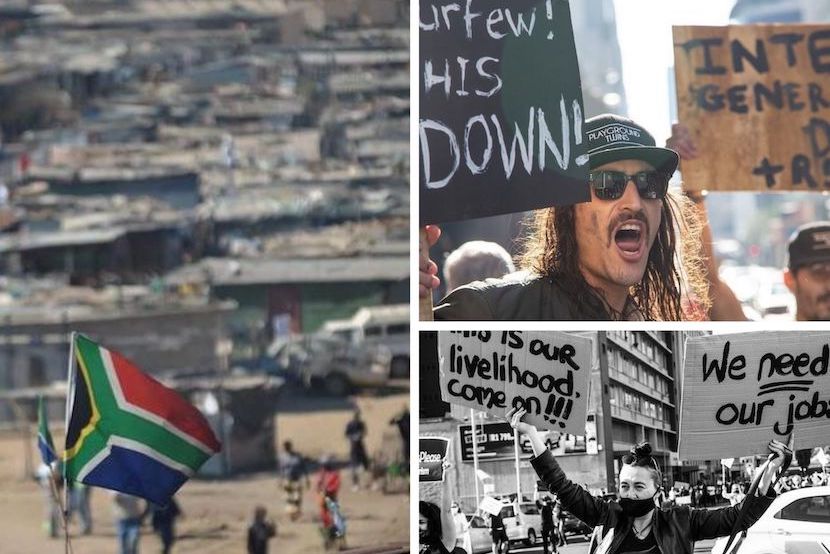 While it’s true that each year comes with its own trials, triumphs and tribulations, it feels as though 2020 really did a number on us. From a deadly pandemic hitting our South African shores, to watching in horror as Donald Trump and Joe Biden verbally attacked each other like children in front of the globe, we’ve probably seen it all. Sometimes all one can do is take to social media for a laugh or to vent, and our BizNews community never disappoints.  – Claire Badenhorst

Here are just 12 of the times when 2020 either surprised us or gave us the middle finger.

1. When Covid first reared its ugly head in Sub-Saharan Africa and we knew so little about it.

Remember those early days when you were too afraid to cough for fear of being tackled by your colleagues?

Commenting on a BizNews article, shotofhealth said, “Whatever ‘COVID’ is, IT’S NOT WORTH DESTROYING OUR ECONOMY FOR!!! And never, ever before has the world shut down for a circulating virus. It is INSANITY. Isolating people from people is also INSANE. All it does is LOWER OUR IMMUNITY. WAKE UP PEOPLE!!”

ExAfricaSemperAliquidStultum had a more sinister view. “There is no ‘Covid-19’. It is Chinese Communist Party Biowarfare lab Wuhan virus. Yes, the same communist party that owns South Africa and Marikana Cyril.”

2. Then it was announced that South Africa would be entering a three-week lockdown.

Of course, the initial lockdown got extended – again and again – and hand sanitizer soon became the world’s hottest commodity. South Africans started baking banana bread like it was going out of fashion, and as a result, there was a shortage of everything from yeast to baking powder. South Africa had some dark days, though, with alcohol and cigarette sales being banned for several months, resulting in the loss of thousands of jobs and sparking an illicit tobacco trade boom.

#alcoholban
We at the point where the government needs to open everything and people must learn to take care of themselves. All the information about covid is provided. Our economy won’t survive this lockdown. More people will suffer. Open all industries

3. The state put aside R500bn to help fight the spread of the virus, only to have it stolen.

Remember when we had to deal with corruption cases surrounding the purchase and supply of PPE? In July, President Cyril Ramaphosa committed to taking a hands-on approach in the battle against theft and graft related to Covid-19 funds and price gouging. We finally started seeing some results in October when the Hawks and the NPA arrested over 100 people in a corruption crackdown.

“The sheer quantity of the arrests and money siphoned off is staggering; it shows the complete shamelessness of it all,” Cynic-optimist lamented. “It is frightening to think this is the tip of the iceberg. Systemic rot. Still this is an encouraging sign, and the right direction. But it will mean nothing if 1. there are no convictions and 2. the looting and culture of self-enrichment is not eradicated and self-serving cadres are not replaced with competent civil servants. I am not confident about the former and frankly hopeless about the latter.”

“These arrests are welcome, but convictions are an entirely different matter, so far not achieved,” agreed Geoff Smailes.

This is but a minuscule drop in the ocean of grand scale corruption that’s forsaken the country !

4. The ANC and its countless attempts to resuscitate South African Airways.

The troubled airline has been grounded since March 2020 when the country went into lockdown. The state-owned enterprise has been guzzling taxpayers’ money for over a decade and yet, in October, finance minister Tito Mboweni approved another R10.5bn bailout for SAA. The government recently announced that it may sell shares in SAA once the carrier has been resuscitated.

“Who is smoking mountain cabbage here? As long as the ANC, or any politician is anywhere near this, it will be loss making. They can’t supply schools with toilets, never mind run an airline. Anyone ever ask why they, the ANC, are so fixated with this damn airline?” asks Simon the Sowetan.

not surprised – they would rather have #saa https://t.co/BZ4axO2uqW

5. When South Africans had enough and took to the streets to protest against farm murders.

No Farmers, no food! Where is the protection from the ANC Government? #VoetsekANC #VoetsekCELE.

“The ANC and the EFF should change their war cry ‘Kill a Farmer, kill a Taxpayer’”. If taxpayers are not getting killed in this country, they emigrate. #voertsekANC will have to be more creative to generate more WTF (white taxpayer funds) from the remaining few,” says Morena Zwekwati.

6. The US election race which was both alarming and entertaining.

It’s common knowledge that ‘when America sneezes, the world catches a cold’ – naturally, the globe had a vested interest in the results of the US election. Whichever side of the fence you’re on, this was, without doubt, one of the most closely watched moments in history.

In October, the president revealed an ambitious post-Covid-19 recovery plan which aims to generate 800,000 job opportunities. The plan detailed four interventions which included a massive roll-out of infrastructure throughout the country, the rapid expansion of energy generation capacity to secure reliable energy within two years, an employment stimulus aimed at creating jobs and a drive for industrial growth.

Graham responded with, “Eish. Sounds like blood letting to fix an anemic patient to me!”

We lost 2.2million jobs in a space of 6months,you come on national TV you are telling us you will only create 800.000 jobs like really

Not only did she reveal the identity of a state capture witness and refuse to answer any questions, but she also admitted lying about her degree to a chorus of angry chants.

Did she really think nobody would notice…? An insult to all who have achieved degrees legitimally.

“This is why international investors stay away – they prefer more market-friendly economies as opposed to a banana affair,” comments Shane Sutton.

#DuduMyeni #soes “Dudu” is of Swahili origin and means “Insect” …. no further comment.

9. The time when an arrest warrant was finally issued for Secretary-General Ace Magashule.

Rumours circulated that Magashule could face arrest as the Hawks and National Prosecuting Authority (NPA) apprehended several suspects involved in an asbestos housing project in the Free State. The housing scandal happened on Magashule’s watch as he was premier of the Free State when a tender for R255m was awarded to Blackhead Consulting in 2014, a company owned by businessman Edwin Sodi. Several ANC officials were arrested, including Olly Mlameli and Tim Nthimotse.

“Don’t discount the possibility that the NPA brings a weak (calculated) case against Ace, and that he comes out with shining colours,” wrote a dismayed Andre Moore.

10. The day when Jacob Zuma walked out of the Zondo Commission.

After insisting that Judge Ray Zondo recuse himself from the state capture inquiry, the former president eventually made an appearance. Not only did he submit a 102-page affidavit that claimed how he and Zondo were actually friends, but he also walked out of the inquiry without excusing himself. The Zondo Commission’s secretary, Professor Itumeleng Mosala, has filed an application at the Constitutional Court to have Zuma summonsed to testify in January and February next year.

A friend…..who is biased against you and must recurse himself ???

Movingthegorgonzolaback said, “You simply cannot make this sh1t up! How can someone who was captain of the ship when it hit the rocks still be having such an impact on our lives? From his side he has to crash the commission. May the force be with you judge raymond as you craft your decision. No wriggle room! He is a good wriggler!”

“Storms out” is a bit dramatic. He slunk away, coward that he is, much like Scar from The Lion King.

Zuma plays this country like a fiddle… good for him pic.twitter.com/DsLR3ME34J

11. We watched in disbelief as South Africa plunged deeper into junk territory.

Moody’s Investors Service joined Fitch Ratings in lowering the South Africa’s credit ratings to a level worse than in 1994.

SA will never wake-up! The End.

This time they just dropped our country into the dirt bin. Next downgrade drops us into the pit toilets. When are we going to vote the clowns out who brought this shame on us? 🇿🇦

12. The time when the Democratic Alliance released a list of former government officials and politicians who have been flying on taxpayers’ backs for the past two years.

The exposé revealed that about R10m is used each year to pay for luxury flights for former ministers, deputies and their spouses, all courtesy of long-suffering South African taxpayers.

Reasons to keep a state airline afloat? Any other airline would want these tickets paid for ….. with real money ……

Ok so now this is al public – do any of these people realize why the marginalized people of SA are gatvol? And Nogal they’ve got vokal shame 😡 the parliamentary handbook needs to change ASAP!

And the government wonders why there’s a taxpayer revolt happening…it’s because our money doesn’t go to educating and housing the poor, but cushioning ANC cadres’ retirement.

There were many more moments in 2020 that made us shake in our boots, and as we head towards the end of this gruelling year, all we can ask is this: