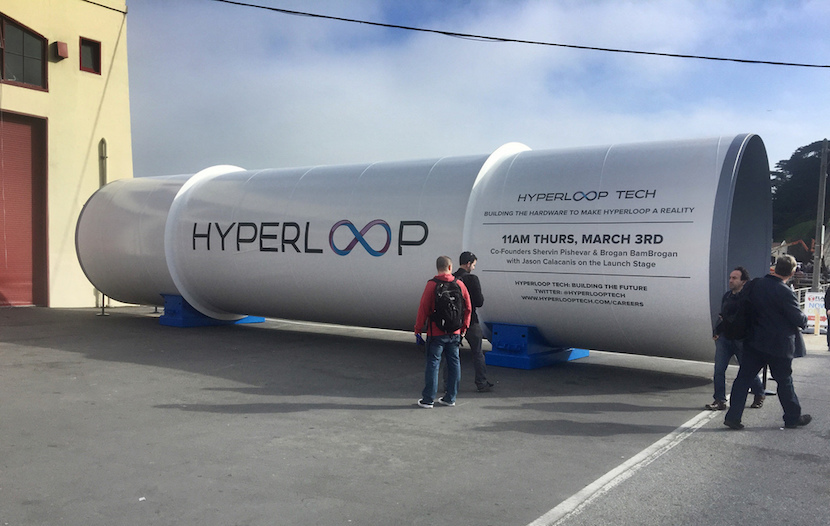 While Elon Musk’s first Russian venture may have ended in disappointment, the Bloomberg story below suggests that connection is about to strengthen. On his first visit to the Kremlin, the SpaceX founder was going in search of space rockets, he was turned away. But since the South African-born entrepreneur proposed the new Hyperloop mode of transport in 2013, Russia has emerged as key investors, with President Vladimir Putin amomg the interested parties. And much of the $100m Musk has raised has come from Russian freight tycoon Ziyavudin Magomedov, while other investors include the Kremlin’s Russian Direct Investment Fund, and French rail operator SNCF. The Russians were the first to space with the Sputnik and one wonders if this will be another race they are set to win. One things for sure, Musk has an admirer in Putin, who says the technology will reshape the global economy. Musk’s goal is to have everything complete by 2020, the Russians say it can be done sooner. – Stuart Lowman

by Ilya Khrennikov and Stepan Kravchenko

(Bloomberg) — A brash dot-com millionaire showed up in Russia shopping for a rocket at the start of Vladimir Putin’s presidency, only to be derided as a crank by smug apparatchiks who plied him with vodka before waving him away.

Nobody in Moscow is laughing at Elon Musk any more.

Since Musk proposed a new mode of transport in 2013 — his trademarked Hyperloop network of levitating pods that zip through tubes at breakneck speed — Russia has emerged as a key investor in its development. And Putin, who’s built pipelines of his own, pledged to champion the technology during talks last month at his annual forum in St. Petersburg with Shervin Pishevar, a Musk ally and early Uber investor who co-founded U.S. startup Hyperloop One.

“He expressed big interest in this project and promised state backing for implementing it,” Putin’s spokesman, Dmitry Peskov, said in a text message.

Hyperloop One is one of at least two companies racing to realize Musk’s futuristic dream of transforming the way goods and people move across the earth. Much of the $100 million it has raised so far has come from Russian freight tycoon Ziyavudin Magomedov, who co-owns ports in the Far East and on the Black and Baltic seas. Other investors include the Kremlin’s Russian Direct Investment Fund, and French rail operator SNCF, but not Musk himself.

Los Angeles-based Hyperloop One already has feasibility studies under way with Russia and at least two other European countries, as well as partnerships with leading designers such as Deutsche Bahn Engineering & Consulting. In May, it conducted a proof-of-concept test in the Nevada desert, accelerating a cart on metal rails from zero to 116 miles per hour (187 kph) in just 1.1 seconds.

But huge hurdles remain for the company to meet its goal of starting commercial operations by 2020. Its next target is to present a working prototype of a complete, near-vacuum system of tube, magnetic track and sled by January. If successful, the company would then focus on improving its propulsion technology, which is based on linear induction motors and air compressors, to achieve higher speeds while ensuring safety and comfort.

And then there are the costs.

In his initial, open-source proposal, Musk predicted that a 400-mile Hyperloop could slash travel time between Los Angeles and San Francisco to 35 minutes and be built for as little as $6 billion, or $15 million a mile.

Read also: MUST WATCH: The transport revolution – from Musk’s ‘Sandshark’ to 007 jetpacks

But officials in Moscow think they can build one for less. The Transportation Ministry, together with Hyperloop One and Magomedov’s Summa Group, signed an accord at the St. Petersburg forum to study building a 44-mile link connecting China’s Jilin province to Summa’s port of Zarubino on the Sea of Japan for as little as 30 billion rubles ($460 million) by as early as 2020.

“The Russians were first to space with Sputnik and could be first again to transonic travel,” Hyperloop One Vice President Bruce Upbin said in a blog.

Transport Minister Maxim Sokolov told state television that the $2 billion Russia-China Investment Fund, a venture between the two governments, will probably help finance the first Russian Hyperloop with an eye toward using the technology more widely in China’s New Silk Road initiative to expand trade routes to Europe through Russia and Central Asia.

Putin is increasingly turning to China for investment as Russia struggles through a second year of a recession that was triggered by plunging oil prices and made worse by a trade war with the European Union over Ukraine.

The Russian leader visited China last month for the fourth time since Xi Jinping became president in 2013 and the two sides signed more than 30 cooperation accords in areas such as energy, agriculture and infrastructure, including a high-speed rail link between Moscow and Kazan that may cost $15 billion.

Hyperloop one is planning a 300-mile route that goes underwater https://t.co/8AptwDXsi9 pic.twitter.com/pCnlAHF0vL

Russia, which stretches across 11 time zones, sees enormous benefits to slashing travel times, particularly along the Trans-Siberian, which already offers a cheaper and shorter, though slow, alternative to sending goods between Asia and Europe by ship. The average speed of Russian cargo trains is just 16 kilometers per hour, a fraction of what China achieves.

“Through our investment in Hyperloop we will help revolutionize transportation and logistics,” William Shor, who runs Summa Group’s investment arm, Caspian Venture Capital, said in an interview in Moscow.

In St. Petersburg, Hyperloop One’s Pishevar, the Iranian-born co-founder of Sherpa Capital in Silicon Valley, also signed agreements with Summa and the city of Moscow to explore connecting its major airports with downtown.

After his meeting on innovation with Putin on June 16, Pishevar posted a photo on his Facebook page of all the officials and investors in the room, which he said included the heads of 18 sovereign wealth funds. The venture capitalist said the Russian leader wrapped up the session by offering this assessment: