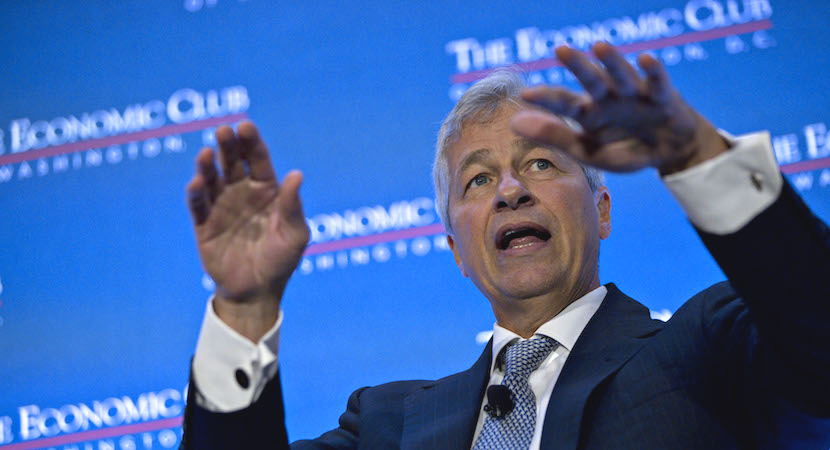 JOHANNESBURG — Cryptocurrency Bitcoin has grabbed a lot of interest this year as it’s surpassed record price levels. As it’s sailed past the $4000 mark, the currency has started to go mainstream. But not everybody is on board. Respected JPMorgan CEO Jamie Dimon has hit out at the cryptocurrency craze, slamming it for having no value and no security. His comments are sure to spark heated debate. The cryptocurrency market, because of its decentralised nature, seeks to escape traditional regulation by design. This can help, for example, by bringing down costs for transferring money across borders. But this model has also spurred on a Wild West attitude with criminals and pump and dump schemes. There’s no doubt that there’s huge risk behind Bitcoin and that it’s experiencing a massive bubble, but the reality is that its underlying blockchain technology and the benefits thereof are hard too ignore as well. – Gareth van Zyl

The cryptocurrency “won’t end well,” he told an investor conference in New York on Tuesday, predicting it will eventually blow up. “It’s a fraud” and “worse than tulip bulbs.”

If a JPMorgan trader began trading in bitcoin, he said, “I’d fire them in a second. For two reasons: It’s against our rules, and they’re stupid. And both are dangerous.”

Bitcoin has soared in recent months, spurred by greater acceptance of the blockchain technology that underpins the exchange method and optimism that faster transaction times will encourage broader use of the cryptocurrency. Prices have climbed more than four-fold this year — a run that has drawn debate over whether that’s a bubble.

Bitcoin initially slipped after Dimon’s remarks. It was down as much as 2.7 percent before recovering. Last week, it slumped after reports that China plans to ban trading of virtual currencies on domestic exchanges, dealing another blow to the $150 billion cryptocurrency market.

jamie dimon just called Bitcoin a fraud, hmm…its almost as if Bitcoin made predatory home loans then got a bailout and never went to jail

Tulips are a reference to the mania that swept Holland in the 17th century, with speculators driving up prices of virtually worthless tulip bulbs to exorbitant levels. That didn’t end well.

In bitcoin’s case, Dimon said he’s skeptical authorities will allow a currency to exist without state oversight, especially if something goes wrong. “Someone’s going to get killed and then the government’s going to come down,” he said. “You just saw in China, governments like to control their money supply.”

Dimon differentiated between the bitcoin currency and the underlying blockchain technology, which he said can be useful. Still, he said banks’ application of blockchain “won’t be overnight.”

The bank chief said he wouldn’t short bitcoin because there’s no telling how high it will go before it collapses. The best argument he’s heard, he said, is that it can be useful to people in places with no other options — so long as the supply of coins doesn’t surge.

Jamie Dimon: Bitcoin makes sense if you live in Venezuela or North Korea, or if you are a drug dealer or murderer.

“If you were in Venezuela or Ecuador or North Korea or a bunch of parts like that, or if you were a drug dealer, a murderer, stuff like that, you are better off doing it in bitcoin than U.S. dollars,” he said. “So there may be a market for that, but it’d be a limited market.”

To be sure, Dimon later noted that his daughter purchased some bitcoin.

“It’s interesting that somebody with that high profile of the establishment is out there with that bold statement,” Jeffrey Gundlach, chief investment officer of DoubleLine Capital, said on a webcast Tuesday after Dimon’s remarks.

Gundlach said he doesn’t have a view on bitcoin but that he’s concerned it may be more vulnerable to manipulation than enthusiasts admit. “Maybe I’m just too old, but I’m going to let this mania go on without me.”

One place where cryptocurrencies and traditional finance are coming together is at CBOE Holdings Inc., the owner of the Chicago Board Options Exchange. Last month, the firm teamed up with Gemini Trust Co. — the startup created by the Winklevoss twins made famous by the 2010 Facebook film “The Social Network” — with a plan to offer bitcoin futures.

“Like it or not, people want exposure to bitcoin,” Tilly said. Believers can bet on its rise, and Dimon is welcome to take the other side, he said. “We’re happy to be the ones in the middle.”