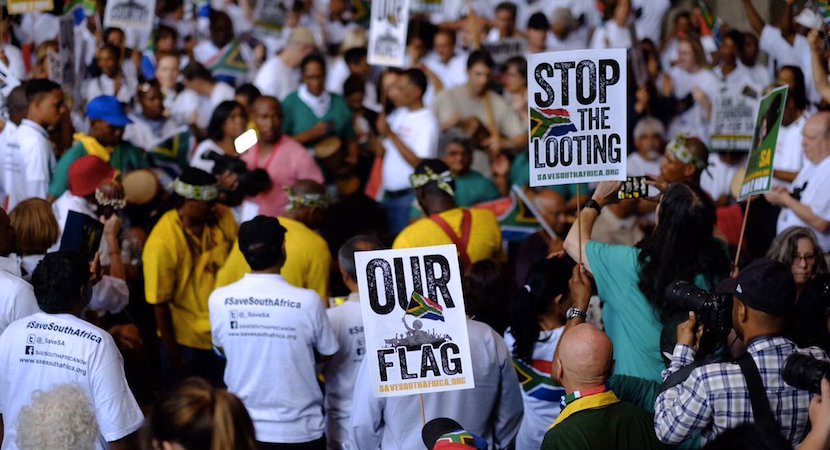 CAPE TOWN — The globally influential Financial Times of London this week devoted an editorial to South Africa’s State Capture with a defining line, which if the mass democratic reform alliance succeeds, could explain why the ANC may perish in 2019. Seemingly banal but powerfully accurate, it is this; “patronage networks have become central to the ruling African National Congress’s raison d’être.” Put simply, the ANC has supplanted the original reason for its existence with an unsustainable one. Why else would Jacob Zuma survive eight votes of no confidence, a weighty criminal probe against him and telling observations by a slew of judges as decision after decision goes against the Zuptoids on the new legal battlefront? His corrupted party has reshaped ‘the struggle’ into fending off a growing army of domestic and global enemies, outraged by their looting of the State purse. The FT editorial urges South Africa to quickly imitate Brazil and South Korea in fighting corruption – or face State failure ala-Venezuela. It warns corporates turning a blind eye to graft or those tempted to just ‘get along,’ that there is a point at which “adjusting to local conditions” enables corruption. The FT calls for Western jurisdictions to clamp down corporate complicity in SA – just as Investec this week reviews its relationship with a historically graft-enabling KPMG, possibly joining several others who’ve ditched them. Others are introspecting. Becoming an untouchable is easy – do business with the Zuptoids. – Chris Bateman

Nobody has risen above the law in Brazil and South Korea, not even presidents, yet South Africa continues to court State failure by harnessing public resources for private ends, opines the globally influential Financial Times in an editorial this week.

By wisely focussing on the reputational vulnerability of international firms such as Bell Pottinger, KPMG and McKinsey, the activists have had considerable success, even if the Zuptoids and their captured state institutions seem to remain unaccountable.

Bemoaning the loss of South Africa’s post-apartheid lustre and its descent into being compared by international business people to Venezuela, the FT wonders how much further we can descend into the looting and rent extraction that has ruined so many other African states. Listing the familiar landmarks of SA’s descent under Zuma, it says we are more divided and frustrated than at any time in since the dawn of black majority rule in 1994.

Labelling the situation, a “slow burning disaster,” that becomes more explosive the longer it goes on, the editorial says any residual credibility Zuma may have had after the arms deal charges were dropped have now been stripped away by controversy after controversy.

Patronage networks are central to the ruling ANC’s raison d’être, with graft infecting all levels of the State. In a prescient description, it says that for some businesses, the temptation is to go along, to get along.

However, it adds, there’s a point at which adjusting to local conditions risks enabling corruption. The editorial cites Bell Pottinger “overstepping the mark,” with its racially divisive campaign to support the Guptas, and its subsequent collapse – and describes KPMG’s case as “equally questionable.”

Instead of doing what external auditors do; certifying basic standards of corporate governance, KPMG did the opposite. It turned a blind eye to the use of public funds to pay for a private wedding and neglected to raise the alarm over nefarious activities of Gupta-linked business.

The editorial calls for western jurisdictions to exert pressure by holding those companies who have transgressed the law in South Africa to account. While Zuma may have already stacked the system sufficiently to ensure his kind remain in power, those sparks of resistance still burning should be encouraged – if South Africa is to avoid a descent into despotism, it concludes.