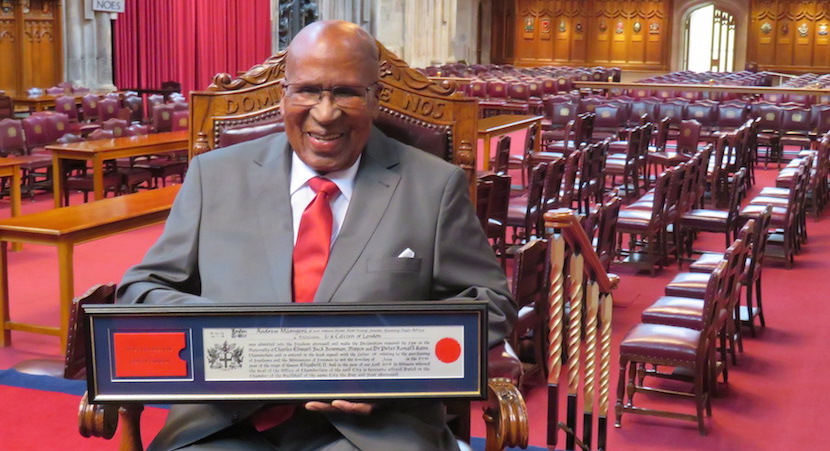 CAPE TOWN — The belated granting of London’s prestigious Freedom of the City to the 93-year-old Rivonia trialist and struggle stalwart, Andrew Mlangeni last week has inspired forensic investigator and bane of the Zuptoids, Paul O’Sullivan to redouble his efforts to bring to book the sell-outs of the ANC’s evergreen core democratic values. Here he shares how attending the ceremony to honour Mlangeni in his adoptive city helped him realise how relatively minor his kidnapping and torture by Zuptoid apparatchiks in more recent times was, in comparison with the hounding, capture and lengthy imprisonment of the Rivonia trialists. More importantly, Mlangeni’s dignified, rational and humble behaviour has inspired O’Sullivan to keep his shoulder to the anti-corruption grindstone and help reformists in South Africa rid the country of the scourge of corruption, theft and greed that dominated the past decade. He reminds readers that he and like-minded patriots are determined to stop the counter-revolutionaries in their tracks, no matter how much sway they may still hold in government. Mlangeni is among those who’ve warned that expropriation of land without compensation requires a velvet glove to avoid alienation and a return to widespread hostility along racial lines. – Chris Bateman

If only more South Africans could be like Andrew Mlangeni. If only.

At age 93 years, he is an example to all of us. I had the greatest pleasure to spend time with him last week, not once, but twice. What an absolute gentleman he is. Having spent 26 years and four months in prison, he is one of the last two surviving members of the Rivonia Treason Trial.

Like his comrade, the late great Nelson Mandela, he carries no bitterness for his lost 27 years.

I was part of a small group of people that had the honour to watch Andrew receive the Freedom of the City of London. An honour bestowed upon him with others (now passed) in 2016, but he was not up to the journey then. His comrade Nelson Mandela stood in the same room 20 years earlier in 1996.

Despite his senior years, Andrew flew into London on Monday last week, to face a gruelling schedule. On Tuesday he attended the South Bank Centre in Waterloo, London, for the launch of the Nelson Mandela Centenary Exhibition and was hosted by Lord Peter Hain and also met and shook hands with the Duke & Duchess of Sussex, Prince Harry and Meghan. He’s flying home to South Africa today and he had plans on Saturday to take in a round of golf at Wentworth. I am told he plays golf every week, but he would not tell me what his handicap was.

When Andrew Mlangeni received his Freedom of the City of London, he showed his style and maturity during his acceptance speech, when he thanked the people of London for hosting his comrade Oliver Tambo, from 1960 for 30 years in exile. Oliver Tambo’s daughter Nomatemba “Thembi” Tambo, was on hand to witness the auspicious occasion. Thembi Tambo is the current High Commissioner of South Africa in London. Not a word from Andrew’s lips of the more than 26 years he spent in prison, as part of the struggle to win democracy for South Africa. Such is the humbleness of the man.

It is because of people like Andrew and his Comrade Nelson Mandela and all those that gave so much for democracy and freedom, that I realised that the twice I was unlawfully kidnapped by criminals with badges, and unlawfully detained and tortured for four days, is nothing. If they can endure 27 years of hardship, what is a few days? I also realised I cannot and will not give up, until the counter-revolutionaries that tried to steal our country and destroy the Rivonia Trialists’ legacy have been stopped in their tracks and brought to justice.

Two years ago, I was very much on the back foot. Today, I along with many others that have stepped forward to stop these criminals from stealing our country, can now smell victory. However, we cannot give up, we must not rest on our laurels, whilst there is still work to be done, or the evil forces of state capture will return with a vengeance.

Until the Hogan Lovells, McKinsey’s, KPMG’s and SAP’s of the world have been brought to book and the criminal justice system has been uncaptured, I undertake not to take my foot off the gas. I gave that undertaking to Andrew in London and I will continue to commit myself to exposing these criminals and bringing them to justice, until the war has been won. I will do this for Andrew Mlangeni, for Nelson Mandela and for all those that made the supreme sacrifice to make South Africa a great country for all.