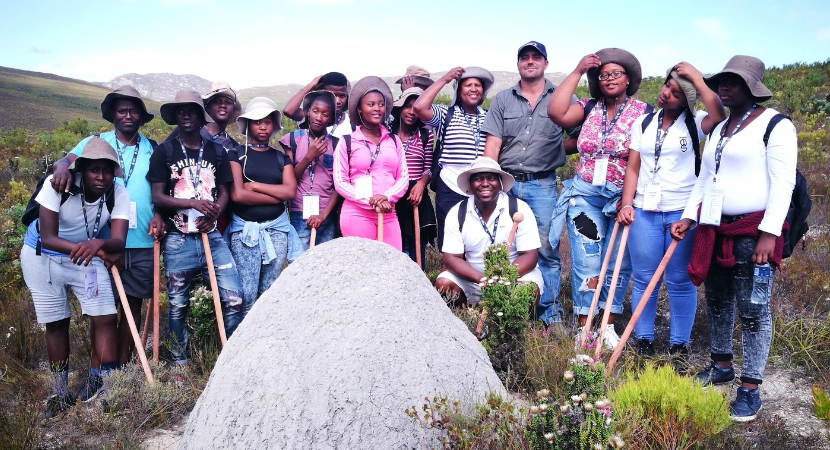 JOHANNESBURG — Peter Gent is a former veteran of the banking world having occupied top roles at RMB, including the bank’s head of project finance. These days he’s in a very different role as Head of Sales and Marketing at NGO Columba Leadership. This NGO is doing incredibly valuable work by running leadership programmes at schools located in economically disadvantaged areas in several provinces around the country. In this interview, Gent tells us about the impact that Columba is having on young people’s lives. – Gareth van Zyl

It’s a pleasure to welcome Peter Gent from Columba Leadership, an NGO which is helping to turn around troubled schools by putting the teachers and teenage students through a three-year leadership and values programme. Peter, thanks for joining me on the podcast.

So, before we get into the details of this program can you tell us more about what Columba Leadership does?

Columba Leadership is an organisation which sees the future of this country in the hands of the young people. We see young people as the potential creators of a country and a future that we would all like to be part of, as opposed to many people who see young people as a problem to be solved. I think this is particularly true in the education sector, where we think the greatest un-utilised asset in the country is, in fact, the learners. So, we engage with senior schools, typically in underprivileged communities, and we seek to give young people the opportunity to actually voice their views, their ideas, and more importantly, give them the confidence to do so and create an environment within schools where their input is welcome. So, we really promote partnerships between the learners and the teachers and the headmaster in jointly coming up with ways to address the problems that face that particular school and that particular community.

You are a banking veteran having spent many years at RMB where you were the COO. So, what attracted you to Columba Leadership and to doing what you’re doing now?

Gareth, I’m a huge believer that greatness exists within every individual and that is absolutely the basis that Columba works on. What really attracted me is that I think value-based leadership is a very powerful way to transform organisations and transform societies. If we can agree on a set of values then every decision we make can be guided by that value system. That happens within a corporate environment and, equally, it happens within a school environment. Equally, it happens within a society as well. So, I think the Columba approach really resonated with me.

You also get top execs and business people involved. But interestingly, I believe that they also end up learning a lot from the learners themselves. Can you tell us more about that?

Our programme is an ‘action learning program’ where young people, in conjunction with their teachers, actually identify, plan and implement projects at the school. But to kick that initiative off we run a six-day residential academy, an off-site academy where we select 12 learners and three educators, typically including the headmaster from the school that we are working with. Most importantly we don’t look for the top performers. We look for a range of kids, sometimes the quiet ones who you never hear from, sometimes the under performers, sometimes the troublemakers but we really want to give the message to all the kids in the school that this is not just for academic performers. Every young person has the ability to be a leader if they choose to be so. We run that six-day academy; it’s a very experiential academy. We don’t try to tell people what their value should be. We rather let them explore the meaning of different values and align it to their own circumstances and their own position. What we have found and what we offer our funders is they can send up to four of their management team on that academy and the feedback we have got is amazing because when you hear the challenges that these young people face on a daily basis, you suddenly realise that the issues of corporate politics are really rather trivial and you start to put into perspective what it means to lead, what it means to overcome challenges, what it means to actually motivate and engage with your fellow employee, or your fellow schoolmates.

How do you measure the results and success of this programme because leadership  is quite an intangible concept?

I think that’s one of our biggest challenges. We are absolutely adamant that we must measure impact. We think it’s absolutely critical. But the issue is that the challenges that are addressed are defined by the young people themselves. So, they will vary from school to school. There are many common themes. Issues such as bullying, poor sanitation, poor nutrition, poor academic performance, gangsterism, teenage pregnancy – these are fairly endemic problems across our education system, and problems, to be honest, that the system has been struggling to address for many years. What we see is that young people come up with projects and programmes that have a remarkable level of impact. One of the key measures is keeping kids in school. You may be aware that SA schools have a very high dropout rate and between Grade 10-12 that’s a particularly serious problem. Amongst the Columba graduates, we’ve managed to reduce that dropout rate to below 10%, as opposed to something of the order of 50% that one sees in the system as a whole. The second statistic we are particularly proud of is that there is this terrible situation where 50% of kids six months out of school, are doing nothing. Stats show that 75% of our graduates are involved either in tertiary education or in formal employment, or they are entrepreneurs who serve their community in one way or another. So, I think one really sees the direction and the initiative that can be released within young people if only they are given the chance.

Peter, for anybody who is listening to or reading this, how can they get involved?

Gareth, we fund ourselves completely from donations. We rely on corporate donations, large philanthropic institutions and high net-worth individuals who are all funders of our programme. So, I think to be honest, first and foremost, that is our major requirement. We have many more schools applying for our program than we have the funds to run programmes. We have been running for 10 years. We have engaged with some 200 schools in seven provinces around the country. So, we are a national organisation. I think anyone looking to contribute to Columba, the website address is www.columba.org.za and all our contact details are there.

Great, thank you Peter Gent for chatting with me today.