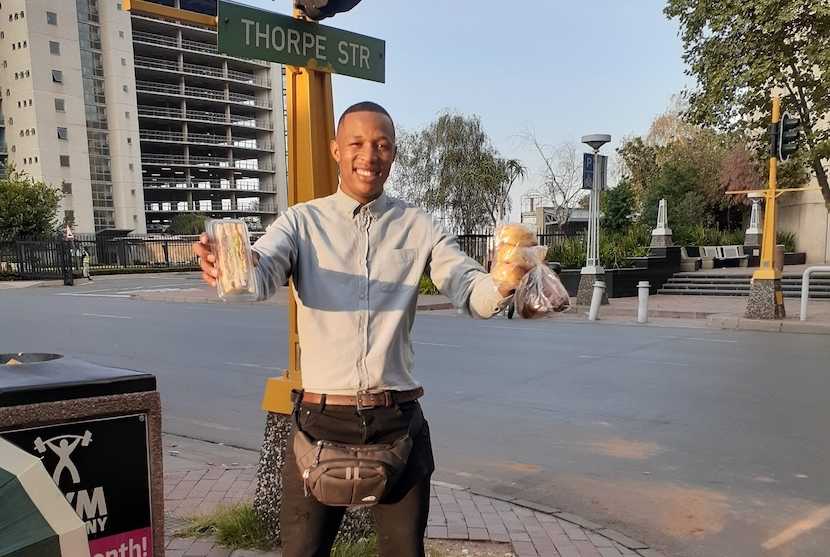 The official unemployment rate in South Africa increased to 29.1% in the third quarter of 2019; from a rate of 27.5% the year before. Even if there are researchers who say that the statistics are not fit for purpose and do not capture what is really going on in South Africa; what remains undisputed is that we have a huge unemployment problem in the country. The hardship of the jobless makes the story of a Johannesburg father who found a way not only to find income for himself, but started creating jobs for others in just six months, is particularly moving. He is Itumeleng Lekomanyane who took the last R800 he had that was supposed to go for maintenance for his daughter and started a sandwich business, which he managed to grow quickly and now he even employs other people. Itumeleng gave it a modern spin; he told Biznews that he uses social media to promote his business and get feedback from his customers to improve his products. – Linda van Tilburg

This business came about; it was last year around August. I was sitting at home unemployed and had not been able to find work for two years. I used to have another business, it was embroidery and printing, and I was basically designing school uniforms before that but the business was seasonal, which meant that there was a busy period from January to June, but after that there was virtually no trading. I was sitting at home for the longest of time thinking about getting a job, which I was not able to. I wanted to do something that would give me an income on a daily basis without me having to worry about not being able to take care of my daughter; not being able to pay the rent.

So, I decided to start selling sandwiches, because it was not something that you found on the streets of Johannesburg and I wanted to be original. I used social media, Facebook and Twitter and “my posts blew up” and I managed to get support from people I did not even know and people on social media keep on supporting me.

I have the busiest of days. I start the day at 4am; we wake up and I drop off the guys at the four stations that we have, at the MTN rank in the Johannesburg; the second one is at Bree taxi rank and we have a third at Standard Bank at Simmonds street. I have just opened a fourth station at Auckland Park where I am trying to build a new customer base and where I am trying to build a positive customer relationship. I create employment wherever I go; I am trying to create as many jobs as I can, and I want to help the youth to end the stigma around unemployment.

Looking for unemployed 2 energetic youth’s around JHB CBD to start work next week selling #SandwichNtonNtons with production increasing help is needed.
Shifts start at 5 am end at around 9 and don’t want excuses about taxis being delayed and all that…RT so they see it

What is the best-selling sandwich?

It has to be the Dagwood, the beef sandwich, which is like a burger with basic veggies inside and cheese and a wonderful sauce. We sell muffins and scones as well that is made by my business partner. They are all homemade and everything is made by ourselves.

I looked at your Twitter page and your customers post suggestions to you. One told you to get a toaster; the other complained about a warm beef patty on salad and said, ‘make sure it is not hot’.

I got criticism on Twitter both positive and negative when I started. There was a stage when we used newspapers to lay out our bread and some said that was a health risk, which we did not agree with. I took all of that on board. At first, we were not toasting our bread, but I got toasters. We did everything that is necessary to make sure our customers were happy.

Oh, like, ‘Good people deserve a good breakfast.’ That is my biggest aim, I want to inspire the youth out there and show them it is possible for a black child to actually make something out of themselves and take themselves out of the situation they face every day.

Tell me about the business; how many sandwiches do you sell per day, or month. 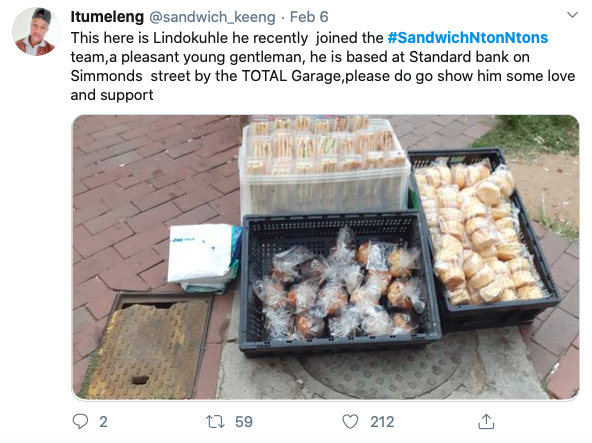 What are your expansion plans?

We are looking at getting food trucks in the near future. I want to go to all the big events that take place at stadiums and then eventually a few hundred coffee shops around the country. The idea is to create more employment and ultimately to be one of the biggest entrepreneurs in South Africa.

I’ve heard you have an interesting sleep pattern? Tell us about that.

We sleep during the day. So, most days we will sleep between 1 pm and 8 pm. We then wake up and start the production of the sandwiches for the next day. We work until about 3 or 4 am; have a shower and then we head off.

How many people do you employ now?

It’s me, my business partner and two other guys.

Thank you Itumeleng. Best of luck and I hope you end up with your food trucks.