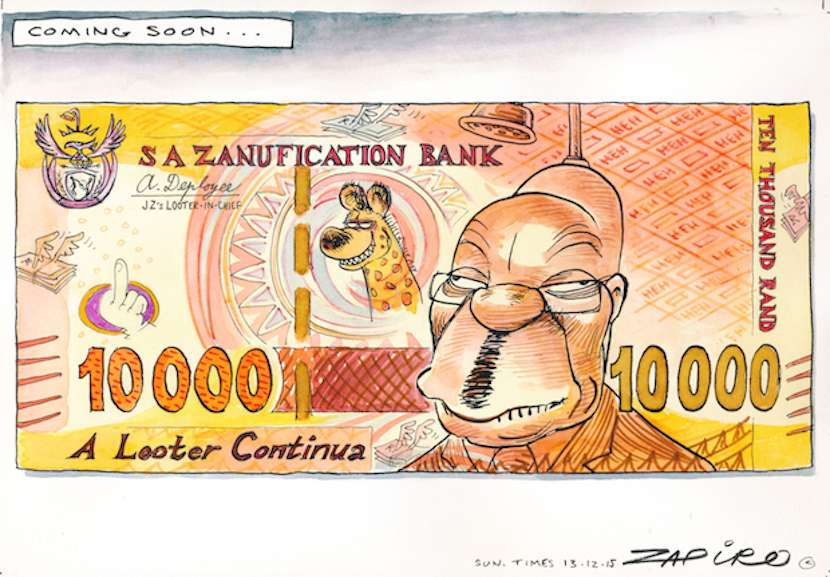 EDINBURGH — Bruce Koloane, Ambassador to the Netherlands, has no shame. After being demoted for working in Gupta family interests by helping them to land a private plane at an airforce base, it didn’t take him long to find his way into a senior state job  – and continue doing the same thing again. Only this time, Bruce Koloane is doing much more than allowing the Gupta family to use state property as their own. He is actively involved in negotiating global business deals for the Guptas, even though he draws a salary as a South African diplomat. – Jackie Cameron

Bruce Koloane took the blame for Guptagate, the scandal in which the Gupta family was given permission to land a private jet carrying wedding guests at Air Force Base Waterkloof. But it didn’t take long for him to bounce back and be rewarded for carrying the can.

The former chief of state protocol, Bruce Koloane was demoted to liaison officer after Guptagate, but he was soon on the rise in government circles. He landed a diplomatic posting in the Netherlands in 2014. Since then, he has continued to serve the Guptas instead of the taxpayers who pay his salary.

The role of Bruce Koloane in the Gupta family’s global business empire has been highlighted in the #GuptaLeaks, a treasure trove of emails leaked from the heart of the Gupta operations in South Africa.

The ace team of investigative journalists at amaBhungane have unearthed evidence firming up Koloane’s activities. The revelations underscore that South Africa has become a kleptocracy, with state officials in and outside the country abusing their influence and positions to oil the Gupta machinery.

The Gupta brothers immigrated from India and have used money to transform former freedom fighters, journalists and others once respected for making personal sacrifices in the national interest into corrupt thieves focused on self-enrichment.

The extent of state capture is so overwhelming that the state law enforcement agencies appear unwilling or impotent to act against the Zupta gang.

Bruce Koloane is one of an army of corrupt state officials who serve at the feet of the Gupta brothers.

The #GuptaLeaks, says amaBhungane, show that:

President Jacob Zuma’s son Duduzane Zuma is a key figure in the #Zupta campaign to siphon funds out of state coffers. This is apparent as the investigative teams at amaBhungane and Scorpio make sense of correspondence contained in the most sensational information leak South Africa has possibly ever seen. The emails, dubbed #GuptaLeaks, contain evidence that prove allegations that President Jacob Zuma has allowed an immigrant family to pull the levers of political power and raid state coffers. Zuma’s son has been working directly with the Gupta family, using the Zuma name to further Gupta interests and living the life of a rich person as the benefits flow back to him. International money-laundering and tax evasion are in the mix as are hints that President Zuma has been making moves to live elsewhere.

The Gupta family’s ambitions to take control of South Africa’s state-owned enterprises has no limits, it seems. They had their collective eye on funds in South Africa as well as huge sums of foreign currency generated in arms deals. The #GuptaLeak emails – records from the heart of the Gupta business empire – help solve the mystery behind Denel Asia, the controversial arms marketing partnership that National Treasury has tried to block, say journalists working through the correspondence.

At what point do you become captured by the Gupta family? When you accept a gift? Or when you enter a business deal with them? President Jacob Zuma’s powerful presidential advisor Lakela Kaunda has revealed that she was once on the Gupta payroll and has discussed various business roles linked to the Gupta empire, yet she claims she is not captured.

The family of Ace Magashule, Free State Premier, has been caught and captured in the Zupta net. This is evident in the #GuptaLeaks, a massive data bank of emails shared with independent journalists in what is the biggest information leak in decades. The Gupta family has cast its net far beyond the Zuma family to use patronage to secure a steady flow of state funds into its coffers. In this exposé, the journalists at amaBhungane detail how the Guptas used travel and luxury treats to win over Ace Magashule and sons. Also having fun on at least one extravagant junket was controversial mining minister Mosebenzi Zwane.