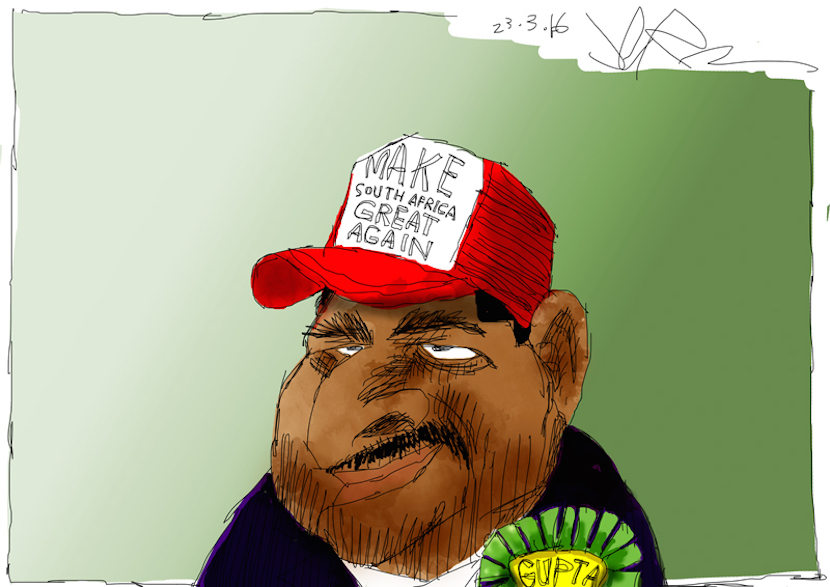 EDINBURGH — The family at the centre of state capture allegations is best known for enriching itself at the expense of the nation. But, as the Gupta racism row indicates, they are an unpleasant bunch even when they aren’t following the money. The #GuptaLeaks confirm that the Gupta family had racist and sexist hiring practices. It was no coincidence that waiting staff were white at the controversial Sun City wedding. There are also reports that Gupta and associates were hoping for white staff at a spa – and a dear old white lady to help them with their books. – Jackie Cameron

On the one hand, President Jacob Zuma, the Gupta family and friends have been pushing to create a white monopoly capital myth to sow distracting division while they raid state coffers. On the other, it is a case of the gentlemen prefer blondes waiting on their tables.

Reports of racism from the Gupta family have surfaced before – but the #GuptaLeaks sets out the details in black and white.

The journalists at amaBhungane and Daily Maverick’s Scorpio unit have been sifting through thousands of emails leaked from the heart of the Gupta empire.

As they piece together evidence of a systematic campaign to capture South African state entities in order to secure a steady stream of income into Gupta entities, other details have emerged about the family at the centre of the corruption scandals – like their racist hiring policy.

“Reports of racism from the Gupta family have surfaced before, notably in the aftermath of the 2013 Sun City wedding when it was alleged that the Guptas insisted on having only white staff fill certain positions. At the time, the Gupta family rejected these allegations “with contempt”. New evidence from leaked emails shows, however, that the claims were entirely true,” say Scorpio and amaBhungane.

The Gupta men like their events to prominently feature attractive women, say the independent investigative journalists.

Emails sent before major Gupta functions reveal that it was standard practice for ‘hostesses’ to be hired from modelling agencies, with the agencies sending through photographs of potential women in advance to be selected or rejected.

“Please see below the profiles of girls that have confirmed availability,” read an email from one such agency in August 2014. “I need to get more white ladies.”

That statement, says Daily Maverick, could be read innocently, were it not for the fact that there is some evidence from the leaked emails that the Guptas had a distinct preference for hiring white people in certain areas.

Flashback to THAT wedding: Making it a white wedding

The wedding of Vega Gupta at Sun City in 2013 is the event that brought the Zupta relationship out into the open. This is because the Gupta family was allowed personal use an airforce base when it jetted its guests – including some it was working on capturing – in for a luxury affair.

However, the #GuptaLeaks show that not only was the wedding an obscene exercise in flaunting money, it was a seedy affair from a human decency perspective.

“In response to a phone conversation with Tony Gupta, an agency called Heilbron Hospitality sent through a quote for staff hire on 22 February, 2013. Under ‘Terms & Conditions’, it states: ‘Heilbron Hospitality confirms the provision of all Caucasian staff, with the majority of the waiters and a few of the butlers being female staff.’

Evidently Tony Gupta wasn’t taking any chances about the complexion or gender of the waiting staff, replied to the email on the same day: “Please clarify total staff gender and race…”

A Heilbron employee wrote in response: “ALL staff are white! I included this point in the final quote. Butlers: 8 Male & 3 Female. I would have liked more female but with butlers it is a challenge. Waiters: Majority will be female. I am trying for at least 30 female if not ALL 40 female!”

more reports today of anti-black racism at Gupta family wedding at Sun City. Family's response: we were "happy" with our "African butlers"

Gupta approved, signing off on the quote.

Other signs of racist requests include:

The Guptas have employed many black people and have denied all allegations of racism. But, another email, sent by a black Gupta employee in September 2014, claimed that the family treated its black workers especially poorly.

In the email, says Daily Maverick, employee Tshepo Masilo berated the family for the meagre contributions they made to the families of employees who died in their service.

“The Gupta family is very wealthy where you are able to spend more than R100m for a wedding at Sun City and yet you are unable to even give your poor employee who died without even earning a decent salary a good send-off,” Masilo wrote.

“It is very disappointing and hurting to see how you spent a lot of money donating to political parties and hosting events for very high profile figures and rulers of our country and yet you do not take care of your struggling and lowly paid employees especially blacks.”