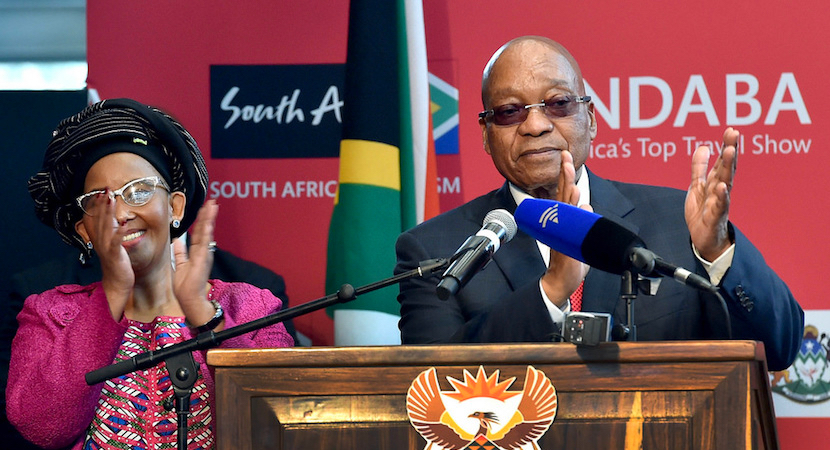 EDINBURGH — The operators over at London-headquartered public relations firm Bell Pottinger have no scruples when it comes to choosing who they work for. This was evident when Richemont boss Johann Rupert revealed that he was the focus of a politically motivated smear campaign developed by Bell Pottinger’s team – the very people he hired earlier to do his PR work. It also emerged that Bell Pottinger partner Victoria Geoghegan was instrumental in developing a ‘white monopoly capital’ myth to distract the nation from the real economic villains, namely President Jacob Zuma and the corrupt gang running the South African government. All of this dirty work has been at the behest of the Gupta family, with the president’s son Duduzane Zuma negotiating the details with Geoghegan. Highlighted this week is the astonishing scope of Bell Pottinger’s greed. It turns out that Bell Pottinger was hired to sell South Africa to the international community for SA Tourism. Happy to take taxpayers’ money for that contract, Bell Pottinger omitted to declare that it has been actively working against South Africa’s wellbeing and reputation for another client by helping to push the state capture agenda. Although SA Tourism Minister Tokozile Xasa says the relationship with Bell Pottinger has ended, that’s not what Bell Pottinger executives think. The controversial PR company has included SA Tourism on a list of its current clients in a brag about a new division it has launched to grow its business (scroll down to see the latest Bell Pottinger press release ‘featured’ on its website). Who is telling a lie? – Jackie Cameron

While under this contract, the company did work for the Guptas.

Tourism Minister Tokozile Xasa revealed this on Monday, in reply to a parliamentary question from the DA.”Bell Pottinger LLP was appointed by the SA Tourism UK Office for a period of 3 years, effective 1 January 2014 following an open tender process in the UK.

“The services were for Public Relations including Digital PR and Online Communications to complement and align to existing media buying, events and social media services in order to complete a 360°consumer and trade engagement,” reads the answer. The UK tender had been reissued and a new service provider would begin on July 1. The contract was procured at R8 611 281, but in the end R 9 600 858 was paid due to currency fluctuations.

DA MP James Vos said it was a disgraceful conflict of interest for Bell Pottinger to be on the government’s payroll while the Gupta family was using it to “sow racial division” in the country.

“No ethical firm could accept business to both advance and damage a country at the same time.”

Vos said he would write to the tourism committee’s chairperson, Beatrice Ngcobo, to ask her to call Xasa to justify the amount spent on Bell Pottinger and to table the full contract with the company.

In December 2016, South African businessman Johann Rupert revealed that Bell Pottinger was behind a campaign linking him to white-owned monopoly capital and state capture. He cut his business ties of 20 years with the company.

Last week, it emerged how Bell Pottinger’s Victoria Geoghegan met President Jacob Zuma’s son Duduzane to devise a campaign aimed at selling a “narrative that grabs the attention of the grassroots population who must identify with it, connect with it and feel united by it”.

This was part of attempts to counter revelations in thousands of emails leaked from the Gupta family, which expose their alleged interference in government and state-owned entities in order to promote their business interests.

Bell Pottinger reveals it is still on the SA Tourism payroll – on its website:

Bell Pottinger has today launched a new practice focused on tackling some of the most pressing business challenges facing brands in today’s communications environment.

Bringing together its corporate, brand, consumer, digital and design teams, the company has created Engage by Bell Pottinger, a new integrated practice focused on providing consultancy, campaigns and content to its clients.

The integrated offer was unveiled today at an event for senior marketing and communications professionals, sharing insights on the ‘new rules of engagement’ that will help brands tackle challenges, such as ‘hyper-fragmentation’ and an ‘on-demand’ consumer culture.

Hugh Taggart, Managing Director of Engage by Bell Pottinger, said: “Events of the last few years have drawn a line through many of the assumptions that marketers have worked on to date. With a new year starting, we wanted to re-write the rulebook and reshape our offer to support brands through an era of rapid change, shifting consumer expectations and increasingly complex audiences.”

It will also provide access to the group’s wider portfolio of communications expertise, including financial, political and litigation support services.

James Thomlinson, Managing Director of Engage by Bell Pottinger, said: “Engage has been designed with clients, for clients – reflecting the challenges and pressures we share with them every day. This new practice is not just about changing who sits where and works with whom, it’s about putting a new philosophy and approach to communications at the heart of what we do – powering insight-driven, content-led campaigns that change the behaviour of influencers across every medium.”