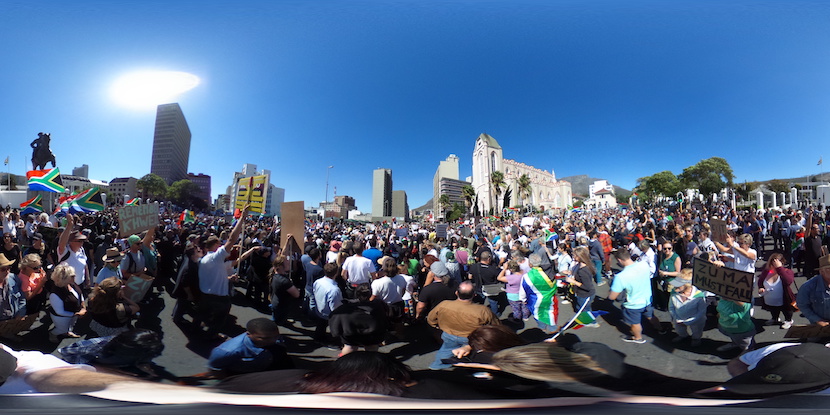 EDINBURGH — The GuptaLeaks emails have exposed the scale of the sinister and lucrative state capture campaign that is generating enormous wealth for the Gupta family, President Jacob Zuma’s family and cronies. Although the state law-enforcement agencies have stood idle as evidence builds that South Africa is a kleptocracy – run by criminals for personal gain – citizens are taking a stand. Protest action is slowly building in the social media, while others are using their democratic right to freedom of speech to take a stand against the corrupt president and his crooked friends who are working against the national interest. Add your voice! – Jackie Cameron

South Africans have reacted with outrage as the GuptaLeaks emails expose the breadth and depth of the sinister and lucrative campaign by President Jacob Zuma and the Gupta brothers – dubbed #Zupta – to capture state assets for their own gain.

The scale of the Zupta state capture strategy is breathtaking. A vast number of South African politicians, civil servants and public company bosses have been compromised and caught in the net, including at embassies across the globe.

As Titanic Redux pointed out here on BizNews: this has been a case of

Investor sentiment has turned negative, with a ‘car crash interview with captured finance minister Malusi Gigaba sparking a decline in the value of the rand.

Noted BizNews visitor Peter Francis Womersley: “Well Gigaba has certainly worn his colours playing for Zupta team Certain to score an own goal for the country!”

Responding on BizNews founder Alec Hogg’s Facebook page, Gina Good said: “So devastating!!!! Cry our beloved country ? When will sanity and rationality prevail to make the ANC comprehend just how much damage they have allowed the Zupta brigade to cause to SA?”

Billions of rands have flowed into the hands of the Guptas and friends at the expense of taxpayers as well as bona fide business operators who have been tripped up by compromised officials.

The #GuptaLeaks have revealed that the masterminds will go to any lengths to get what they want – from stirring up racial animosity through carefully orchestrated anti-white political and media campaigns to spying on Zuma critics.

“And the one Idiot responsible for all this, is still called ‘His excellency, the honorable president of South Africa”, by ANC MPs. I cringe in shame every time someone calls this traitor the president of SA.”

Opined retired civil servant Jack Klock, on seeing a list of 10 bosses at Eskom, Denel and other entities who are evidently captured by Zupta: “I have seen and do not see anything noble in the ANC. Just a gang of grubby, greedy men and women who lie to everybody – even themselves – and who have no honor. They will soon end up on the trash heap of history.”

The stench of Zupta corruption has expanded beyond government, with the Guptas having worked hard over more than a decade to compromise sports personalities, including Proteas players, journalists and others who might be of use. (For more, read: Moneyweb editor Thompson explains how he was played for a fool by Bell Pottinger to push WMC plot.)

While the law-enforcement agencies have largely turned a blind eye to overwhelming evidence in the public domain that a range of serious crimes has been committed – from fraud and theft to illegally spying on citizens – South Africans are fighting back.

Private citizens and civil society groups are looking at stepping in to bring the captured and corrupt to book to shake loose the kleptocracy.

Angry Saffers have turned to the social media to protest against the UK-headquartered public relations company Bell Pottinger, who has engineered the “white monopoly capital” myth for Zuma to use to distract his naysayers.

On hearing that Bell Pottinger was paid R5,5m for one weekend to help the ANC Youth League and MK military veterans prepare anti-white comments, a bemused Earlymorrningcoffee commented: “The ANC needed help to identify racists slogans. I always thought that was their expertise.”

James Groenewald registered dozens of likes for this observation:

“If ever there was a metaphor for white domination, a white English woman correcting the political composition of the MKVA leadership must be it. Fanon and Biko are spinning in their graves.”

Stephen O’Hagan had a similar observation. “Until now it had not occurred to me that none of the Gupta Companies are run by a Black South African as far as I know. How is this possible?” he asked, under It’ll be all white on the night: Gupta racism in spotlight.

Under an article about how Mineweb editor Warren Thompson was “taken for a fool” by Bell Pottinger, Johan Kruger said former Independent group editor and Oakbay boss Nazeem Howa should face prosecution. “He was knowingly involved in fraud and extortion with Brian Molefe et al. Ducking and running should not excuse the slimeball,” said Johan Kruger.

Bell Pottinger locked its Twitter account after South Africans mocked and replied to tweets even when posts were related to the UK. But that was not an obstacle for angry Saffers determined to bring down Bell Pottinger for sowing racial division in the name of profit.

Social media activist John Paul posted this advice to kindred spirits: “Now that they have locked their accounts report them to Twitter … 1) Open BP/James Thomlinson 2) select settings button (cog icon) 3) select ‘Report @ …. 4) select ‘They’re being abusive or harmful’ 5) select any of the first five of the six options … ‘Directing hate against a race, religion, gender or orientation my personal favourite.”

Sam drew many likes from BizNews visitors for this rallying call: “We all need to stand firm and beat away these criminals. We need to use our laws, our courts, our business institutions and the power we all have as citizens to take to the streets vote these people out and put them behind bars.

“We have the power – lets stop paying our taxes over to these people. But, we must not forget these people….. these names. they must be pursued, brought to trail, forced to pay back what they are stealing,” added Sam, posting under Tools of destruction: Public Protector, Malusi Gigaba ‘car crash’ interview knock the rand.

Odilo von Steinitz appealed for smart thinking on how to topple Bell Pottinger: “Let’s not be distracted by assorted minions like Victoria Geoghegan, and ask the really important question: “Who is really behind Bell Pottinger where it comes to ultimate ownership and operational direction?”

Observed Martin of the bigger picture: “Victoria is one among many in the corporate world, including the Guptas but also including many in more supposedly “ethical” companies, who have no social conscience – the bottom line, and how that affects their own pocket, is all that matters.” He was commenting on the article: ‘Evil mastermind Victoria Geoghegan: How does she sleep at night? #GuptaLeaks’