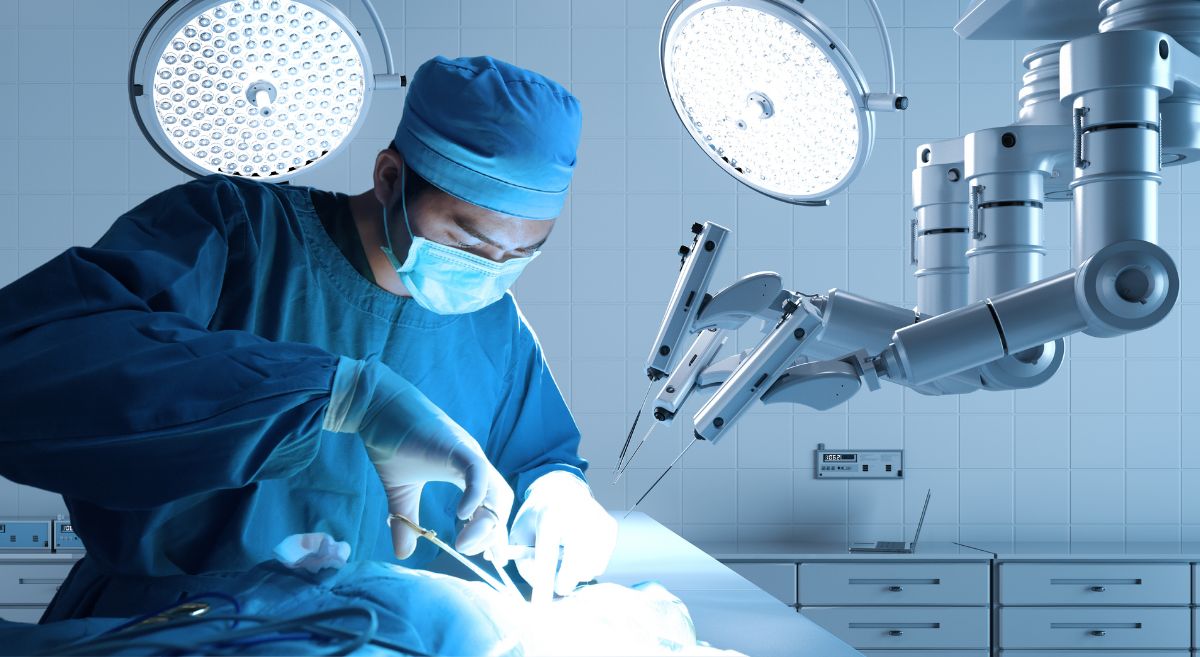 In an unintended nod to Christiaan Barnard, the South African cardiac surgeon who performed the world’s first human heart transplant operation, Barnard’s namesake hospital in Cape Town has established the first cardiothoracic robotic assisted surgery programme in Africa. “This will allow more patients to receive state-of-the-art, world class, evidence-based treatment,” says Dr Johan Van der Merwe, the thoracic surgeon leading the programme. While the robotic technology cannot operate independently yet, the chances of this becoming a reality at some point in the future are becoming much more likely. This article first appeared on Med Brief Africa. – Nadya Swart

In a first for the continent, a cardiothoracic robotic assisted surgery programme has been established at Netcare Christiaan Barnard Hospital to provide less invasive alternatives for procedures involving the chest cavity, including for lung cancer and cardiac surgery.

Visiting UK cardiothoracic surgeon and lung cancer specialist Dr Joel Dunning of James Cook University Hospital, in Middlesbrough, UK, oversaw the procedure to remove a rib in a thoracic outlet decompression surgery in a 33-year-old man for the relief of pain and restricted movement.

“We are grateful for the opportunity to establish this platform, which will enable our cardiac and thoracic surgery colleagues across the country and elsewhere on the continent to provide robotic surgery as an option to their patients. This will allow more patients to receive state-of-the art, world class, evidence-based treatments,” says Dr Van der Merwe, who gained significant exposure to robotic techniques during six years of training in the UK and Belgium and completed intensive training on the da Vinci system.

Internationally, lung cancer surgery is one of the most common applications of robotic technology in thoracic surgery. Often these patients tend to be older and frailer, and therefore require a more delicate, less invasive approach.

“Many cardiothoracic procedures traditionally involve either sternotomy or thoracotomy, where the chest is opened through the rib cage. This necessitates a lengthy recovery period, often with significant discomfort for the patient. The use of robotics technology, however, allows for intricate procedures to be performed deep within the patient’s chest without the need for large incisions, splitting of the sternum or opening the chest through the rib cage,” Dr Dunning explains.

Dr Van der Merwe operates using the da Vinci robotic console as an extension of his fingers and hands, enabling the intricate operation to be performed much less invasively through small punctures in the patient’s chest while having excellent 3D and magnified vision. “It is important to note that the robotic technology is not able to do anything on its own. Rather it is a tool fully controlled by the skilled surgical team at all times,” he said.

The first patient to undergo a robotic assisted thoracic procedure in Africa was Etienne Nel, a former semi-professional electronic sports gamer who implements software systems for maintenance programmes and is at present completing his master’s degree in Philosophy of Applied Ethics.

“Four years ago, I started to notice some pain around my shoulder, and as time went on, I began feeling discomfort and ‘pins and needles’ in my right arm and hand. Through a process of elimination, I was eventually diagnosed with thoracic outlet syndrome, and by this time it had also begun to restrict movement in my right arm,” Nel says.

“I spend a lot of time working on the computer, and I also enjoy physical activities such as swimming, Pilates and yoga, but these activities were becoming increasingly difficult. I could feel I was losing strength in my right arm. It had reached the point where I realised something needed to be done. I found Dr Van der Merwe, who diagnosed the condition and discussed the options available to me.”

Dr Van der Merwe explains that the nerves and blood vessels to Etienne’s right arm were being pinched between his first right rib and his collarbone, impeding sensation, motion and also the drainage of blood from his arm. “Instead of cutting above his collarbone through sensitive muscles, operating with this minimally invasive technology allowed us to gently remove the top rib on the right-hand side to relieve the compression of the nerves,” Dr Van der Merwe says.

Nel was ready to be discharged the following day and says he had already regained a good range of movement on the first postoperative day. “I could feel the punctures where the robotic system’s instruments entered my body, but the recovery is going even better than I expected. I am already able to get out of bed and using my computer,” he said, just four days after having his rib removed.

According to Dr Dunning, international studies indicate that a robotic approach to cardiac and thoracic procedures tends to offer quicker recovery times when compared with open surgery.

“Typically, patients having traditional open surgery for lung cancer would need to spend five days in hospital and may be unable to drive for a month or more. Whereas, with robotic assisted thoracic procedures the patient’s recovery time is usually much shorter, with only two to three days in hospital and, in many cases, the person is able to drive and return to work as soon as the following week,” Dr Dunning says.

“Establishing cardiothoracic robotic surgery is also a significant development for cardiology patients, as it has applications including single or multiple vessel coronary bypass in combination with cardiac stents as a hybrid coronary artery procedure,” Dr Van der Merwe says.

“In coronary artery revascularisation, for example, the da Vinci robotic system can be used to harvest internal mammary artery conduits, after which the bypass operation is performed minimally invasively through a small incision. The remainder of the procedure is completed with stents.

“Through state-of-the-art technology, experts like Dr Dunning can participate in an operation from abroad, while having full visualisation of the theatre setup, the robotic components and the operative field in real time. This allows us to further develop our skills and build our local programme to bring the advantages of global developments in cardiac and thoracic surgery robotics to patients from South Africa and beyond our borders,” Dr Van der Merwe concluded.